Destination Siroy
A conservation program to protect Manipur's state flower is limiting the loss of its habitat, but community-wide efforts are needed to sustain the efforts in the long run. Kanchi Kohli reports.
01 September 2004 -

My first sight of the 2570-metre-high Shirui Hill was from Shirui village in Ukhrul District of Manipur. From then on, I knew that each step would bring me closer to the rare and endangered Siroy Lily, Manipur's state flower. I was, however oblivious of the array of other observations that it would bring with it. By the end of my trek, I had experienced far more than just the flower in full bloom; it was also an understanding of the severe pressures of tourism in its habitat, as well as the conservation attempts that are being made to address them.

Shirui peak (and the lily) are known by different names, each slightly different from the others: Siroy, Shiroi, Sirohee, and Shirui, the last one being the local pronunciation. It is part of the Shirui-Kashong range which is proposed to be a National Park under the Wild Life Protection Act 1972. It is one of the only two places in Manipur that the Siroy Lily is found, and even here only for a couple of months following mid-May every year. The area is also known to be inhabited by endangered bird species like the Blyth's Tragopan and Mrs. Hume's Bar-backed Pheasant or Nongyin, Manipur's state bird. 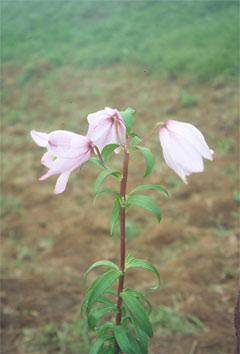 To my disappointment, throughout the two-hour trek up the hill, we were accompanied by three busloads of young students from around the area. Everyone heading towards destination Siroy! There was loud talking and even blaring music, definitely not what I had looked forward to. There are hoards of visitors during the peak season when the lily is in bloom, and the huge tourist traffic is to be expected.

Thankfully the expanse of the forest and meadows allowed some solitude and an opportunity to absorb the place. And at the very end, the sight of the lily and its habitat was spectacular. The misty and cold hilltop was strewn with the lilies, single, in pairs and sometimes even in a bunch of three. I was told that on rare occasions, even five of them in a bunch can be seen. All this with white rhododendron trees, numerous Irish wattii, and a plenty of other micro-flora. It was a sight one could get lost with.

But the moment the sensibilities returned, one could only see a number of boys and girls trampling all over the flower's habitat. And despite enough signs pointing towards the need to conserve and protect the habitat, many of them had also decided to pluck a couple of these to present them to their 'loved ones'. Such unthinking disregard for the flower's conservation cannot continue much longer; already those who regularly trek up the hill to be among these lilies have reported a serious decline in its numbers over the years. The Siroy Lily endemic to the region is now under serious threat.

Fortunately, there are some safeguards now being put into place. The Mungleng Vathei Hill Development Society (MVHDS) has volunteers checking people's belongings all throughout the trekking route. Nobody is allowed to even carry a blade of grass or leaf out of area. Within the flower's habitat itself, there were volunteers imposing a straight fine on anyone who plucked a lily. One ignorant student, to his disbelief, had to cough up Rs.500. The only unfortunate part here is that those lilies already pulled out from the earth cannot be returned to their original places. So, while the fine is harsh, it is mostly a deterrent to the next misdemeanour. It might have been helpful, also, for the volunteers to caution all visitors about the fines at the beginning of the trek, where the entry fee is collected. I didn't see any of this happening.

Throughout the trek, I observed pits dug alongside the path, with signs indicating that the garbage can be dumped into them. Typically, these contained empty plastic bottles, wrappers from packets of chips, etc. This is an interesting change from the usual bright jarring dustbins that would just not blend in with the place. All the rubbish is later collected by MVHDS volunteers and disposed off elsewhere.

While the fine for plucking the flowers is harsh, it is mostly a deterrent to the next misdemeanour. It might have been helpful for the volunteers to caution all visitors about the fines at the beginning of the trek, where the entry fee is collected.

The society has also launched Project Farm, which was to be inaugurated the day after our trek (on 26th May 2004). The project has with various activities planned; one of them is an attempt to plant the Siroy Lily on the first hill along the trek route, to reduce pressure on the flower's main habitat. This would also enable many tourists to experience it much earlier in the trek, potentially turning back those who had come only to see it briefly. Along the trek, I noticed preparatory work being done for this program.

While appreciating the efforts of the MVHDS, one could not help comparing it to an earlier system. A decade ago, these volunteer activities were handled by Shirui Youth Club, rather than the the Mungleng Vathei clan which now manages the effort. The youth club had representatives of different clans of the Shirui village and acted as a community initiative. It had laid down a code of conduct for the visitors, including the fines for uprooting of plants, grazing, and so on. And the environment here was recognized as a community conserved area as well.

How the change to the new conservation effort happened is not clear, but it is surely unfortunate. My experience of community-based tourism in other parts of the country is that the most critical element in such tourism is that the controls and benefits reside with the community as a whole. When the whole community feels connected to the flora and fauna it is trying to preserve, there is greater purpose in its effort, and often a higher chance of success too. On the other hand, communities are often not homogeneous, and bring their diverse elements together in such common cause itself can be a difficult task.

The Siroy Lily's survival too depends on meeting that challenge. The sense of pride in their flower among the people here is obvious, but a return to community-wide interest in this habitat will be critical to keeping the conservation attempts strong. The current efforts for conservation have clearly helped, but they are only a beginning; more is needed to manage the mass tourism that is expected in the years ahead.

URL for this article
http://indiatogether.org/siroylily-environment