Who's teaching whom?
Akanksha began as an idea to give slum children time and space to simply be kids, to laugh and play. It has evolved into a unique learning environment that not only provides opportunities for them to gain employment but also in the process teaches tolerance and a broader view of the world. Jemma Purdey reports.
01 October 2004 -

A steady stream of children in bright blue, yellow and orange t-shirts pulled over dresses and paired with dusty pants, file into the small hall. It has a concrete floor, ceiling fans and a blackboard. The only furniture is a desk and three chairs set against a wall. With the monsoon making its mark, the room is reduced to a third of its size by several large puddles where the roof above has leaked. The helper didi is busy laying out the coloured bamboo mats for the thirty or so children to sit on. Hands are placed in a prayerful position and minds are turned to their respective gods as they recite the Akanksha welcome prayer, and bid hello to the didis and bhaiyas. Formal notices about parent-teacher interviews, and tickets for the upcoming school musical, are given before the class gets down to work.

An estimated 2.3 million children in Mumbai live in slums and on the streets. Akanksha, a Mumbai-based NGO, aims to provide these children access to a different learning experience from the formal education system with an emphasis on providing a strong education foundation, self-esteem and a good time, as well as preparing them to get a job. The Akanksha curriculum is a 10 level curriculum that uses innovative teaching methodology to teach english, math and values. Akanksha has 24 centres in Mumbai and 12 centres in Pune attended by over 2000 children. 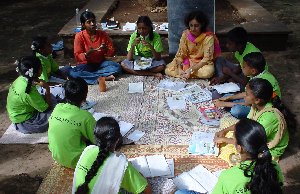 Picture: An Akanksha class takes a lesson in values and decision making.

The children range in age from 13 to 17 years, standard 7 to standard 10, and their capacity in English varies just as much in each of these school levels. The children attend Hindi, Marathi or English language schools and the difference is telling in this particular class where 7th standard kids from the English school have a higher level of competency in the language than 10th standard kids at Hindi or Marathi language schools. But that does not matter now. Here all are equal, including girls and boys; in fact on most days girls outnumber the boys in attendance. This is exceptional considering that literacy rates for females lags greatly behind that for males. The curriculum is a fluid and organic program with a strong social justice and self-development component amongst the core curriculum of English and Maths. Positions in the popular study groups working on environment issues are much sought after.

Having fun and developing their creativity are also key aims. For these children the ability to play, paint and dance are luxuries they would otherwise not have as any spare time is dedicated to family chores or paid work. In a city where the struggle to simply live is a daily hurdle, these children have the opportunity to think and act outside the bounds created by this reality.

It is 3.30 PM and the monsoon rains are pelting the tin roof of the small hall. The high-pitched voices of the children at work bounce off the concrete floor, walls and roof. It is almost impossible to hear, as a group of 7th standard kids take turns to read aloud the story 'Binya and her Blue Umbrellla'. Gauri strides confidently ahead with her paragraph, barely stumbling over a single word. There is great rivalry to get the longest paragraph in the story, so excited are these kids to be reading! In the story, Binya, a mountain girl, comes across a group of city-dwellers on a picnic. They admire the charm she is wearing around her neck and offer to buy it from her, assuming that she will part with it for even a small sum. Binya however is attached to the charm and is reluctant to give it up. That is until she notices the lovely blue umbrella carried by one of the women. She indicates her desire for a swap. The city-dwellers are appalled by her brashness, but in the end consent to the exchange, and Binya walks off with her beautiful umbrella set to become the envy of all in her village.

After reading the story we discuss what it means. In an exercise known as 'creative connections' the kids draw parallels between the story and their own lives. Has anyone ever offered you money, or made assumptions about your needs? Has there ever been a time when you have desired something that belongs to someone else? The responses are wise and knowing. The lessons the children took from the story were, 'Material things are not everything', 'Don't be jealous of others', 'Share what you have'. Who is teaching whom here?

On the other side of the room the 10th standard kids are constructing essays on their chosen topic, 'A collision between a cow and a cab'. Again they draw on their own 'real life' experience to recall horrific tales of taxis ramming into cows as they wander haphazardly across the roads. In each case the taxi driver is at fault, and even in the case that the accident was clearly just that (the cow was being chased by a dog and dashed onto the road), the consensus was to punish the driver with a fine, arrest or local methods of mob justice.

The kids are already very aware of their identity vis-a-vis classmates from other religions and other regions of India. It is clear to see that the Akanksha program of promoting harmony and tolerance is set against an altogether different mindset communicated by parents.

The eagerness with which the children tackle each task, especially the girls, is exciting and contagious! After all is has to be remembered that they have already attended their regular school for five or six hours before the two hours they spend here. Their sources of sustenance and nutrition are obviously also questionable. Yet Akanksha has made a point of not providing the kids with any food at the centres. They want the kids to come, and their parents to send them, for education only. This is not a source of handouts. Learning is the only motive for showing up each day.

The kids are extremely street-smart, as one would expect them to be - after all that's where they live, in makeshift homes on the pavements or in one of the hundreds of slums that fill every unused surface in Mumbai. At once there is an eagerness to form a new friendship with this strange ferangi who has come to help them improve their English, but also a wariness to trust. I find myself watching my words. Any commitment I make, promise stated, however small or large will be remembered and replayed to me. It is a contract that these kids will not enter into lightly, and therefore nor should I. Will you bring a copy of your photographs for me? Will you come to my house for dinner? To fail to honour a promise or appointment is a strike not only against me but against their own sense of dignity.

As comfortable as we are with each other, I also feel acutely the difference in our standards of living. The kids are constantly inquiring about where I live, in a hotel, a house? What time to I get up? Do I take taxis, buses or walk? I understand that these may simply be questions one would ask of a new friend, but I at the same time I am guarded in my responses. In response to 'what time do you get up?' I quickly pondered on my 9 o'clock rising hour and leisurely hot shower and thought the better of it, shooting back 'what time do you get up?'. Surely enough the answer was 5 AM with the additional 'to collect the water'. As time has gone by and we have each got more familiar with the other I have felt increasingly comfortable providing answers to their questions asked out of a curiousity comensurate with their desire to learn more about the world around them.

However, one of the most challenging things about India, and something I may never understand as a non-Indian and as someone from the developed world, is how the upper middle and elite classes deal with this yawning gap, or as writer Arundathi Roy puts it, 'several centuries at the same time'. The challenges loom large as soon as you descend from your modest but comfortable apartment and onto the street where a thin sheet of plastic has kept an extended family dry for the night. Roy suggests India is a microcosm for the world's disparity and where 'your face is slammed right up against it.' She suggests that this is indeed a confrontation not only for outsiders like me, but for all Indians, 'To address it, to deal with it, to not deal with it, to try and understand it, to insist on not understanding it, to simply survive - on a daily, hourly basisis a fine art in itself. Either an art or a form of insular inward-looking insanity, or both'.

The kids at Akanksha are Muslim, Christian and Hindu. Religion, if at all, is treated in a very generic manner, where the values taught are basic humanitarian principles and morals. But this is not to say that the kids aren't already very aware of their identity vis-a-vis classmates from other religions and other regions of India. In very small and subtle ways the Hindu kids reveal their awareness of the difference between them and their Muslim neighbours, for example. It is clear to see that the Akanksha program of promoting harmony and tolerance is set against an altogether different mindset communicated by parents.

The kids are also extremely politically savvy. When a team of labourers pulled up outside the hall with a trolley-load of exercise books the kids immediately identified the donors by the symbol on the cover of the books  the upright hand of the Congress Party. Some of the older ones sniggered and agreed that it didn't matter who donated them, as new books are always needed. One of the quieter girls in the class, Achana, then opened her book to show me a flyer pasted there. The characters were indecipherable for me but the symbol of a tiger, I recognised. "Do you know Shiv Sena?" she asked me. In a city that is groaning under the strain of 13 million people, with one thousand new ones arriving everyday, the infrastructure and public services for slum dwellers are non-existent. Shiv Sena fills this void by providing welfare and employment services; its ambulances are a welcome sight in a city of very few emergency vehicles. For millions of other Indians, their politics is questionable, but Achana's needs are quite real too.

Akanksha began as an idea to give children like these time and space to simply be kids, to laugh and play. It has evolved into a unique learning environment not only providing opportunities for them to gain employment but also teaching tolerance and a broader view of the world they live in. As the class descends from its high-pitched frenzy to a subdued assembly they say a final prayer of thanks to god and to the didis and bhaiyas for their help. I leave the hall and accompany them down the laneway to their bus, feeling certain that it is I who should be thanking them.

Jemma Purdey worked as a volunteer at the NGO Akanksha in Mumbai. Akanksha runs after-school schools for children living in the slum areas of the city. She lives in Melbourne.

URL for this article
http://indiatogether.org/slumteach-education