CLEAN ENERGY
Solar Mission: More light needed
The government's focus on solar energy is driven by the need to demonstrate a commitment to renewable energy. But equity too is vital for the success of the National Solar Mission, writes Sujatha Byravan.
18 May 2010 -

Starting in the late eighteenth century, fossil fuels such as coal, oil and natural gas have been extracted from the earth and burned in engines to feed economic growth. But, with growing awareness of the risk of human-induced global warming, there is pressure on all countries to increase their reliance on renewable energy sources such as solar and wind. There is resistance to this - rich nations do not want to lower their living standards or change their lifestyles and poor nations would like some liberty to go on burning fossil fuels for a while if it helps to get more of their citizens out of poverty.

The challenge that many developing countries, including India, now face is to redefine their strategies for development while embarking on a path that relies primarily on clean energy and still delivers growth. But can a low-carbon development pathway improve living standards such as access to clean drinking water, sanitation, education, health and life expectancy? Can we have development for all even while we reduce our emissions?

The National Solar Mission (NSM) is one of eight missions launched by India as part of The National Action Plan on Climate Change (NAPCC), which identifies measures that promote India's development objectives while addressing climate change effectively.

India has set the ambitious goal of achieving 22 GW (22,000 MW) of solar energy capacity by the end of the XIIIth Five Year Plan in 2022. This goal has several other targets: It aims at 20 GW of grid-connected capacity made up of large photovoltaics (PVs) and solar thermal power plants and smaller rooftop PVs; 2 GW has been set aside for off-grid solar plants; 20 million sq. m. of solar collectors for low temperature applications; and 20 million solar lighting systems for rural areas.

There is no mention of the amount of subsidy needed in the NSM document, but the subsidies that would be necessary for Phase I (2010-2013 period) targets can be calculated and would be in the range of Rs.82,000 crores, a net present value of Rs.36,000 crores, with over half coming from high consumer tariffs and the rest from budgetary allocation.

Get the model right

The mission still needs much improvement. Most of the proposed subsidy in the NSM will go into grid-connected large solar plants that make up a significant portion (20 GW) of the proposed increase in solar capacity. To justify this largesse, these must at the very least promote innovation in indigenous solar manufacturing and technology development, minimise costs to consumers, and ensure social and local environmental sustainability. There is as yet no roadmap for these. 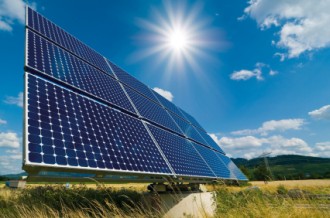 India has set a seemingly ambitious goal of achieving 22 GW (22,000 MW) of solar energy capacity by the end of the XIIIth Five Year Plan in 2022.

The government is also offering a feed-in tariff, which is a fixed preferential tariff to incentivise high cost solar electricity. However, in order to ensure the lowest cost to consumers, these tariffs need to be properly designed (tariffs proposed by the Central Commission seem higher than justified), or be discovered through a competitive bidding process with a ceiling tariff.

Furthermore, there are several social and environmental considerations to be made since solar electricity generation requires a lot of land, implying acquisition costs and resulting social impacts. Similarly, water is used for condensing the steam in solar thermal technology. Since this technology will be used in deserts and dry areas where water is in short supply, it is important that air-cooling be emphasised.

For some technologies, such as rooftop PVs, we may need a pilot programme first to help us understand how various factors come together in the Indian context. For instance, India has frequent power outages necessitating battery backups. Experience from other parts of the world suggests that the tariffs for rooftop PVs also need to be correctly decided so that they are not excessive, but can still incentivise commercial consumers who have high tariffs.

Need to focus on equity

Notwithstanding robust economic growth for over a decade, about one half of India still does not have electricity. Experience has taught us that trickle-down economics does not trickle down much. Unless the government develops an explicit policy framework that recognises the needs of the poor as a priority, equity considerations will be given short shrift in the proposed low carbon development plan. Eighty two thousand crores is lot of money, but potentially well spent if it manages to bring responsibility into energy management. The NSM will be successful only if it also contributes to the alleviation of poverty and improvement living standards, not if it merely wards off climate disaster scenarios.

Equity is not something to be added and stirred (borrowing a line from feminists) at the end of policy development, but needs to be an integral part of the design in order to work. A recent report from Prayas, an NGO in Pune, shows how the National Solar Mission can be designed to prioritise equity and development needs. This kind of approach is what we need to ensure that the poor and their needs are not left out in the plans for a low-carbon development pathway.

The availability of lighting completely transforms the lives of the poor who have no access to the grid and many of whom still rely on kerosene. Solar PVs for lanterns and home lighting systems offer a good solution to serve this rural population. Such systems can provide lighting and power to homes and public buildings such as schools, support income generating activities, and also provide light, through lanterns, to communities that are nomadic. In order to serve the poor off-grid systems should be made a priority, but there is no evidence that this was done while framing the NSM. The targets for off-grid systems are low, with limited subsidies.

At present, over 40 per cent of rural and over 6 per cent of urban households (NSSO, 63rd round) rely on kerosene as a primary lighting fuel. This works out to around 340 million people whose lighting needs can be replaced with solar lanterns. This would save Rs.3600 crores of the poor, and provide savings of Rs.9300 crores in subsidies and under recoveries for the Public Distribution System of kerosene. It would further prevent harmful health effects from inhaling kerosene fumes indoors and avoid 10 million tonnes of carbon dioxide emissions on an annual basis, worth around Rs.900 crores per year in carbon credits. Quite a lot of benefits in one fell swoop!

But the NSM aims for only 20 million solar lighting systems (and we don't know exactly what mechanism will be used to do even this) for rural areas, which is about one-fourth of the 72 million households that use kerosene today. Given the poor rural electricity distribution systems and the absence of clear plans to remedy this situation in the near future, the poor who are off-grid will be left behind without lighting for an unknown length of time. Indeed, even when they are connected to the grid, the quality is so poor that off-grid lighting remains essential.

Prayas goes further and recommends a substantial change in priorities by the NSM and "a rapid roll out of PV based solar lighting systems for the poor ... from a social, economic as well as ethical perspective". In fact, PV lanterns are an excellent stop gap measure and the government should adopt special mechanisms to promote innovative distribution of these lanterns. With white light emitting diode solar lanterns with warranty and service, we could light up the countryside by selling each for a small sum (Rs.400 each if bought in bulk). Even if the government provided full subsidy, this would amount to Rs.3000 crores, which is only about 8 per cent of the NSM subsidy.

Solar home lighting systems can support small household loads and should be promoted and prioritised through rural financial institutions. In fact, because of the large potential for carbon mitigation in these programmes, international financial support might be readily available. But given the scale and extent of benefits that would accrue for the poor with these programmes, India should not even wait for such support, but begin immediate implementation of these proposals.

In conclusion, solar lighting for the poor needs to be prioritised in the NSM as it brings immense socioeconomic benefits. There is also a natural alignment of PV with decentralised use that meets the needs of poor. We needed a transparent and an inclusive process to formulate the NSM but this has clearly not and happened has resulted in a loss to the poor and marginalised. There also needs to be better coordination between central government and state government policies so that we have a coherent policy on solar energy in the country as a whole.

A realignment of the NSM is therefore needed if we want an outcome that is equitable, environmentally sustainable and remains economically feasible.

URL for this article
http://indiatogether.org/solar-op-ed