As you sow, so shall you weep
With the rains finally here, spurious seeds and other fake inputs introduce a deadly new element in the survival struggle of the Vidharbha farmer. Fake seeds from Andhra Pradesh have come in on a large scale. P Sainath continues his series on Vidharbha's crisis.
30 June 2005 -

There were 14 shops selling seed and other inputs in Mahagaon panchayat samiti of Yavatmal district in Maharashtra just five years ago. "Today," says Sanjay Bhagat, "there are over 50. And that's to cater to just 7,000 people." Bhagat is a Director of the local Agriculture Produce Market Committee. He is also a long-time journalist of the region. "Right now, the pressure on people to buy is awful. You can sell them anything."

The coming of the rains set off a desperate scramble for inputs over the weekend. "In Yavatmal district as a whole," says B.M. Orke, "there are about 1,200 krishi kendras. You might say the total has doubled over a ten-year period." Orke is the district superintending agricultural officer.

To monitor this vast, chaotic network of shops, there is just one full-time quality control inspector. "You can sell seed anywhere," says K.R. Zanzad. "Seed has no boundaries." Quite true. Many brands have sprouted legs and raced across the Andhra Pradesh border. After a crackdown on them in that State, shady sellers have shifted large stocks of fake inputs into Vidharbha. 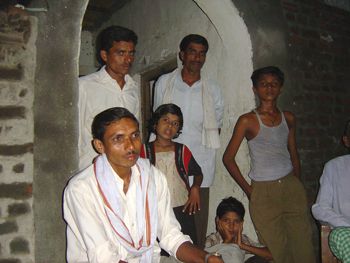 Uncertain future: Lakhs of farmers face losses even before the season gets under way. The family of Laxman Wankhede who committed suicide in Ijani village of Yavatmal last October. [Picture by P Sainath]

Some of the very brands reported by this newspaper as ripping people off in Andhra Pradesh have found their way here. Our reports (The seeds of suicide: July 20 and 21, 2004) showed packets of seed with the words "Germination Rate - 65 per cent" printed on them. The same packets can be found here with a change. The words 65 per cent have been blacked out. Beside them is a new figure - 75 per cent. The contents may not have changed, but the numbers on the packet have. Some packets give no rate at all.

"We have noticed that," says Zanzad. "We have demanded lab reports and statements to see how this was done. If we find something wrong, we will file cases against them." However, by the time that happens, the purchase of inputs would long be over.

Farmers face problems with both real and fake seed dealers. The bogus ones flood the market. The others charge absurd rates. Some BT varieties come with a 70 per cent royalty tagged on to them. And all prices have shot up in the past decade. Sometimes, the high price of seed pushes farmers towards less costly brands which might be fakes.

"The headache with spurious seed is that you figure it out only a month or two after sowing," says Sanjay Bhagat. The racket has reached worrying proportions. "We have lodged FIRs in some cases," says District Collector Harshdeep Kamble. "We find now that they are not stocking these in the shops." Bhagat confirms that in Mahagaon. "The action is now away from the shop." Though that's where the dealers trawl for clients. Large sellers feed the smaller shops. "The sub-dealers have no idea where the big ones get their stocks from," says Bhagat. The number of brands, names and claims is bewildering. Since both real and fake stuff are on offer, chaos rules. For those deep in debt and wrecked by crop loss, fake inputs are a nightmare. "Nothing is regulated anymore There is no control in the seed market," farmers in Waifad, Wardha told us at a meeting. In an era when input prices have soared, fake items introduce a risk that can be fatal.

Namdeo Patil Bonde in Yavatmal suffered three crop failures before he took his own life last November. "The input costs crushed him," says his brother Pandurang. And don't go by the bills. "As prices go up, the bills go out. The bill for the BT seeds says Rs. 1,800. What he paid was Rs. 2,200." He scoffs at all germination rate claims. "In my experience, most do not exceed 50-60 per cent."

The profusion of shops does not make inputs cheaper. "The government pays less for cotton," says Manoj Chandurvarkar in Waifad. "But, seed prices keep going up. As do those of all other items." In 1991, he points out, "seed for an acre cost me Rs. 70-75. Now it costs Rs. 1,000. If we use BT seeds, that cost is Rs. 3,200 or more." Farmers also scoff at the government raids. "They're doing that more for Monsanto than for us. Where are the raids on the non-BT fakes?" The four raids in Yavatmal have all been on dealers in illegal BT cotton.

Meanwhile, sellers have made a killing. It makes sense to open an inputs store here. The rule now is that a person with a diploma in agriculture can open one. "Earlier, anybody could," says B.M. Orke. "A law was brought in to ensure only graduates in that field could. But that has been challenged in court." "Earlier," he says, "90 per cent of the farmers used domestic seeds. That had no cost at all. Now the demand for commercial seed has shot up." Yet, it isn't just seed costs that are up. "Pesticides have seen the largest hikes," say the farmers in Waifad. "We once spent as little as Rs.90 an acre. Now it ranges from Rs. 1,000 to Rs.3,000." Fertilizer prices have risen three-fold in the past 10 years. The few who have pumpsets paid a lot more for power. From Rs. 900 a year for a 3-HP set, that rose to Rs. 4,500. Transport and labour costs are up. Loans carry much higher interest rates.

Lakhs of farmers face heavy losses. For those shifting from food to cash crops over the past decade, the new costs are crippling. For Shankar Wankhede it all proved too much last week. He took his own life in Mahagaon tehsil on June 20. Fake seeds today add a deadly new element to the process. In Vidharbha, the old Biblical saying stands re-written. Now, for farmers here, it is: as you sow, so shall you weep.

URL for this article
http://indiatogether.org/sowweep-op-ed