EDUCATING STREET CHILDREN
Unwilling learners pose special problems
The challenge of educating street and railway children is more than an education problem - it is a holistic problem of moulding and supporting their entire lives. Aparna Pallavi reports on the efforts of CNI-SSI in Nagpur.
04 February 2008 -

Fourteen-year-old Baba Shafiq wanted to go back to school, which he had left in Class III, along with his home. But how could he, constantly traveling between Nagpur, Bhopal and Mumbai, getting into any train that came his way, sweeping or peddling small items to earn a living? So Baba made some changes. He saved some money and started selling balloons at Nagpur's VCA cricket ground in the evenings, so as to earn a living and still be able to go to school in the day time.

But only six months after the field workers of the CNI-SSI (Churches of North India, Social Service Institute), Nagpur Diocese had admitted Baba to school, he had dropped out again. Now he intermittently sells balloons, works in a garage where he is quite an expert worker, and travels in trains sometimes, when it suits him. It is not easy to talk to Baba, or the several other children living in CNI-SSI's night shelter in Sadar, Nagpur, who are second-time drop-outs. Baba for instance, lapses into stubborn silence after the one brief sentence, "Accha nahin lagta tha" (I did not like it there).

According to Pastor Paramjyoti, who has been looking after CNI-SSI's project for street children and child labourers for four years now, street children, despite the variety of their social backgrounds, constitute a unique marginalized group in themselves, economically, socially and educationally. "It is not only that these children do not figure in policy in any significant manner, the magnitude of the problem too is downplayed heavily by the government," says he. 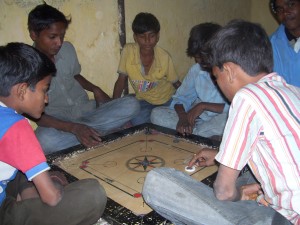 According to a survey conducted by his organisation four years ago, there are around 80,000 to one lakh street children in Nagpur city alone, which is about five times the official numbers. Some of these children live with families in slums or on the streets, but a bulk of the population is made up of runaways from diverse economic backgrounds, who do not want to go back home. The percentage of children working in trains is difficult to estimate because most of them do not stay in one place but keep traveling, though by Paranjyoti's estimates, around one tenth of these children are likely to be working in railway stations and trains.

At present, CNI-SSI centre houses a moving population of around 40 boys in the age-group of eight to twenty. The boys, according to CNI staffer Raj, are pretty regular in spending their nights at the shelter. Says he, "They like to come to the shelter because here they are protected from the violence that happens to children in railway stations, bus stands and market places. Even the children who travel with trains attend this shelter without fail when they are in Nagpur for the night."

A broken link to education

But education, agree Paramjyoti and Raj, is a different matter. Out of some 60 boys who had stayed in the shelter at one time or the other during the last two years, just about 10 were keen to get education. CNI-SSI had got all ten admitted to school, but eight of them dropped out within a year.

"Street children," says Paramjyoti, "are mostly not keen to get an education, especially if they are good earners. Apart from being used to their independence, these children often develop addictions, the most common being chemicals like whitener, thinner and puncture solution, which they consume or sniff to get a high. They also like to buy expensive and stylish things like T-shirts, jackets, jewellery etc, for which they prefer to keep working rather than lose income by going to school."

At the centre, the children are at first hesitant to talk about education and family, preferring to boast about less sensitive things in their lives. Prasad, a highly talented boy of around 12, shows off his bicycle, which he has himself constructed out of old parts bought from scrap dealers and painted to glossy newness. He is also diligent. He has savings of Rs. 1050 in a bank account opened with 'Raj Sir's' help. Chotu Arfaz earns around Rs.200 a day - more than other children in the shelter - selling balloons. Nilesh Chavan never misses a shot at a game of carrom, which he is engrossed in now. Anand has a very snazzy bracelet with a pendant of a skull that, others inform, he is very proud of and would not let anyone touch.

The arrival of Amol Gawai, one of CNI-SSI's two success stories in schooling, breaks the ice. Fourteen-year-old Amol is more than willing to talk about education. "I had dropped out of school in Class V four years ago," he says, "At that time I could not understand what I was being taught. Now when I go to school in Class V, I understand. Now I am enjoying studies." Amol sells balloons in the evening while attending school in the morning. "For four years I worked in trains, traveling all the time. Now I am settled for good."

"Given such an array of different problems," says Paramjyoti, "it is impossible to devise a one-size-fits-all education regime for such children.

•  A pot-holed path to learning
•  Rehabilitating the children

Amol's experiences start off a discussion about school. Yogesh Pandhare, around 14 himself, had left school in Class VI because he did not 'like' it, and also because he needed money (his family is in Nagpur). But he does not want to give it a second chance, "I can't understand what is being taught," he says, "Teachers scold and punish if you don't do homework. I am better off working."

Fifteen-year-old Dharam, who also dropped out of school after CNI-SSI admitted him, says, "It is shameful to sit among little boys and girls in Class I. I would be willing enough to go if they would admit me in Class V or VI at least." Dharam, who has never been to school earlier and has no memories of his family, is now back on the trains full time, touching Nagpur and this shelter off and on in his journeys.

Chotu Arfaz, who has been through the tragic circumstance of having been cast into the streets along with his father by a violent mother, says, "I have lost faith in family, home, everything. I have lost faith in school too. I just want to earn enough for me and my father." Prasad, who has escaped both a drunken father and a remand home in Bhopal to be free on the streets of Nagpur, expresses similar sentiments.

Anand, 20, who used to work in trains but has now settled down at the Nagpur railway station, selling re-filled bottles of drinking water, says, quite frankly "I have worked in trains as far back as I can remember. I have no family, and no desire to learn anything at all. I will save some money and start a kiosk near the station. Zindagi kat jayegi (Life will pass)." His large angelic eyes rule out any possibility of callousness.

"Given such an array of different problems," says Paramjyoti, "it is impossible to devise a one-size-fits-all education regime for such children. An incredible amount of intensive personalized work has to be done with every single child to heal the child's many hurts, restore his faith in education and then help him in a way in which he needs to be helped. It is near-impossible for any organisation to have infrastructure to back up such massive work."

CNI-SSI, nevertheless, has started alternative education classes at the shelter in the evenings, and also at eight contact points in the city - one of them at the railway station, which at present involve only the three R's. But only some boys have responded to this gesture, while others remain aloof. Still, Paramjyoti believes that whatever hope is there for these children lies in alternative education.

But here too attendance is abysmal. At least 80 or so children work in and around the Nagpur railway station on a permanent basis, apart from the roving population that spends nights or days at the station off and on. The centre has contacted only 18 of these children so far (again all boys) since its inception, but even from this smaller number, only about five attend the centre with any semblance of regularity, according to figures provided by Sanjay Talmale, alternative education coordinator of the department.

"Many children," says Talmale, "have been captured and taken by the police to remand homes. Hence children are afraid to come to the centre for fear of the police."

But going by Paramjyoti's experience, this explanation, while not completely invalid, might still be too simplistic. "Having reached a semblance of economic independence at a fearfully young age," he thinks, "a lot of street children sincerely believe that they do not need any education as they can look after themselves without it. The outreach work has to focus on this attitude problem, perhaps even more than the actual process of imparting education."

Another problem that both CNI-SSI and the government centre are facing is in drawing female street children into the education network. CNI-SSI has not so far been successful in starting a night shelter for girls because of the lack of required staff and security problems, though it does have plans. Two girls had come to the education department's centre for one day, according to Talmale, but they never came back. "We do not know what happened to them, or who they were," he says.

Girls do come, however, to CNI-SSI's contact points in the city. Says Raj, "Girls are more interested in studies than boys, who tend to be brash. At our alternative education sessions they show interest." But most girls who work in the streets live with families, and this reduces their freedom. For instance, Sharna, a girl of about 10 who begs near Panchasheel Square, has to take back Rs.30 home every evening, or get a beating. She drops in at CNI's contact point briefly once in a while, as she has no time to spend at the centre.

The number of girls working in trains is also quite high, especially as peddlers and performers, but most of these girls work in family groups with adult supervision. Hence getting off for a few hours in Nagpur to attend a class is just about impossible. The fear of possible sexual harassment and abduction also haunts the parents. Radhabai, who works in trains on the Nagpur-Jabalpur route selling wooden implements and toys along with her two teenage daughters, says, "Once my older daughter was taken to a 'hostel' in Amravati (remand home) by some policemen. I had to pay Rs 3,000 to free her. Now I don't let my daughters out of my sight for a single moment."

Finally, says Paramjyoti, the challenge of educating street and railway children is more than an education problem - it is a holistic problem of moulding and supporting their entire lives. "What we need is dedicated mediators who can patiently, over time, involve with parents, children and alternative education centres, identifying and consolidating groups with identical problems and timings, and arriving at flexible and individually tailored regimes that work for everyone." He feels that government agencies should network with NGOs and voluntary organizations working with such children for this purpose. "We should always remember that we are out to educate a group that mostly does not want education, and tailor our work accordingly."

URL for this article
http://indiatogether.org/stkids-education