CHILD LABOUR
Small hands, hard labour in Surat's textile industry
The famed textile industry of Surat is one of the pillars of Gujarat's industrial success story. What is less known about it is the unfortunate reality of rampant child employment and exploitation that prevails there. Shirish Khare reports.
17 December 2013 -

It is truth, but only a half-truth, that Surat is the backbone of the Indian textile industry. The complete truth is that this 'industry' in the city employs several thousand children, who contribute towards making Surat such a reputed hub of textiles in the country. More than one-fourth are from Gujarat itself. According to government figures, there are 5000 child labourers in Surat. But statistics from civil society estimates are closer to the 50,000 mark. Of these 68 per cent are between the ages of 15 and 18, meaning that nearly a third of them are younger than 15.

The National Child Labour Project also accepts that child labour is significant in the areas of Surat, Bhavnagar and Banasaktha. In these districts 28.51 per cent of the total labour force is comprised of children. The state government had earlier committed to a goal of making the state free of child labour by 2010, but these revelations show how far that goal is.

Power looms thrive, so does exploitation

The khat-khat sound of machines that emanates from Surat's South-East Zone is not out of nowhere. The Census reveals that there are over 4.5 lakh power looms in this area. In 1951 there were only 2282. Even in 1970, there were only 19,025. Between 1980 and 1990, the number of looms increased to 2 lakh, and over the past decade that number has more than doubled.

Many girls are employed in the textile market sector. They get paid 50 paise for sewing in shiny stones and cutting the threads on a sari. When four or five girls get together and work all day, they manage to scrape together something between Rs 10 and Rs 12 each day.

Interestingly, between 1978 and the 1990s, five large textile mills in this area were shut down and their space was taken up by several power looms. In the large mills, the labour unions were strong, and there was no difficulty in mobilising the labour force to pressurise mill owners for workers' rights. But the shutting of the mills broke the back of these unions.

There are 160 unions in Surat even today, but they exist only in name. The power loom factories scattered over the area have undermined workers' rights and have also encouraged the exploitation of the labour force. Taking advantage of the absence of mobilised workers, they continue to employ children in large numbers. Each day in Surat, 35,000 to 1 lakh saris are made, guaranteeing a daily turnover to the tune of 5 crore. Several thousand frail, thin, small hands are behind these saris.

Child labour in the textile industry exists predominantly in three sectors. First among these is the power loom factory where the raw cloth is prepared. This is prevalent largely in the areas of Katargam, Limbayat, Pandeysaray, Udna, Falsabadi, Mufatnagar. The children here put oil in the machines as required and also act as helpers of the machine operators.

In the power looms at Katargam, it is often noticed that even basic amenities such as toilets, drinking water, ventilation and fans are missing. As soon as one enters the power loom there is a dull darkness that envelops him, and layers of grease underfoot. Some of the workers outside the factory say that there is an accepted silence around the practice of extracting maximum work for minimum pay and benefits here. 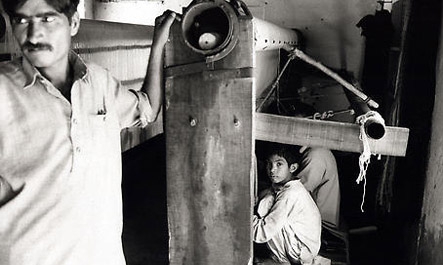 Bans notwithstanding, the use of child labour is rampant.
Photo Courtesy: Shirish Khare.

The second sector is the dyeing factory, where the cloth is coloured. This is considered a hazardous industry because of the harmful chemicals used in the dying process and because the steaming involved can cause burns to the children.

Interestingly the dyeing industry is also the predominant reason for the heavy pollution of the Tapti river that runs through Surat. Along the Tapti in Pandeysaray, over 500 small dyeing units function. The children here lug heavy bundles of dyed cloth in the unit. No new people are allowed in this sector of the industry.

The third hub of employment of child labour is the textile market. In Surat there are over 60,000 shops in the textile market. Cloth is sold from here to all parts of the world. The children pack saris, bundle the thread, carry bundles in the market. The most number of children are found in these markets, because they get paid anywhere between Rs 50 to Rs 80 a day. At the power loom factories, they get a measly Rs 20-25. In this sector, skilled workers are a requirement, so the children are reduced to mere helpers.

The textile market runs along the Ring Road and children who work here live in the areas over the 2-5 kilometre stretch from this road - in Limbayat, Meethee Khadi, Sangam Tekri, Mafat Nagarand Ambedkar Nagar. Workers walk part of the way and travel by shared rickshaws for the remaining. They work from 9 in the morning to 10 at night. The Rajasthani Marwadis are the predominant loom owners in this area, and they also employ children on contract from poor Rajasthani families in rural areas. These children don't live in bastis but accommodate themselves in the area around the power loom, sleeping and eating on footpaths.

Many girls are employed in the textile market sector. They get paid 50 paise for sewing in shiny stones and cutting the threads on a sari. When four or five girls get together and work all day, they manage to scrape together something between Rs 10 and Rs 12 each day. Most of the girls involved in this work are from the Harpati caste.

In Limbayat and Meethi Khadi, several Muslim children from Bihar and Uttar Pradesh do zari work on saris. These children have come here via Mumbai's Govandi suburb. When the labour commissioner in Mumbai gets active, the children are brought to Surat and put to work here. For the zari embroidery, 5-6 children, often predominantly girls, are seated around a khatiya. In a hall, there will be around 5 khatiyas, and thus you will find 25 children labouring for 8 to 10 hours a day in the dim light, doing fine zari work on saris. Since they work and sleep in the same place, there is no difference for them between day and night, work and home.

Many factory owners don't register their business. This means that they not only save on tax, but also get away without giving workers any benefits or guaranteeing satisfactory conditions of work. As a result it is difficult to get an accurate estimate of the number of factories and the number or workers involved in this industry. The situation is so bad that even if a worker is injured at work, there is little or no chance that any compensation will be given to him. The machinery is often old and workers frequently operate four to six machines simultaneously.

The workers are now demanding a payment of Rs 1.25 per metre of cloth, the current rate being Re 1 a metre. Even adult workers don't have a guaranteed wage, but instead get paid not on a monthly basis, but on piece rate as well. The situation of children is substantially worse.

The Surat textile industry is glowingly referred to as the backbone of Gujarat or the lambi minar. Those who gaze up at this lambi minar with awe in their eyes, fail to observe the unshakeable foundation, under whose pressure countless childhoods have been ruthlessly buried. School, aspiration, dream, hope ... all smothered under the weight of the clothing that the industry churns out.

URL for this article
http://indiatogether.org/surat-human-rights