PLAN MUMBAI
Pie in the planning sky
In a city of vast homelessness, can economic growth in the services sector alone lift millions out of poverty? Mumbai's new vision of the future pitches for reclamation and densification, but not jobs and livelihoods. Darryl D'Monte reports.
15 March 2011 -

It is quite appropriate for every major megacity - with a population over 10 million - to develop a vision of what the city will look like in 10, 25 or even 40 or 50 years. Unless one knows the ultimate destination, city authorities will not be able to decide which alternate paths to take. London, Paris and Singapore all have such plans.

And now, so does Mumbai. A 40-year-plan for the city prepared by a team of Singapore consultants known as Surbana, was unveiled at the State Guest House under the auspices of Mumbai First, a corporate think tank, on 4 March. Many of the dimensions of this plan are relevant to the other metros in this country as well.

As with the previous plan by McKinsey on making Mumbai a "world class city" a few years ago, this one too takes a techno-managerial view of the metropolis. Mumbai is a seething, teeming city, with a highly diverse and largely poor population, living in abysmal conditions. It is also anticipated that the ongoing Census will show that the proportion of slum dwellers has risen from 55 to 60 per cent over the last decade, which only confirms Mumbai as the world's leader in accommodating homeless people (as many as 9 million). Surbana's plan, although it projects a slum-less city in 2052, does not incorporate the views of "wretched of the city" in its vision.

It is worth noting what happened to McKinsey's report, also promoted by Mumbai First. It died an unnatural death for lack of anyone to adopt it. Incongruously, it was described as an "executive summary", but when people asked for the main report, they found there wasn't anything more substantial (possibly because McKinsey did the work pro bono).

The report spoke glowingly of how former Andhra Pradesh Chief Minister Chandrababu Naidu had transformed Hyderabad from a sleepy regional town into Cyberabad and how S M Krishna had similarly metamorphosed Bangalore. The irony was that only a few months after McKinsey presented its report, both Naidu and Krishna were unceremoniously booted out of power. Their failure: to pay sufficient heed to the travails of the countryside, where the bulk of the population lives.

Surbana, which has been engaged on a more professional basis and has scoured the city for several months, looked at seven aspects: Mumbai as a global finance centre, balancing urban growth, providing jobs for all citizens, housing, transport, environment and, not least, the city's identity. It correctly looked at the entire Mumbai Metropolitan Region (MMR), spanning some 4355 sq km and itself comprising other one-million-plus cities like Thane and Kalyan. By comparison, the peninsula of Greater Mumbai is only some 460 sq km.

The consultants project the population of the MMR at 44 million by 2052, which would make it if not the biggest, one of the biggest, urban agglomerations in the entire world. What happens to Mumbai in the next half century - 2050, incidentally, is the deadline for all countries to take on steep emission cuts to keep global warming at bay - will have repercussions for urban growth everywhere.

For all the talk of Mumbai as India's richest city, the commercial capital and erstwhile industrial capital, the figures are somewhat sobering. According to Djoko Prohanto of Surbana, the per capita come of Mumbaikars is now under $1000 a year, which is about the same as the nation's. By 2052, however, Surbana estimates that it will touch $23,000. Its competitive edge, it is claimed, is that three-quarters of the employment is in the services sector.

Nasser Munjee, who is associated with Bombay First, referred to a survey of Mumbai's CEOs regarding the city's competitiveness eight years ago. As many as 82 companies were downsizing. The reasons given were the cost of doing business, the labour market and lack of social infrastructure. Mumbai's loss would be Bangalore's and Hyderabad's gain, possibly with Gurgaon's and Noida's too.

The two main objections to Surbana's plan, however, are its emphasis on reclamation and densification. This former has already received a thumbs-down from Chief Minister Prithviraj Chauhan and Surbana hastily referred to this dimension as only one of the options. Although speakers referred at the launch to "locked up lands" like salt pans and the like, these can only be reclaimed at grave risk to the entire ecology of the city. They serve as natural sponges for the tides and excess rainfall like the deluge that occurred in July 2005. City authorities, on the other hand, are looking to the recent relaxation of the Coastal Regulation Zone (CRZ) laws as opening up "tremendous possibilities" for redevelopment. 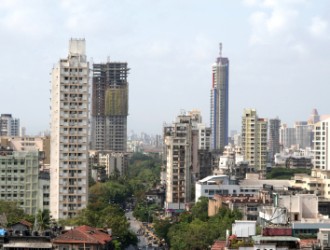 The consultants project the population of the MMR at 44 million by 2052, which would make it if not the biggest, one of the biggest, urban agglomerations in the entire world.

The main reclamation that Surbana proposes is in the Thane creek, which serves as Greater Mumbai's easternmost boundary and is, over the years, being silted up. The first project, involving 948 hectares, is a "Creative and Innovative District", bang in the middle of the creek. The second and smaller one is a "Waterfront Entertainment Hub", over 285 hectares.

The creek, according to ecologists present at the launch, is dying due to deposits and is being dredged to keep it alive. It harbours a few thousand sq km of mangroves and has seen the annual visitation of scores of flamingoes, though the numbers are declining due to the overload of untreated sewage dumped into it. The creek cannot be treated as an inert body of water which can be subjected to such large-scale reclamation without irretrievably damaging the city's natural ecosystems. The mangroves serve as a flushing mechanism to absorb all the heavy metals and other pollutants being deposited in the creek.

One other zany proposal by Surbana is to make the Mahim bay a fresh water reservoir - no doubt inspired by Singapore's highly efficient reservoir along the bay where sewage water is refined to a potable level. However, Singapore and Mumbai are two different cities: the former has no water whatsoever and imports all its needs from Malaysia.

In Mumbai, even environmentalists were surprised to discover after the 2005 cloudburst that the two lakes in the 110-sq-km Sanjay Gandhi National Park overflow into the Powai lake. From there, it flows into the Mithi river, which overflowed its banks in 2005, causing mayhem in its wake. The Mithi empties into the Mahim bay, so one cannot block its exit without causing terminal "thrombosis" in Mumbai's natural water arteries.

As for densification, which several speakers advocated, citing New York and the like, the consultants envisage a new central business district reclaimed over 770 hectares next to Nariman Point with a floor-space index (the buildable area in relation to the plot) of 14-20, as opposed to around 3 now. While Nariman Point has an average of 20-25 storeys today, the densification plan will give rise to high-rise clusters of 60-80 storeys. Surbana explained that this would be possible by bridging this area at the southernmost tip of the city to Pen, several kilometres away on the mainland.

However, this still reinforces the north-south traffic axis, since Nariman Point is at the southern end of the city, while planners from the 1940s onwards have recommended that Mumbai change its axis to west-east, thereby extending itself to the mainland. Reestablishing Mumbai as "a city of islands" - it originally consisted of seven fishing islands - sounds all very well in concept, but will the transport links (hopefully, with the emphasis on public transport) ferry people to and from these new centres speedily and cheaply enough?

The overall deficiency of the vision plan is that it sets targets without specifying how the city will get there. It correctly wants to switch from the present pattern of housing, where 90 per cent is provided by the private sector, at prices well beyond the reach of most. This is supposed to stabilize at 77 per cent by 2052 but it does not explain how the state-owned Maharashtra Housing and Area Development Authority (MHADA), which has virtually stopped building houses for the poor, is going to have a change of heart and mind.

The plan also rightly recommends an increase in rental housing, which many more can afford. Similarly, the average living space enjoyed - if that is the appropriate word - by a Mumbaikar is 4-6 sq m will rise to 20-25 sq m - but with 60 per cent living in slums how, the roadmap for the switch to pukka housing is by no means clear.

One of the weakest links in the plan is the generation of jobs. Mumbai has long ceased to be a manufacturing hub, with cotton mills and even engineering and chemical industries downing their shutters. If the plan hopes to replace these with service industries, including in the financial sector, that is an impossible dream. A moment's reflection will reveal that these jobs are getting more and more computerised, with a decline in number of employees per unit, even if the overall number of workers in this sector is increasing. The services sector cannot possibly absorb all those who were employed in mass-scale manufacturing and secondary and tertiary industries and occupations associated with it.

As things are, around 80 per cent of Mumbaikars are in the so-called informal sector, or casual employment. Without a clear vision on how Mumbai - and other big cities in the country - will employ the majority of its citizens, most will continue to fester in slums.

More vital than all this is what is not proposed, despite being badly needed - a better structure for governance in the region, and more participation by the citizens of the city. This is not Surbana's fault - it is not the mandate of consultants to proposes changes on governance fronts. But we the residents have to be alert to this void. There is plenty of evidence from recent research that vibrant cities are the result of strong leadership, and also high levels of citizen involvement in planning and policy. India's politics remains devoid of this truth, and inevitably, India's reality reflects this absence.

URL for this article
http://indiatogether.org/surbana-government