Every day is a struggle for Mumtaz Sheikh, a tamasha artist from Parbhani in Maharashtra. It has been like this for the last 20 years that she has been a dancer. Tamasha was once a rich folk form that thrived in Maharashtra, but is dying now due to lack of patronage. "It is tough today to survive as a dancer and make ends meet. We love the work we do, but there is no respect for our profession anymore. People look down on us," she says despondently. Many dancers and musicians in her troupe performing at Ahmednagar echo the same thoughts, fear and pessimism.

Bollywood and reality shows have somehow kept tamasha alive only because of its volatile sex appeal. Live performances in small towns of Maharashtra today attract catcalls and vulgar statements, as dancers gyrate to loud music moving around uninhibitedly with suggestive gestures that onlookers today want and demand. The old classical form that was a part of rich tradition is no more there.

Derived from a Persian word that means "fun", tamasha has been known as a satirical rural theatre form since the 16th Century in Maharashtra. Some scholars say that its orgins are in Sanskrit drama, the Prahsana and the Bhana. But others say it was created to entertain Mughal troops. Traditionally, the performance had both males and females. While men managed the musical instruments, the women danced and sang.

Lavanis were the heart of tamasha, and were largely emotional songs when they emerged in the period of the Peshwas roughly between 1700 and 1800 AD. But today, they have largely degenerated, with many troupes resorting to vulgar lyrics to pander to the lowest denominator of public taste. The dancers are constantly under pressure from the public, which wants raunchy Bollywood numbers. Earlier, the middle class formed part of the audience; now it is mostly drunk men who look at lavani as a cheap form of entertainment. Obviously, they have little respect for the dancers, having no idea of the rich traditional lineage that once marked lavani. 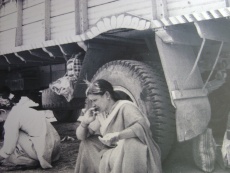 For most dancers, the prospects are bleak, and they don't want their children to continue in their footsteps. (Photo by Sandesh Bhandare)

This bitter reality is not lost on Sangeeta Andhare, in her late thirties, from Nasik. She got into the profession of dancing as her mother was a dancer too. She has now pulled out her only daughter from school, wanting her to dance and support the family. She says she cannot do it alone any longer, as earnings have dropped considerably.

Dancers earn as little as Rs.5000 a month from a troupe that is on the move for around eight to nine months in a year. They have unhealthy food habits, do not have access to good health care and even suffer from chronic illnesses. Some have sexually transmitted diseases. Many dancers turned to the flesh trade unwillingly, as they just could not make ends meet. Even if they were not into it, they were seen to be sex workers as they danced to erotic songs. Sangita, who now sings and dances in a group of seven artists, is also a peer educator as she goes around educating the dancers about health and precautions to avoid sexually transmitted diseases.

Khandge says: "Lavani is now coming into Marathi and Hindi films, but with a commercial touch. Due to reality shows on television, interest in lavani is still around, though the form itself is changing. Today, most of the lavanis heavily rely on Bollywood songs. One positive way to look at the phenomenon is that they are innovating to move with the times, as tastes have changed." 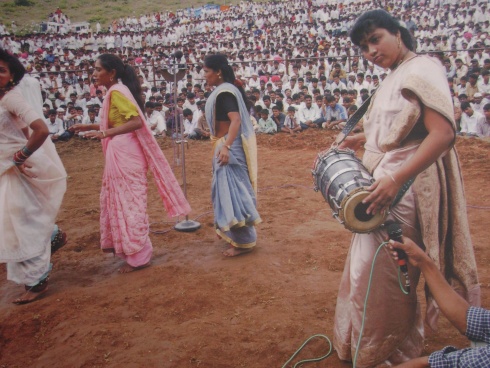 A tamasha performance in Maharashtra.
Photo by Sandesh Bhandare.

Respecting tradition, most of the dancers do not marry. Some social workers suspect that it was deliberately created this way, so that the upper castes could take sexual advantage of dancers whenever they wanted. Arun Jadhav, a social worker in Ahmednagar, says that this tradition of not marrying has to be broken. Says a dancer who does not want to be identified, "Once we tie ghungroos on our feet, we cannot get married. When we have children, schools demand to know the name of the father. When we refuse to divulge that, they tell us that our child cannot be admitted. We follow this tradition that society set for us. In the bargain, we are punished for it, and suffer all our lives. What is the use of such a tradition?"

It is therefore not surprising that most tamasha artists do not want their children to follow in their footsteps. They dream of a better and more respectable future for their children. They have struggled for decades trying to keep the tradition alive, but have lived in penury. Points out activist Rajshree Kale: "Unless they tie ghungroos on their feet and dance, their family will have to go hungry. Most of the dancers cannot afford to fall sick as the kitchen fires will not burn the next day."

What kept them going all these years was the sense of preserving an old tradition, and performing to entertain people all over Maharashtra. But neither they nor their children see it as a vocation worth pursuing anymore. Prof. Milind Kasbe from Narayangoan, which has numerous tamasha troupes, has extensively researched the tradition. He says that as the real form is dying, the artists will now educate their young so that they could take up other vocations that are respectable, and also bring in some money.

Ajay Ambekar, Former Director, Cultural Affairs, Maharashtra, says that the government is aware that tamasha is dying, and is trying to revive it by giving grants to troupes and even impart training in Mumbai for newcomers who are interested in the dance form. But providing Rs.500 per month to those who are above 55 cannot help attract young talent. Jadhav says that the dancers would rather educate their children to do better things. The unique sounds of their tradition will then end forever.

URL for this article
http://indiatogether.org/tamasha-society