DAMS AND ECOLOGY
Damming and damning the Teesta
In North Sikkim, a familiar tale of subverting environment regulation is playing out, as plans to dam the Teesta river push past local opposition and ecological considerations. Kanchi Kohli reports.
22 June 2010 -

The minutes of a meeting of the Expert Appraisal Committee (EAC) on River Valley and Hydroelectric Projects, held in January this year, include the following lines: The work of determining the "... carrying capacity of the Teesta basin with respect to hydropower development was entrusted by MoEF to the Center for Inter-Disciplinary Studies of Mountain & Hill Environment (CISMHE) in 2001, and completed in 2007. Based on the study, MoEF in October 2008 advised the Sikkim Government not go to ahead with the construction of dams and large scale development activities in the area above Chungthang due to ecological and geological sensitivity. This has affected the development of five hydropower projects in the state ... The Sikkim Government has requested for reconsideration of the decision and sought to present their interpretation of the study before the EAC."

This is a giveaway to the tale that I am to narrate. But to know and understand the future implications of what the EAC has finally decided, one needs to step back a bit. At least about 12 years or so.

The river Teesta that flows through Sikkim and north Bengal, is not just the lifeline of the state of Sikkim. It has interconnected within its rapids cultures, livelihoods, and deep spiritual connections. From Bengal the river traverses into Bangladesh where it finally joins the Brahmaputra as a tributary. Like many other Himalayan rivers in India, the Teesta presents a lucrative opportunity for power developers and dam engineers. The fast flowing river and its gorges suggest ample scope for several run-of-the-river energy projects in the river basin. Naturally, there has been no shortage of businesses wanting to exploit this.

Plans for the Teesta

In 1998, the expert committee on River Valley and Hydroelectric Projects was in the process of granting approval to the 510 MW Teesta V Hydro project. The matter had landed before the committee because such approval was required as part of the procedure prescribed under the Environment Impact Assessment Notification, 1994 (since amended in 2006). 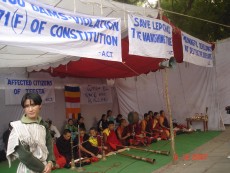 The Government of Sikkim has also come under the scanner of the Comptroller and Auditor General (CAG). The CAG report of 2009 significantly questions the negligent approach in the construction of the Teesta V project. It states that there was "indiscriminate disposal of muck by the developers thereby causing degradation of land, air and water. A Study conducted by Mines, Mineral and Geology Dept revealed gross negligence by the NHPC in disposal of muck generated from the execution of Teesta stage V project" (see this link). Back in 2004-5, Manju Menon and Neeraj Vagholikar, Kalpavriksh along with the local groups in Sikkim had raised similar concerns, but all these had gone unanswered (see here). (Above: An ACT protest in Delhi - Picture by Kanchi Kohli.)

According to an investigation report of 2004 by Manju Menon and Neeraj Vagholikar of Kalpavriksh Environmental Action Group, the Teesta V project was an initiative of the National Hydro Power Corporation (NHPC) and was to be the first of the 6-stage 'cascade' plan to harness a total of 3635 MW of hydropower, all over a 175-km section of the Teesta in Sikkim. The proposed run-of-the-river scheme, involved a concrete gravity dam 96.45 m high and 182.5 m long at Dikchu, which would raise the water level upstream before diverting it through a 17.5 km long 'head race tunnel' (HRT) to the powerhouse at Balutar.

The committee first decided that the Teesta V project could not be granted environment clearance unless and until a comprehensive study to determine the carrying capacity of the river was carried out. The purpose of such a study is to ascertain how much development can take place on the river without serious social, ecological and environmental impacts.

However, the Ministry of Environment and Forests (MoEF) and its EAC did not wait for the study to be completed. According to Tseten Lepcha of Affected Citizens of Teesta (ACT, a leading organisation in Sikkim raising concerns with respect to dams on the Teesta River Basin), "In May 1999, following pressure from the Ministry of Power, the Teesta V project was granted clearance. The clearance came with a clear condition that no other project in Sikkim will be considered for environmental clearance till the study on the river's carrying capacity is completed. However, in violation of this condition the clearance for Teesta Stage III project was granted, and therefore that approval is illegal"

The task of carrying out the afore-mentioned study was given to the New Delhi-based Centre for Inter-Disciplinary Studies of Mountain and Hill Environment (CISMHE), and funded by the project proponent NHPC. CISMHE initiated the study in 2001 and took six years to complete it. But MoEF seemed to be in a hurry, and decided not to wait for the completion of the study. It granted approval to five projects on the Teesta River basin, in violation of the conditions prescribed for the Teesta V project, probably under pressure from other Government of India ministries. As the CISMHE study itself admits, "... after the Hon'ble Prime Minister's 50,000 MW initiative in 2003, a number of schemes have been proposed on the Teesta and its tributaries."

The report was candid in pointing out that the river held great potential for the development of power, but it also raised concerns about the ecological sensitivity of the region.

Around the time the study was completed, several local youth associated with the Affected Citizens of Teesta were sitting on the streets of Gangtok in an unending satyagraha. Representatives of the Lepcha tribal community were on an indefinite hunger strike to save Dzongu, their traditional homeland. It was one of the most inspiring youth-led campaigns of recent times, which received both national and international attention. The Lepcha and their supporters were deeply concerned that the free flow of the Teesta would be arrested, and it would impact their identity greatly. They were worried about their lands being acquired for the project, and also concerned about the influx of outside labour for dam construction, which they believed would lead to cultural erosion.

Their worries were real, especially given the number of projects proposed and their scale. The construction of ten more dams in Sikkim had been approved by the MoEF in violation of the environment clearance conditions of the Teesta V project. According to Neeraj Vagholikar of Kalpavriksh, "the MoEF justified these decisions by saying that they had referred to the interim report/recommendations of the study on carrying capacity while considering the projects for environmental clearance. However, it still amounts to a violation of the Teesta V environment clearance conditions and the MoEF had no answer for that." 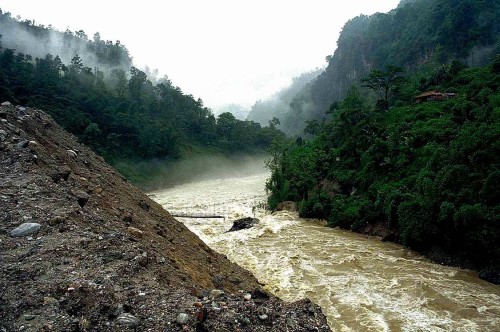 Muck and debris from the Teesta V project being dumped in the river.
(Photo by Manju Menon)

In an interesting twist in October 2008, the MoEF issued a letter to the Government of Sikkim that no activities related to dams (even investigations) should be taken up north of the Chungthang region in North Sikkim, home to the Lepcha and other communities. Whether this was in recognition of the satyagraha was not stated, but it was certainly a critical step forward for the struggling community members. What the MoEF admitted was that its decision was motivated by the CISMHE study, especially on the ecological sensitivity of the Teesta basin in North Sikkim. MoEF asked the state government to scrap five projects - Teesta I (300 MW), Teesta II (480 MW), Bhimkyong (99 MW), Bop (99 MW)and Lachung (99 MW), with a total installed capacity of 1077 MW.

Developer and government press on

The Government of Sikkim was not deterred. At the January 2010 meeting of the EAC, the Power Secretary of the Government of Sikkim was allowed to make a presentation. Also present was a resource person for the Government of Sikkim is P G Sastry - who had himself been the Chairperson of the EAC for River Valley projects as late as the year 2007. In less than 3 years after he shifted roles, Prof. Sastry now argued that the project developers were willing to take on board the concerns raised in the CISHME study and address them, and exploratory work in North Sikkim should therefore be permitted to determine if projects there could be carried out. To quote the minutes, "The presentation centered around the merits and demerits of sitting hydro projects north of Chungthang from environmental consideration".

In February 2010, the EAC gave permission to Teesta I and II projects to conduct investigations, based on revised location and parameters. As the projects were close to the Kanchandzonga National Park, the Government of Sikkim was also asked to take the permission of the National Board of Wildlife (NBWL). In March 2010, members of the EAC visited Sikkim and were hosted by the government - and as local activists allege, by the project authorities themselves. April 2010, the remaining three projects in North Sikkim were also allowed to carry out investigations. These were the Lachung, Bhimkyong and Bop hydroelectric projects.

In the judgment of the group that visited the sites of the above projects, the sites at Bop and Bhimkyong, do not have any rehabilitation issues and the 10-km stretch of the tunnelled river is intercepted by several perennial streams. Further, "using modern technology the impact of tunneling on land slide prone areas may be reduced." These and other technical considerations noted in the minutes of the April 2010 meeting allowed the project authorities to invade into the ecological fragile North Sikkim. Recommendations from MoEF's own processes, as well as large scale protests by affected people were just brushed aside.

And so once again, a familiar story is playing out. Hydropower corporations, supported by the processes and persons of government, are left free to exploit the resources of a region, with little regard to the wishes of the local people or even normal considerations of common sense in the management of an eco-system.

URL for this article
http://indiatogether.org/teesta-environment