TERROR INVESTIGATIONS
Shall we imprison everyone?
Security hawks are expanding the list of terror suspects to include not just the illiterate poor, but also the well-to-do educated Muslims. Who does that leave out, asks Firdaus Ahmed.
11 September 2011 -

A recent op-ed in the Times of India, "No More Chasing Shadows" (9 September), has the head of 'a group on C4ISRT (Command, Control, Communications and Computers Intelligence, Surveillance, Reconnaisance and Targeting) in South Asia' casting the net of prospective terrorists wider, but not wide enough to possibly net the likely suspects.

He considers the public stereotype of the terrorist as a 'desperately poor, illiterate, uneducated, rural-based or ghetto-based, religious fanatic, a single young man in his late teens or early twenties' as inadequate. 'Madrassa students from poor families' are no longer the usual suspects. Instead, he alights on those who 'have no criminal records; are usually highly educated professionals such as engineers, doctors and architects; are usually married men with children; and have never displayed any religious extremism.'

As I read all this I got a feeling he's describing me. He goes on to say, chillingly for me as I read on, that they come from 'upper middle class families and exhibit only moderate religious behaviour.' According to him, I am now half way down to becoming a 'terror activist'. Casting his net to include both the 'poor, illiterate' and the 'rich, educated', he leaves out the non-existent 'poor, educated' and 'rich, uneducated'. Perhaps he'll include them in the dragnet over the next two blasts. Muslim women, Ishrat Jahan notwithstanding, have got away unscathed.

He goes on to enlighten us, 'Most of them joined the SIMI or HuJI only a few weeks earlier, and their families, colleagues, and close friends had detected no indications of their having done so.' To him, 'Even their families and friends would have no inkling of their having been recruited...'. This means that you don't really know if I have joined up or not as yet. You will only know when I commit my first terror act which to him will be the 'first illegal or immoral act which they have ever committed.' Apparently, elsewhere it has taken but 'three weeks' for the likes of me to 'carry out a terror attack to avenge the perceived discrimination.'

Luckily, my employers have not 'discriminated' against me professionally nor have I been 'denied entry in social circles commensurate' with my education. Thankfully, I have no reason to be a terrorist, on this score at least. That is a relief. But, not for long though. 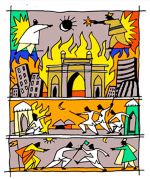 The intelligence agencies can be likened to someone who has lost his car keys in the dark and proceeds to look for them under the light of the lamp post only.

Ravi Visvesvaraya Prasad, the author, has more. Commending the Indian state for the 'brilliant manner in which the Indian government used the Jat Sikhs in the police and armed forces to work on the Jat Sikhs in the Khalistani secessionist organisations', he recommends setting up educated Muslims against Muslim terrorists. What the Sachar and Ranganath Mishra Committees could not do and what Harsh Mander's Center for Equity Studies report has not managed to dent, this honcho from the intelligence community urges of the state: 'It is high time that intelligence agencies and police recruited large numbers of Muslims of various sects in the middle to senior positions, and built bridges ...'

That should get the educated unemployed a job, catching terrorists. And I, having passed the average age of such would be terrorists, could perhaps land one such. The logic apparent is 'set a thief, to catch a thief', or more intellectually, the phrase Delhi has historically been conversant with, 'divide et impera'.

As an educated middle class Muslim, I have often had to hear, 'Stand up and speak out!' I was required to speak out against the usurpation of my religion by fanatics and condemn terrorism. I now choose to follow the advice. I begin by emulating SR 'Epiglottis' Khan, "I am not a terrorist!" I venture further than my brief, "Nor are my co-religionists!" Let me explain why.

By his cryptic designation, Prasad appears to be a denizen of the shadowy, intelligence world. His world view is perhaps widely held in the intelligence community. On that score it needs dissection.

He quotes profusely from the 'Band of Boys' theory of Marc Sageman, 'a forensic psychiatrist who has worked for the CIA in Pakistan and Afghanistan.' He also approvingly points to the UK police's surveillance of congregations in mosques. Clearly, great gains have been made by Mr. Chidambaram's trips overseas in terms of emulating homeland security measures elsewhere, as indeed they must. But how far are the conditions there replicated in India and corresponding counter measures import worthy?

The intelligence agencies can be likened to someone who has lost his car keys in the dark and proceeds to look for them under the light of the lamp post only. While no effort needs to be spared in getting terrorists to book, this is applicable for terrorists of any hue. The problem is in assuming the blasts that have taken place as having the minority's signature. This is true only to an extent. A proportion of blasts can now be irrefutably attributed to majoritarian extremists of the Abhinav Bharat variety. It may be worth investigation if the Abhinav Bharat is merely the tip of the iceberg, with its underwater mass perhaps stretching into the state and its intelligence agencies.

There are several blasts yet unexplained. These include the horrendous ones in metropolitan cities of 2008. The holes in the Batla House encounter story do not lend confidence to close these cases currently attributed to Aqil and his Azamgarh cohort, now largely eliminated. The pre CWG shooting of Taiwanese tourists, the High Court blast of earlier this year and now the latest, the nineteenth, blast in Delhi, cannot necessarily be ascribed as minority perpetrated violence. In other words, the net needs to be cast wider. Why?

The 2008 blasts were in the run up to national elections. The narrative sought could have been that the UPA was 'soft' on terror because of vote bank concerns. Likewise, this time round, the Supreme Court mandated investigations in the Gujarat carnage case are set to culminate soon. There is disarray in the right wing mainstream. The Anna agitation provided a momentary respite. It is perhaps reckoned that it is time to get back to the main story.

In other words, a crime has been committed, a motive exists. Evidence must then be sought. There is a case for setting the NIA to look for the keys where they are as likely to be found as anywhere else. The government, in not owning up to a strategy, makes Digvijay Singh appear a maverick.

Prasad is right in demanding 'original innovative thinking on part of India's intelligence agencies', but wrong in pointing them towards an 'appreciation of the psychology of urban Indian Muslim professionals.' That he does so stinks of an attempt to put the intelligence agencies off the smell. The purpose, now easier to discern, is to intimidate into silence engaged Muslim voices pointing out that the emperor is without clothes.

With this piece of propaganda occupying prime place in a leading national daily, it can be irrefutably said that the fringe has gone mainstream. At such junctures, Niemoeller's phrase comes readily to mind, 'Then they came for the Jews, and I didn't speak out because I wasn't a Jew. Then they came for me and there was no one left to speak out for me.' They've now passed the secular Muslims, so secular Hindus must be next!

URL for this article
http://indiatogether.org/terror-op-ed