FORESTS AND CONFLICT
Tribals, forest interdependence, and integration
Defining a clear land-use policy, integrating indigenous people along with their skills, encouraging mutual exchange between tribals and the outside world can help make the process of change easier for the indigenous folk. Malini Shankar digs deeper.
19 October 2008 -

India's indigenous peoples' stifled interdependence on forest resources has left them with an identity crisis. Hired by the British for the Empire's labour, the indigenous people were introduced to a monetary economy; after being weaned from barter of forest produce, they were in penury because of seasonal unemployment. Once legislation severed them from their roots, they suffered immeasurable socio-economic, psychological and emotional alienation. Worsening matters were WTO's diktats, globalised, commercial media and accusations of connivance with poachers.

All forest offences have a tribal behind it since they have intimate knowledge of forest layouts. The poaching and smuggling mafia is using hundreds of innocent tribals as a façade, says K M Chinappa, retired ranger of the Nagarhole National Park. 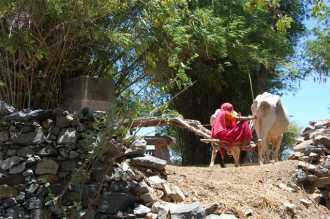 Villagers regard the tiger and the park administration as their common enemy no 1. They live sandwiched between the two, and are bitter about their desperately wretched existence and continued harassment, says the Central Tiger Task Force, appointed to investigate the slaughter of 22 tigers in Sariska in 2004-05.

Conservationists insist that all that the conservation laws achieved remains undone by the legislation of the Forest Rights Act. At the same time, anthropologists point out that the best areas for wildlife to this day are those where indigenous people coexist despite conservation laws and the forest department.

We believe that we need to set aside areas for biodiversity and areas for economic production. The legislation of the Forest Rights Act mitigates man-animal conflict. When they get absolute rights, they will be able to deal with this appropriately. The idea is of inclusion...when you have reasserted your place in the forest then you will take the decisions to make life liveable, accounting for human wildlife conflict, human state conflict, and everything else, says Dr Nitin Rai, Senior Fellow at the Bangalore-based Ashoka Trust for Research in Environment and Ecology.

We have hundreds of thousands of people packed into these forests and its exploitation is for regional local and even global markets - for different products - ranging from tree barks to ivory to tiger bones...this linkage between market use, wildlife and human beings is not sustainable, says Dr Ullas Karanth of Wildlife Conservation Society.

Analysing the tribals' alienation, Dr H Sudarshan of the Vivekananda Girijana Kalyana Kendra (VGKK  a registered organisation working with the Soliga tribes) in Biligiri Rangaswamy Temple (BRT) Wildlife Sanctuary in Karnataka says that Deforestation was caused for supplying the railways sleepers during the Nehruvian era, then coffee estates and granite quarries. It was the forest department that was responsible for clear felling and planting monocultures, he notes. "It was thanks to corrupt elements in forest, police departments and politicians that a monster like Veerappan thrived. The main health hazards of the indigenous people are due to living in the forests itself: snake bites, mauling by bears, TB, pneumonia, anaemia, malnourishment, sickle cell anaemia are very common; some of them have the habit of smoking cannabis and alcohol, says Sudarshan.

The tribals traditional practice of organic farming has conserved rich diversity of seeds.

"They have a multi-cropping pattern which takes care of their cereals, pulses vegetables, etc. Organic farming is devoid of pesticide consumption.

- Dr H Sudarshan of the VGKK in BRT Wildlife Sanctuary in Karnataka.

•  Early gains from Forest Rights Act
•  Ecology for the people

Thanks to a monetary economy, their food habits have changed drastically. Those who hold BPL ration cards are given 20 kg rice, 5 kg wheat and 3 litres of kerosene. Edible oil has been introduced into their diet, which was not there earlier. They go to different places in search of wage labour and eat food available there. They are caught in the process of change, which is often painful. What could be done is to make the process of change smoother and acceptable to the people, says Dr Suresh Patil, Reader at the Southern Regional Centre of the Anthropological Survey of India in Mysore.

No longer can tribals live in isolation. Their living conditions in forests are pathetic; they are not getting good and easy access to forest products for sustenance. It may not be possible to provide them with modern education, health care, electricity, etc., deep inside the forests. That would ruin the health of the ecosystem in the long run, says Dr Syed Ajmal Pasha, Environmental Economist of the Institute of Socio Economic Change/Administrative Training Institute in Mysore.

Intregation is a two-way process

Relocation does not imply integration. Sudarshan says that the so-called civilised society can learn their best practises such as knowledge of traditional medicine, health best practices, non-sedentary habits, and they do not have stress induced disorders like hypertension and diabetes. Urban children could learn their skills for conservation. The traditional diet of the Soligas in the BRT Wildlife Sanctuary in Karnataka is balanced with millet, pulses, and 20 varieties of leafy vegetables available in the forests, besides castor oil for external applications, he notes.

Sudarshan goes further to comment on the politics of seeds. "The tribals traditional practice of organic farming has conserved rich diversity of seeds. The gene pool of seeds is safer in the hands of the tribal community than with multinational gene banks and corporates. They have a multi-cropping pattern which takes care of their cereals, pulses vegetables, etc. Organic farming is devoid of pesticide consumption."

Sudarshan also feels that process need not be one-way. The modern could offer value to indigenous peoples. "On the other hand, tribals could learn computer skills, inter-personal soft skills of the outside world to which they are not exposed. There can be a mutual exchange between the two.

But dealing with the modern world comes with its own challenges. The Kani tribes in Kerala shared a patent with the Tropical Botanical Garden Research Institute by documenting the medicinal properties of arogya paccha (Trichopus zeylanicus) found in the Western Ghats. The Kanis got a 50 per cent share of the patent fees. Lacking the socio-economic infrastructure to deal with the monetary benefit, the patent money was subject to endless disputes. Once the patent license term expired, the Kanis couldn't either renew their patent or negotiate with TBGRI to sustain their loyalty fees. Consequently, the Trust that was formed for the development of the Kanis with the patent fees is languishing and the money they got, expended, leaving them to the mercy of the bottle.

Thanks to Rom Whittaker, Indias most well known snake catcher, the Irulas skills are used to harvest snake venom in the highly successful venom business. Such attempts at integrating them with their skills could go a long way in mainstreaming the indigenous folk. Attempts to integrate them into mainstream society can only be done in a planned, systematic manner. For example, the advantage of defining a clear land-use policy is that indigenous people dependent on non-timber forest produce and other forest products can harvest these in buffer areas of wildlife reserves like the Reserved Forests and let the wildlife remain in protected forests.

URL for this article
http://indiatogether.org/tribals-environment