OWNERSHIP OF MEDIA
Whose news are you watching today?

Television news in the southern part of the country has largely become the preserve of the various political dynasties, with a glut of channels acting as mouthpieces of the owners rather than objective news broadcasters. T S Sudhir brings us the true picture.

A joke in Tamilnadu one has heard several times is about how Tamilians ensure they get the right news. They first hear the news on Sun TV and then on Jaya TV (or the other way round) and the 180 degree different spin to political news on the two channels ensures viewers know both sides of every story. That was till `Puthiya Thalamurai' (new generation) burst on the scene in mid-2011. The Tamil news channel promoted by the SRM group, a 1000-crore-rupees group with interest in education, software and realty business, positioned itself bang in the middle, promising neutral news, minus any political slant.

That `Puthiya Thalamurai' rose to become number one in terms of Television Rating Points (TRPs) within five months in January 2013, was an indication of the hunger for unbiased news. And the channel ensured it wore its independence on its sleeve. Even though its chairman T R Pachamuthu ran his own political party, Indiya Jananayaka Katchi - a much smaller operation compared to the DMK and the AIADMK - he got no coverage at all on his own channel. The decision to do so was deliberate, to look distinctly different from the other media operations that were nothing more than HMVs. Independent editorial heads ensured Puthiya Thalamurai treated every bit of news on merit and nothing else. For viewers used to sycophantic coverage on the other two channels, the new baby on the airwaves has been Tamilnadu's passport to watching a professionally run media enterprise. 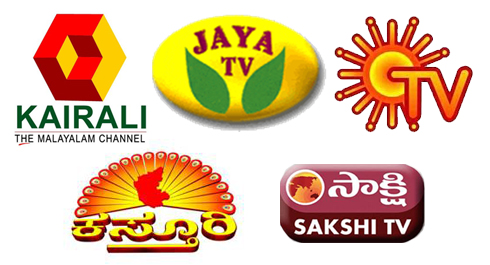 However, Sun TV and Jaya TV aren't the only channels who are more loyal to the king or the queen. A politician in Tamilnadu, it would seem, is not good enough unless he has a TV channel in his bouquet. Vasanthkumar, a Congress politician controls Vasanth TV while K V Thangabalu, former Union minister from the Congress, has Mega TV in his pocket. The PMK of the Ramadoss family owns Makkal TV. And then there is Kalaignar TV that owes allegiance to the DMK first family. In fact in 2007, when the Marans, who own the Sun TV group, had a tiff with Karunanidhi, the first thing the then chief minister did was to float Kalaignar TV. Evidence of the importance modern-day politicians give to a TV channel in politicking.

Cross the Tamilnadu-Andhra Pradesh border and tune into Sakshi TV and you would realise there are no borders when it comes to political ownership of television channels. This is Y S Jaganmohan Reddy's channel, that could almost be mistaken for home video. For the channel devotes significant airtime at the moment to sister Sharmila's padayatra and who visits Jagan at Chanchalguda central prison on a daily basis (an OB van is parked outside the jail almost 24x7 !).

When the late Y S Rajasekhara Reddy was chief minister, he would spare no opportunity to take a dig at `Eenadu' and `Andhra Jyothi', two Telugu dailies with a huge circulation that adopted an anti-Congress and anti-YSR line every morning. `Sakshi' newspaper was born out of the desire to neutralise the criticism in print. The television avatar followed because YSR and Jagan realised the power of pictures and the need to blunt the power of ETV and ABN, channels owned by the same groups and distinctly pro-Chandrababu Naidu in their approach.

Things came to a head, for instance, during the byelection in Kadapa in 2010 when the TDP complained to the Election Commission against Sakshi TV, charging it with peddling paid news. And in a case of the pot calling the kettle black, Jagan's party also complained to the EC about paid news on ETV, ABN, TV9 and Studio N (then owned by Chandrababu Naidu's family). It alleged that these media houses only highlighted the election campaign of the TDP candidates and therefore, the expenditure incurred in broadcasting such news items should be included in the TDP candidates' account of expenditure.

While Sakshi TV's pro-Jagan line is too apparent, other channels have not quite tried to hide their tilts either. V6 is a channel owned by Congressmen G Vivek and G Vinod and pursues a Telangana line. So does T-TV that is owned by the Telangana Rashtra Samiti. Zee 24 Ghantalu was taken over by PCC chief Botsa Satyanarayana, after he realised the negative press he got following allegations of his involvement in the liquor scam in Andhra Pradesh. The channel pursues an anti-Kiran Kumar Reddy line when the two cross swords and at other times, propagates the virtues of its owner.

Chief minister Kiran Kumar Reddy's friends control I-News, another leading news network while 10TV, a newly launched channel is said to be close to the CPM. The CPI plans to launch TV99. Chandrababu Naidu's son Lokesh no longer owns Studio N but the Telugu Desam has friendly channels ETV and ABN still batting for it in the broadcast space.

The grapevine has it that many other channels have allowed politicians to park money in them in “benaami” names. It is an arrangement that suits both parties. Most channels run a hand-to-mouth existence and the ready cash comes in handy while the politicians know they have a media house they can control, without being publicly associated with it.

With as many as 23 news channels slugging it out in an extremely overcrowded Telugu market, the casualty more often than not, is news. Reporters end up disseminating `coloured' and `filtered' news to suit the interests of their political masters.

But it is not as if the channels make money or matter beyond adding to the numbers. K Nageshwar, Chairman of 10TV says the glut of TV channels means not all influence public opinion. “The feeling is that political owners derive a lot of power from media outlets. That is not entirely true. Past experience has shown that media coverage does not have a decisive impact on the minds of the voters,'' he says.

But politicians stay invested because every politician finds the idea of owning a TV channel seductive as it helps him broadcast his version of the news and also rubbish his rivals on air. They do realise that in the era of the remote, it is difficult to sway the undecided voter to their side. The flip side, however, has been that the viewer is no longer king. The owner is.

The situation is no different in neighbouring Karnataka where Janata Dal (Secular) leader and former chief minister H D Kumaraswamy is invested in Kasturi channel, which is run by his wife Anita, who lost in the assembly elections this month. Therefore, it was surprising that this media baron chose to blame the media for projecting his party in a poor light in the run up to the Karnataka assembly elections. Businessman Rajeev Chandrasekhar, who is also an independent Rajya Sabha MP, owns Suvarna TV while also holding controlling stake in Asianet in the Malayalam television space.

Kerala's politicians are no different when it comes to succumbing to the lure of the seductive TV news world. The two main political parties are in the thick of it with the Congress owning Jaihind TV while CPI(M) runs Kairali TV and People TV. Another news channel, India Vision, also has political DNA.

What has helped in the mushrooming of channels is the reduction of costs in launching one. But apart from the politicisation of news that has happened, other unhealthy practises are also prevalent in many news networks, one example being payment of a part of the salaries in cash. This raises suspicion that some political owners use the news business to launder their black money.

``We run our news channel like a professional unit,'' says the owner of V6, G Vinod, who was Labour minister in Y S Rajasekhara Reddy's cabinet and also wears the hat of the president of the Hyderabad Cricket Association. But many of the owners realise that television can be a profitable venture only if you take care of the ground handling - the cable operators in this case. Sun TV is a success story because through Sumangali Cable Vison, the group controls the distribution throughout Tamilnadu and is able to dictate what channels the viewers get to watch. Tamilnadu has one of the highest cable TV penetration with 60 per cent of rural areas having access to a connection. Its presence in the DTH market through Sun Direct helps take care of those who want to migrate from cable to DTH.

As general elections draw near, the airwaves are only expected to get more shrill. Realising the campaign costs are only mounting, politicians are more and more likely to convert the idiot box to a booth to canvas for themselves. The biggest casualty will be good old-fashioned journalism on what is today derisively being referred to as Tell-Lie-Vision.

T S Sudhir is an author and filmmaker. He was earlier Resident Editor (South) at NDTV.

URL for this article
http://indiatogether.org/tv-media