MID-DAY MEALS
Hunger persists, attendance record patchy
Without a serious commitment from the government, and plagued by operational difficulties in managing its sheer size, the plan to improve school attendance through the provision of lunches for students has gone awry in Uttar Pradesh. Puja Awasthi reports.
31 March 2007 -

Tthe Mid Day Meal (MDM) scheme was launched in Uttar Pradesh on 28 September 2004 following many reminders from the Supreme Court, and from the beginning it appeared to be a case of too little, too late. The scheme spluttered to a start in 33,000 primary schools (of a total of 86,301 in the state) in only 16 of the 70 districts, and was immediately plagued by a lack of provisions and utensils, absence of cooks, and plain lack of interest. Now, a little more than two years after that beginning, the government is preparing to release the first ever-comprehensive survey of the scheme. But on the ground, it is clear that not much has changed since the flawed launch. Failure on various fronts was always predictable, given the government's lack of seriousness - it has taken this long even to constitute an MDM Authority with a monitoring cell for the scheme.

But Kakku Varma does not understand any of this. The youngest of five siblings, this six-year-old trudges to the Khandev Primary School in Banthra, on the outskirts of Lucknow, every morning in the hope of a nutritious meal, clutching a frayed bag, his toes peeping through a pair of shoes that are clearly too big for him. The first thing he notices upon arrival at the school is the kitchen door. An open door means food. Today it is shut. Just like it has been for the last five days. He says even on the rare days that there is food, there is never enough. "How do I study on an empty stomach?", he asks.

It is a simple question, but one that has been left unanswered by the state's policy makers as they struggle to get the basics right in a scheme that reaches out to the largest student population by far among all the states. When the MDM scheme was launched, 1.86 crore children went to schools. Two years later this figure has risen by 52 lakhs. An equally important challege is wide-spread poverty. In a state where 40 per cent of the population lives below the poverty line and is plagued by severe malnutrition, a mid-day meal scheme is a mass feeding programme unlike anywhere else.

At the state's Basic Education department, the state-level nodal unit for the scheme, figures are bandied about as proof of the scheme's success. And officials would like to believe that the large rise in enrolment during the last two years is the evident result of the MDM scheme. But with Sarva Shiksha Abhiyaan and a number of other government initiatives such as the provision of free textbooks and scholarships also being launched concurrently, only some of the gains in enrolment can be attributed to the meal programme. Moreover, as in many other parts of the country, the increase in enrolment bears little relation to the actual numbers who attend school for all hours. A study in 216 schools of 28 districts with a total enrolment of 34,359 students, carried out by the Movement for Right to Food and Employment, an umbrella organisation of 40 grassroots bodies, revealed that school attendance is uniformly poor and on average stands at a shocking low of 16 per cent. 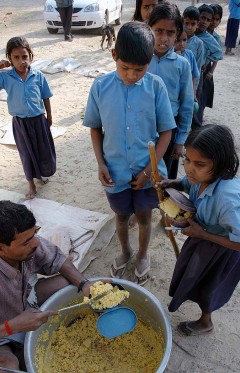 At Dewa Primary School, Barabanki, children bring their own tiffin boxes for their food, while according to the proviisons of the scheme, the school should provide them eating utensils.
(Picture by Puja Awasthi)

School officials are also under pressure to show rising enrolment. Shailendra Shukla, Principal of Narayanpur Primary School in Lucknow says, "There have been instances when children are enrolled in more than one school for the meal. Teachers are also guilty of marking absent children present just to prove that attendance is high. There is a lot of pressure to show high enrolment and retention figures even though children are not staying in school after the meal."

Kamran Rizvi, Director of the state's MDM scheme, is not particularly troubled by partial attendance; as he sees it, this is the lesser of two evils. "Even if a child gets nourishment for the mind and body for half a day, it is good enough. We conducted a survey in 2005 that revealed that 60 per cent of the children come to school without even a cup of tea. How can they be expected to study? In the absence of the mid day meal, many would not have come at all," he reasons.

The government has made efforts to increase the nutritional impact of the scheme. On August 15, 2006 the conversion cost - the recurrent cost other than grain, mainly the ingredients for the meals and the salaries of cooking staff - was upped to Rs.2 per child per meal, and a benchmark of nutrition - 450 calories, including 12-grams of protein per child per day - was set. This has been accompanied by a menu that makes profuse use of soyabean as a source of protein. For instance, it is to be ground and mixed in wheat for making chapattis and added to dals. The new menu has increased the amount of dal given to 25 grams daily, vegetables to 60 grams, and milk to 100 millilitres per student with the additional provision that those schools which have more than 200 students can make further improvements in the nutritional value of the food.

But as with enrolment, these figures too are misleading. These budgetary improvements have not reflected in the food that is actually served to the students. In the third week of March this year, it was discovered that food served by the NGO Ram Mahila Kalyan Samiti to the Kamta First Primary School in Lucknow, came in rusted utensils. At another school insects were found in the rice, while at a third the milk had soured. A rash of food poisoning instances happened in January 2006, and nearly 400 children fell sick in schools at Unnao, Varanasi, Azamgarh and Sitapur. In December 2005, a five-year-old died after eating the meal provided at the Akhana Public School in Kanpur. A month later two children died at the Adarsh Primary School in Meerut.

It is ironic that despite better child heath being one of the scheme's objectives, no such studies on the scheme's impact have been conducted. Now, the government is toying with the idea of inviting private agencies to carry out such assessments.

The culprit, according to UP's Minister for Basic Education Kiran Pal Singh, is the Food Corporation of India. "What can the state government do? The FCI comes under the Central government. I have written to the FCI to ensure supply of clean, quality foodgrain. Dealers have also been asked to ensure quality," he shrugs.

But UP's Lok Ayukta Justice Verma, who had dispatched fact-finding teams to check on the mid-day meal scheme in 2006, is far from convinced. "Children throw away food because it tastes bad or they fear that they will fall sick. The scheme is turning into a nightmare. Instead of providing nutrition and strength, the mid day meal is eating into our children's health. How do we justify something like this?" he asks, alarmed. The Justice's alarm is borne out by a study conducted by the Uttar Pradesh Voluntary Action Network (UPVAN) in 80 primary schools spread across 16 development blocks of eight districts. Almost 38 per cent of the interviewed guardians were convinced that the food was of a poor quality, while another 22 per cent felt it was average. Only 29 per cent of the respondents thought the food was good. Interestingly when the same questions were put to the Gram Panchayat members 43 per cent of them labelled the food bad.

Despite the provision of a weekly menu (painted on school walls) that provides an interesting mix of food options, most schools do not follow this. The resulting monotony puts children off. Diversions from the menu are attributed to lack of cooking utensils, as well as unwillingness among the staff to put in the required hours of work.

J N Singh, a consultant for UPVAN, says the fault lies in the mindset with which the scheme has been approached. "Children are entitled to the mid day meal as a right, yet they are treated like beggars. Food portions are small and served with little interest. There was talk of the mother's touch when the scheme was launched. That is completely missing. Children place their food on newspapers. There are no hand pumps to wash hands. The cook does not have clean clothes. And no one is bothered about what the children are eating." The quality of the food is also impacted by the lack of storage facilities. Instances of foodgrains being stolen are not rare.

Problems with the scheme are also linked to the poor compensation provided to the cooks, and from the rules for selection. Each of the 1.35 lakh cooks gets a paltry Rs.500. Cooking for 200 students leaves little time for other chores. And as per the scheme, while recruiting for these jobs, preference is to be given to Scheduled Caste and Dalit women, especially those who are widowed or divorced. This provision has resulted in communal tension on a number of occasions. In October 2004, in Mawar, a village in Kanpur (Rural) which is home to 2500 Muslims and Dalits, parents of Muslim children objected when the principal chose Savitri, a Dalit, to cook the mid-day meals. Angry parents threatened to withdraw their children. The confrontation turned ugly and the PAC had to be rushed in to control matters.

Teachers too have begun to regard the scheme a burden, because they are expected to assist in the operations of the scheme, and also held accountable for failures that are not directly within their purview. Rajesh Mishra, founder-director of Lok Mitra, a Rae Bareli-based NGO, says, "In rural areas, teacher involvement is a must. Most schools have only one teacher who is hard pressed to keep an eye on the quality of the food. As the gram pradhan is often unapproachable, complaints are made to the teachers. If utensils go missing the teacher is supposed to compensate. How can there be any enthusiasm?"

Mishra's comments are corroborated by senior officials of the education department who say the scheme has been done in by the multiplicity of agencies involved. The Department of Basic Education, district magistrates, Gram Pradhans, elected representatives, NGOs have made the scheme a mish-mash of shrugged responsibilities and failed objectives.

In government corridors there is the realisation that the scheme needs to be remedied at once. One reaction has been to start grading schools according to their commitment to the scheme. Another is to carry out surprise checks. Informed opinion holds that proper co-ordination, concentration of responsibilities with the Gram Pradhan, denial of scholarship if attendance falls below 80 per cent, and the establishment of separate accounts to deposit conversion charges, could all be helpful. Perhaps, but these are still only operational improvements. At heart, what the mid-day meal scheme in UP appears to need, is a commitment to the basic dignity of the state's children. Only when authorities accept that the short-changed children of India's most populous state need a real chance to get basic education, will there be a full answer to Kakku Verma's question.

URL for this article
http://indiatogether.org/upmdm-education