RIVER POLLUTION AND LIVELIHOODS
In Vapi, can decades of damage be finally turned around?

Rapid industrial growth brought wealth but also unchecked pollution to the town of Vapi. It impacted the local fishing communities by destroying their livelihoods. Manisha Goswami and Bharat Patel report on the decades of damage caused by the chemical industries in the area.

Vapi is a well-known industrial town located in Valsad district in the western part of India in the state of Gujarat. It forms a part of an industrial belt running from Vapi at the southern end of Gujarat to Mahesana (about 270 miles north) which has come to be known as the “Golden Corridor of India” for the wealth it has generated for industrialists.

However, over the years the area has also earned the reputation of being one of the most polluted industrial stretches in the continent, with both air and water being deeply contaminated. This has earned it another fitting epithet, ‘the armpit of India’. 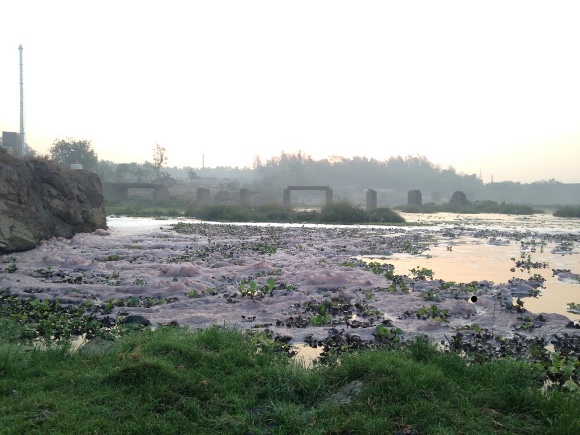 Vapi is perhaps one of the few municipalities in the country which has two rivers flowing through its limits carrying the industrial effluents. While, the river Kolak flows on the northern end, river Daman Ganga borders the southern end of this industrial town before it meets the sea. There is a large population, estimated to be over 5000, which is dependent on both these rivers and its estuaries for fishing. (Reference STATISTICAL DIARY year 2012-13)

During 1967-1968, the Gujarat Industrial Development Corporation (GIDC) was established in Vapi. As per the four phase-plan, approximately 1140 hectares of land was developed. This included residential areas and infrastructure facilities for around 1500 industries. Of these, around 70 percent of the industries produced a variety of chemicals like dyes, pigment, pesticides, and pharmaceuticals. The remaining 30 percent comprised of paper-mills, plastic, packaging, engineering and other small scale industries. In 1971, the Vapi Industrial Association was formed.

However, it was only in the year 1997 that the Vapi Industrial Association established the Common Effluent Treatment Plant (CETP). The Gujarat government had appointed a special High Power Committee (HPC) in 1993 to examine the efforts towards industrialisation in Vapi. This committee recommended a suitable policy to deal with environment protection on one hand and safeguard the existence of the Small Scale Industries (SSI) sector on the other.

The committee had concluded that the only viable option under the circumstances was to have a CETP to manage the pollution and environmental damage being caused by industrial effluents.

By the time the CETP was sanctioned and set up, there were clear reports of both groundwater and surface water being heavily contaminated. The pollution of Daman Ganga and Kolak rivers, including their feeder nallahs (streams) was at the heart of the problem. In fact in 1989, Vapi was formally categorised as one of the ‘Critically Polluted Areas’ of India by the Central Pollution Control Board (CPCB). 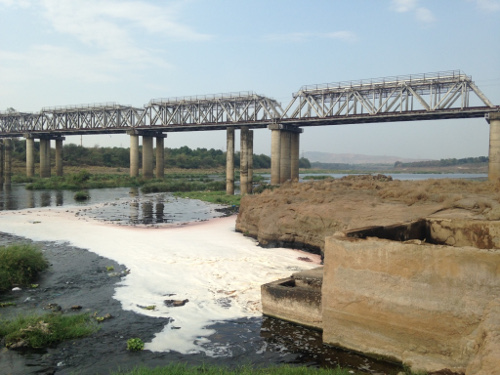 In 1995, there was a case filed in Supreme Court by Research Foundation, a NGO,   against the Union of India(writ petition(civil) No. 657 of 1995) over water contamination issues in Gujarat and Madhya Pradesh, which is still pending. The SC set up a monitoring committee following the petition and asked it to file a report before the court.

In the affidavit filed in this case between February and April 2004, Dr. N H Hosabettu, erstwhile Director MoEF and member secretary of the monitoring committee, clearly stated:

“1.5 As stated above, pursuant to directions of the Hon’ble Court and the Constitution of the Committee, the Committee or its Sub-Committee have visited different areas in country to evaluate the ground realities in so far as hazardous waste management is concerned. The Committee has found in some of these areas that the indiscriminate dumping of hazardous waste due to non-existent or negligent practices together with lack of enforcement by authorities has affected the groundwater and drinking water supplies have consequently been damaged. Site inspections at industrial estates of Vapi, Ankleshwar, and Vadodara in the State of Gujarat and Union Carbide plant in Bhopal, Madhya Pradesh (MP), have revealed that the dumping of hazardous waste or their neglect has resulted in total unavailability of ground water supplies.”

The affidavit observed that not much had changed since the HPC’s earlier recommendations to the court in 2001 and that it was important for the court to direct the state governments of  MP and Gujarat to immediately step in and supply fresh water in tankers or in pipes for drinking and agricultural purposes. It also laid out other recommendations for action to be taken to improve the groundwater situation and water supply for the affected communities.

The court also made an important observation that “the report records that due to indiscriminate dumping of hazardous waste due to non-existent or negligent practices together with lack of enforcement by authorities the groundwater and therefore drinking water supplies have been affected/damaged.”

However, neither the recommendations of the HPC nor the judgment dealt with the impacts on fishing or the contamination of the rivers. With no legal or regulatory action on this issue, the situation on the ground has only deteriorated. The Daman Ganga river continues to be highly polluted and pollution is also evident in the nearby coastal seawater. At one point of time there were around 1000 fishing boats but by the year 2011, there were only around 100 fishing boats in this region. The fall in fishing boats is due to the heavy pollution in the coastal area of Vapi.

The case for environmental compliance

The fishing community affected by the problem has been writing to various authorities and politicians since 2001. They claim that this has not led to any action or remedy. One of the authors of this article, Manisha Goswami has been working with representatives of the fishing community since 2011 and supporting the affected people in an adhoc manner, as and when it was possible.

In 2012-13, she joined the CPR-NAMATI Environment Justice program and adopted an evidence-based legal empowerment approach to seek remedies for the river pollution and fish contamination problems in both Kolak and Daman Ganga rivers. One of the first efforts of this approach was to understand whether the impacts that have occurred are because of legally permitted activities or due to non compliance of law or a condition in the regulatory approval.

An issue which came to light during this exercise was that the CETP Vapi had received consent to operate on 20 March 2014 from the Gujarat Pollution Control Board. One of the conditions of this consent, (consent condition number 3.3.2) was that the CETP inlet should have a Chemical Oxygen Demand (COD) level of 1000 mg/L and Biological Oxygen Demand (BOD) level of 400 mg/L.

The table below presents a comparison of data pertaining to the last 5 years as published by the GPCB. Increased levels of COD and BOD adversely affect the river ecosystem, especially the fish life cycle, growth and food chain.

This impact has been published in a research paper published by the National Council for Stream Improvement as well as the American International Journal of Research in Formal Applied and Natural Sciences. The paper by Priyanka Sharma and Dr Sujata Gupta related to the amount of oxygen (BOD, COD) in water and their effect on fish.

It is evident from above data that the consent condition 3.3.2 has been continuously violated for the last five years as the figures are way above the designated requirements as per the Consent to Operate issued by the GPCB. Also, due to increased COD and BOD level in the river water, as evident from the inlet and outlet data, the fishermen living along the banks of the river Daman and Kolak are unable to sustain their livelihoods.

The authors and the affected community also found out that on 1 April 2014, the National Green Tribunal (Western Zone Bench) recorded in its case no. 34/2014 – [Tarun Patel vs Gujarat Pollution Control Board (GPCB), petition judgement para no. 4] – that the effluents released from CETP are beyond the consent condition limits. Moreover, despite the Ministry of Environment and Forests (MoEF), Government of India declaring Vapi as a ‘Critical Polluted Area’, there has been no improvement in terms of effluents released from the CETP.

Other than the above legal requirements, the Vapi action plan of the GPCB states that the treated effluent from the CETP must be discharged in the deep sea through a pipeline, and not in Daman Ganga river, as has been done. The discharge pipeline was to have been installed by 31 December 2012, which has not been done. 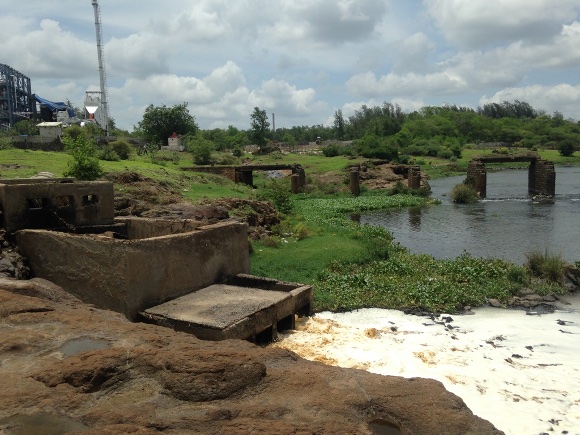 While the impact of pollution on Vapi has been a public issue from the beginning, it is only now that there is clear legal evidence for violations and non-compliance available with the citizens of Vapi. The open discharge of effluent into the river has continued unabated, destroying its biodiversity and ecosystem, including in the nearby coastal waters.

The complaint and its impact

It took eight Right to Information (RTI) applications to gather the required evidence and information, following which the fishing community from Daman Ganga submitted two detailed letters to the Gujarat Pollution Control Board (GPCB) in Gandhinagar.

In one of the RTI responses dated 28 October 2014, the GPCB informed the applicants that the consent to operate was given based on treatment measures of the effluent waters and the last consent was given by the GPCB as of 20-03-2014.

However, the responsible authority did not take any action upon receiving the two letters from the fishing community. After waiting for almost five months, the affected community sent yet another complaint to the GPCB on 7 March 2015, reiterating their points and sharing updated evidence.

Following up on the complaints and submissions, the Gujarat Pollution Control Board (GPCB) brought around 53 red category industries under its Continuous Amazon Online Monitoring System. These industries were issued instructions along with a closure notice on 27 March 2015, to “install online effluent quality monitoring system at the outlet of effluent treatment for the measurement of the applicable parameters not later than May 31, 2015.” This is applicable to those industries whose inlet pipes discharge more than permissible levels of COD and BOD.

The industries which were directed to install the online monitoring metres were asked to report to GPCB and integrate with the online monitoring system set up by the Board. They were directed to submit a 100 percent bank guarantee and close down their industries for 15 days upon receipt of closure notice.  The 15 days period was to get a response from the defaulting units while the online meter had to be installed by 31 may 2015.

One of the biggest implications of the issuance of the 53 closure notices is that the problem of pollution and water contamination in Vapi has now been officially acknowledged to be the result of legal violation. The acknowledgment of the problem by a regulatory authority such as the GPCB can go a long way in forging a process through which a solution can emerge. This is an immensely significant step towards resolving the decades-old problems of an area such as Vapi.
However, the problem is far from remedied, and will require constant public monitoring and intimation to the authorities so that timely action can be taken.

But while doing so, we must also reflect on the question of the past and the future. Where does the liability really lie? Who is responsible for all fishing livelihoods lost due to an illegality and disregard of law? Even as the efforts towards legal empowerment can achieve an important step ahead for the people dependent on the Daman Ganga river, how can these situations be prevented?

The authors are associated with the CPR Namati Environment Justice Program in Gujarat.

URL for this article
http://indiatogether.org/vapi-decades-of-damage-environment