VIDARBHA AND WATER
Hope in the season of hopelessness
"This is the first year I sowed wheat on an acre of land because of availability of water in the bund along my farm," informs a three-acre farmer Vasanta Kolhe in Hatgaon village, Yavatmal district, Maharashtra. His income will see a little improvement this year, thanks to a bund that students built. Jaideep Hardikar reports.
12 March 2007 -

: An excited 10-year-old Ram Runde leads us briskly to a small rivulet piercing his village farms. Nilesh, Manoj, Dhanraj and other kids too join us. "Come this way," they all shout at us, hopping and dancing their way to the rivulet that has now gone absolutely dry. "Here, see, this was the bund that we built this year." A bund is a temporary structure built across a rivulet or stream (or a nullah) to create water storage. Ideally empty cement sacks are filled with fine sand and stacked across the rivulet to block the stream and create backwater storages.

Ram and colts are Standard-IV students of the ZP Primary Marathi School of Bori Arab village in Darwha block of Yavatmal district. This past December, they got together in an initiative that is set to light a glimmer of hope in the district that has seen farmers' suicides surge to alarming proportions these past two years. 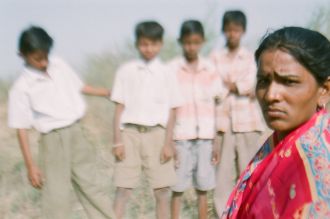 Students of ZP Primary School at Bori Arab village in Yavatmal in the background, while their mid-day meals cook Jaya, an SHG-member, looks on. The women and students together built bunds across a rivulet flowing along their village. Pic: Jaideep Hardikar.

Students, joined in by women of self-help-groups, are building their future that was otherwise grim, and rekindling hope among depressed farmers, here.

"It's gone dry now, but has already achieved the objective," adds Lukman Shah, a landless farmer who cultivates a temple-owned farm on lease in Bori, a village 30 km from Yavatmal town on Darwha road. Lukman says many a farmer could take the second crop for the first time in this village because of the bund.

Adds Jaya Wankhede, the school cook and SHG member: "We gave one day to this work, and the entire village saw how important it was to their prosperity."

"This is the first year I sowed wheat on an acre of land because of availability of water in the bund along my farm," informs a three-acre farmer Vasanta Kolhe in another village, Hatgaon. His income will see a little improvement this year, thanks to a bund that the students built. Kolhe's son was a part of that effort.

Several such testimonies show that beyond the failure of irrelevant government packages, one-school-one-bund' is turning into a slogan of hope in suicide country.

"Necessity," quips a young Zilla Parishad (ZP) CEO, Dr Shrikar Pardesi, "is the mother of all inventions." And so, it began after the pinching water scarcity in the summer of 2005, following a severe drought and a failed monsoon of 2004. That year, as Pardesi remembers, the Zilla Parishad had to scale up the number of water tankers to 192 from an average 35 before that year during summer.

Kids from over 1800 ZP schools and women of 2000 self-help-groups came together to harness water and enliven hopes among the village farmers.

Two-three lakh people were involved in the initiative.

Nearly 8000 bunds (Vanrai pattern) were constructed on rivulets and streams.

Not a single rupee spent.

•  Theatre of hope
•  Replying with bullets

"Villages were clamouring for water," he reminisces. "But we could hardly do anything." Pardesi had assumed this office in November 2004. Measures went on war footing, but he realised a long-term solution was the need of the hour. The next monsoon, the young CEO, who comes from a small village in Satara district of western Maharashtra, employed his wisdom to moot ideas for water conservation within the available means and resources. "It's key to the farmers' resurrection as well."

He saw a glimmer of hope, in the district of hopelessness, in students of the ZP schools. "The army of school students is a huge strength," he says. "Later I felt the self-help-groups too could be roped in to build temporary bunds to store water and improve ground water table and recharge the farm wells as well."

Pardesi's estimate proved correct: Over 2000 women's SHGs and 1866 ZP schools in the district pooled together their strength to construct close to 8000 such bunds all over the district, on the small rivulets, big rivers or any flowing small stream. This was the second year. Next year, if monsoon is good, target would go up, and the mood in villages indicates that people would come together in a big way

By December 2006, the initiative in its second year had harnessed hundreds of thousands of cubic meters of water that would otherwise have gone waste, if untapped or not blocked. It helped farmers take the winter crop and recharge their wells. In many villages, the backwater catered to the livestock needs.

"I could have got these bunds constructed under the EGS, but I deliberately did not go ahead with that plan; I felt the small demonstration of collective power might augur well for farmers too," Pardesi says.

"It was easier to convince students and women," says Pardesi. And luckily, as it turns out, there was no apparent opposition to it from the political class.

Only 40,000 ha of the 9 lakh ha Kharif cultivable area takes the second crop. This year, statistics show, area under Rabi crop in this district went up by another 50,000 ha. And these small bunds had a lot to contribute to irrigating this land.

What it achieved is threefold. One, it saved rain water that would have gone waste and created scope for second crop and fulfilled livestock needs. Second, it saw a remarkable increase in ground water table in villages and wells. Thirdly, it has sown seeds of unity  hope that opens up ways to tackle the crisis together.

This summer, the need for water tankers has declined. "Bori Arab, for instance, had to shell out Rs 60,000 on pumping water from the neighbouring river during summer; this year there's no need for it, the water table is good," says a villager.

Next year, as Pardesi tells us, students will plant a variety of trees that could bring some income to the village communities.

Building the bund is simple and fun, explains an ebullient Ram. And life too!

URL for this article
http://indiatogether.org/vidbunds-government