WHITHER ENVIRONMENTAL JUSTICE?
How Karnataka's mega port project is bending the rules

It was in the year 1994 that India got its formal notification related to Environment Impact Assessment (EIA). In 1997, a clause was added to this law, which made public hearings a mandatory requirement under it. Drawing its mandate from the Environment Protection Act (EPA), 1986, this notification had the primary purpose of ensuring that an environment of lived-in space was not damaged by decisions to set up industrial and infrastructure projects.

The EIA notification involves four major steps: Screening, Scoping, Public Consultation and Appraisal. After a project proponent submits its application for environmental approval, a thematic expert committee of the Ministry of Environment, Forests and Climate Change issues the Terms of Reference (ToR), according to which an EIA for the project is to be prepared.

Once the draft EIA is ready, the public consultation phase follows which includes the conduct of a public hearing. A complete procedure for public hearings (to be organised by the State Pollution Control Board) is listed in the EIA notification. In the final stage of appraisal, all relevant documents as well as public consultation submissions and proceedings are placed before a thematic expert committee for a decision.

It’s been over twenty years now since the regulation was promulgated and it has gone through substantial reengineering, most notably in 2006. With the change in the investment scenario in the country, several new issues have emerged that challenge the very framework of this law.

The implementation of the EIA notification continues to be plagued by procedural irregularities, piecemeal and inadequate assessment and half-hearted attempts to ensure people’s participation in environmental decision making.

Many of these issues came to light once again at the public hearing for a proposed sea port at Tadadi (or Tadri) in Kumta Taluka in Uttara Kannada district of Karnataka. This public hearing took place on 23 March 2015 and was conducted by the authorities despite early written submissions to them indicating critical legal as well procedural lacunae. It has also come to light that some violations of the EIA notification were pointed out through a legal notice and other formal letters sent prior to the public hearing.

In addition, scientists and ecologists have pointed out that the construction of the port would damage an ecologically fragile coastal ecosystem, and this was well known at the time of the public hearing. 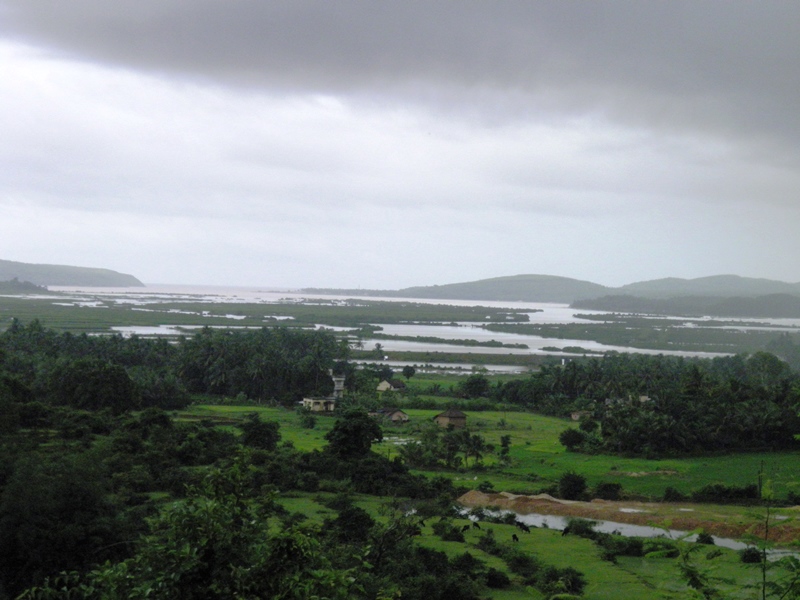 The area where the Tadadi sea port is proposed to come up. Pic: Kanchi Kohli

Tadadi seaport and its cumulative impact

The state government owned Karnataka State Industrial and Infrastructural Development Corporation Limited (KSIIDC) is the project proponent for what is to be the largest port in Karnataka. The feasibility report and the EIA document clearly indicate that the proposed cargo handling capacity of the port will initially be 34.25 million tonnes per annum (MTPA) with a final designed capacity of 62.360 MTPA.

The draft EIA report also brings out that the port is likely to handle “50.51 million tonnes per annum (MTPA) of coal and iron ore as well as 11.85 MTPA of steel products, general cargo and containers …”

The development of the port is strategically linked to the iron ore mining districts in North Karnataka, especially the iron-ore belt in Bellary-Hospet. There are two National Highways (NH 33 and 66), which are currently being expanded and will act as a link to the proposed port.

Two critical questions are thrown up almost immediately by the above facts.  The first relates to the fact that construction of the port clearly comes along with a plan to increase iron ore mining, coal handling and road expansions. However, the impact assessment has only been carried out for a port, which will handle 34.25 MTPA of cargo.

This brings us to the second point, which relates to the fact that KSIIDC, the Karnataka State Pollution Control Board and the Expert Appraisal Committee (EAC) at the Ministry of Environment, Forests and Climate Change (MoEFCC) are all aware that the ultimate cargo handling capacity of the port is going to be almost double of what is being stated presently.

Yet, the KSIIDC has submitted a proposal for environment clearance for 34.25 MTPA, the EAC has approved the Terms of Reference (ToR) for an EIA of the same capacity and the public hearing, too, is done for a project of 34.25 MTPA. Such instances raise larger policy issues on whether it should be acceptable practice to receive and appraise an EIA report for a smaller capacity when the ultimate capacity of the project is known.

A similar issue had arisen in the case of the construction of the steel plant and captive port of M/s POSCO India Limited in Odisha. While the agreement with the state government there was to construct a steel plant of 16 MTPA capacity, the EIA report and subsequent public hearing was done only for a 4-MTPA plant. This became an important legal question when the environment clearance of the project was challenged before the National Green Tribunal (NGT).

The National Environmental Engineering Research Institute (NEERI), Nagpur, prepared the draft EIA report for the Tadadi seaport in February 2014. Other than the quality of the information in the report, there are some critical legal problems which surface therein:

Several aspects of the EIA report do not conform to the requirements of the ToR. For instance, one point requires the EIA report to state thepossibility of “transplanting the existing oyster bed”, which will be impacted by the construction of the port. While the EIA report acknowledges the impact, it does not provide any plan for this transplantation.

Similarly, despite the requirements of the ToR, several ecologically sensitive areas, especially mudflats and mangroves, have missed a mention.

2. Public Hearing Notice: How the public hearing should be conducted has been elaborated in detail in Appendix IV of the EIA Notification, 2006. The EIA notification mandates that notice of public hearing be given at a minimum of 30 days prior to the date of actual hearing.

In this case, however, the newspaper advertisements informing the public of the date, venue, time and the location where project-related documents would be made available to the public, were issued only 28 days prior to the hearing.

Both the timing of the notice and the availability of documents are important to ensure maximum amount of informed participation.

It is important to reiterate here that the public hearing still remains the only time in the entire environmental decision-making process when the affected people, the project authority, government agencies and the consultant who has prepared the EIA report come face to face.

The issue of non-compliance of the EIA with the ToR, the different capacities mentioned in the ToR and the final plan of the port, as well as the inadequate notice period were all brought out in a legal notice issued to the Karnataka State Pollution Control Board (KSPCB) prior to the public hearing. The notice forewarned the KSPCB not to go ahead with the public hearing, given that there are irregularities in question.

The existence of this legal notice became public information only at the time of the hearing. The notice had been sent to the KSPCB on 19 March 2015, four days prior to the date that the public hearing was to be held. It had been sent by Advocate Ritwick Dutta, on behalf of his client Maruti Ashok Gouda, a resident of Aghanashini village, which is going to be impacted by the construction of the port.

The legal notice indicated to the authorities that even the draft EIA report should be in full compliance with the ToR. This is especially because it is the only document available to the public to help them arrive at an informed opinion. It highlighted that a public hearing can be meaningful only when the people are informed about the impacts of the project. An inadequate EIA report in violation of the ToR cannot fulfill these requirements.

Some of the submissions made at the time of the public hearing indicate that there are significant lacunae in the impact assessment itself. For instance, while the EIA report highlights that fishing and bivalve collection are important occupations in the area, it also states that the existing fishing port at Tadadi will have to be shifted. However, there is no outline provided of where this will move, of its feasibility or other implications.

A submission made by Dakshin Foundation also highlights that the estuary of the river Aghanashini, where the port is proposed to be constructed, is one of the most biologically productive coastal systems in Karnataka. Further, the Karnataka Forest Department has proposed this location to be declared as a Biodiversity Heritage Site (BHS) under the Biological Diversity Act, 2002.

There is also a proposal led by the Bivalve Collectors’ Group to declare the area a Critically Vulnerable Coastal Area (CVCA) under the Coastal Regulation Zone (CRZ) Notification, 2011.

The same submission also brings out the issue of plagiarism. It states that a study by scientists from the Indian Institute of Science (IISc), Bengaluru has brought out that the bivalve-based economy of the Aghanashini estuary generates an annual revenue of Rs 57.8 million. The Dakshin Foundation submission highlights that the entire EIA chapter on bivalves (9.16-9.18) “is a blatant plagiarisation of this IISc study”, and goes on to argue that this should be one clear basis to reject the EIA report.

There is a mandatory requirement under the EIA notification, 2006 for a public hearing to be concluded with a compilation of the proceedings and reading out of the minutes before the public. However, while the public hearing for the Tadadi Sea Port was conducted on 23 March 2015 as scheduled, the above did not take place.

The Deputy Commissioner has instead announced that the minutes will be read out before the public on 27 March 2015. The EIA notification does not have any provision for such a decision where the public hearing is called to an end on one day and reconvened a few days later, only through an oral announcement, for the minutes to be formally communicated.

While the EIA and public hearing for the Tadadi port has rekindled several old and long pending issues, it has also brought to the fore some more critical concerns. For instance, submissions made to the KSPCB (including one by CPR-Namati Environment Justice Program) have highlighted the need for a Detailed Project Report (DPR) to be available prior to the conduct of the public hearing. This was a requirement of the 1994 procedure, but was dropped when the 2006 re-engineered notification was issued.

Much reform is needed in the environmental regulatory framework in the country and its administrative implementation. Meanwhile, projects such as the Tadadi sea port keep reasserting the fact that rule of law is a necessary condition for environmental justice.

The author is with Centre for Policy Research-Namati Environment Justice Program.

URL for this article
http://indiatogether.org/violations-in-eia-of-tadadi-port-project-karnataka-environment