FILM REVIEW: AB AUR WAQT NAHIN
Is it too late for Jharkhand's adivasis?
"There is this growing feeling among the adivasis of Jharkhand that in this newly created state, given to them only in name, they stand at the crossroads," runs the commentary in Ab Aur Waqt Nahin, a documentary film directed by Abhijoy Karlekar. Shoma Chatterji reviews the film.
12 January 2007 -

Is it really too late to rescue the tribal communities of Jharkhand and their culture, ethnography, lifestyles and livelihood from slow extinction? Is the birth of Jharkhand as an independent state six years ago, comprising 18 southern districts of Bihar, squarely responsible for the death-like mutation in the lives of its adivasis? Shape, a communications design and production company, has produced Ab Aur Waqt Nahin (Time is running out), a documentary that raises many questions like these. The film was first screened to a small invited audience at Max Mueller Bhawan, Calcutta, in September 2006.

WAQT, an acronym for the film's title, offers some answers that are an indictment to the statehood of Jharkhand, acquired at the expense of those who once formed a major slice of its population  the adivasis. Produced by Ahmed Hussain and directed by Abhijoy Karlekar with brilliant cinematography by Ranajit Ray, WAQT traces the roots of the adivasis of the region and, portrays their self-sufficient agriculture-based economic system. The film is interjected with snapshots from the sorry present and dialogues with people who have been involved in the movement to sustain and reclaim the rights of the adivasis. 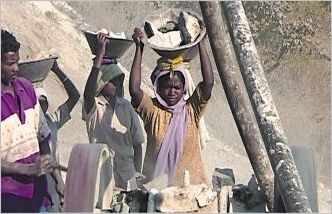 "We are not against development per se," says Karlekar, "but we are trying to say that there are ways of attaining development that would not harm the lives and livelihoods of the original inhabitants of the state." The film, however, does not offer these alternative strategies for development. "We have tried to place the crisis of adivasi agriculture in the larger context of Jharkhand's political and economic history, positing the indigenous adivasis and their ecosystem against overwhelming national interventions that have carved out an industrial and urban state in Jharkhand. This has resulted in effectually altering not only the environment of this new state, but also its demography," Karlekar elucidates.

The Mundas, the Hos, the Santhals and the Oraons are the four major adivasi tribes who came to settle in these areas about 2500 years ago. They were cultivators, harvesters of the forest produce and hunters. The tradesmen who later stepped in to complement their livelihoods were welcomed to share their environment. It took 70 long years of struggle for a separate statehood that finally resulted in the formation of Jharkhand. The struggle was fought and led entirely by the adivasis. Yet, now that statehood has been achieved with effect from 15 January 2000, these very adivasis have been marginalised, oppressed, humiliated and in other words, told to mind their own business in their own way.

The current situation is such that the adivasis now constitute only 26 per cent of Jharkhand's population, with four million of them having migrated from Jharkhand as wage labourers. They have been replaced by an equal number of non-adivasis from Bihar and Uttar Pradesh who came to Jharkhand all within the 30-year span from 1970 to 2000. "There is this growing feeling among the adivasis of Jharkhand that in this newly created state, given to them only in name, they stand at the crossroads," says the commentary.

As their traditional lifestyle has changed, the adivasi woman, who was once an equal decision-maker in her society, has now been reduced to a coolie in the labour market.

•  Irulas push for upliftment
•  What is ours?

Over the years, as WAQT records, the adivasis have lost their traditional land too. Though the sale of adivasi land to non-adivasis remains prohibited under the Schedule V of the Indian Constitution, the film points out that in the 14 scheduled area districts of Jharkhand, it is common to find that adivasi lands have been transferred in the names of non-adivasis. In the opening lines of its commentary, the film reminders the audience that under Schedule V and VI of the Indian Constitution, it is the responsibility of the Indian State to protect the environment, economy and culture of the country's indigenous adivasi communities that form eight per cent of the national population and who live within traditional ecosystems across the country. These constitutional rights have been maintained more in the breach than to the letter as WAQT details in over its 104 minutes of running time.

WAQT shows that over one hundred years of change have created two Jharkhands, one comprising Chaas, the boomtown that grew along with the 2-million MT integrated steel plant at Bokaro, and the other consisting of adivasis desperately trying to eke out a livelihood where virtually none seem to exist. So they are forced to leave home and hearth to seek food elsewhere. The people of Chaas are hardly aware of the adivasi Jharkhand. Lalpur Chowk in Ranchi has become a meeting place for two kinds of people  the non-adivasi labour contractors and the cultivators from the hinterland, mostly consisting of adivasis looking for work as labourers in the capital city of the state.

The reasons for this widespread displacement of the adivasis are many. The film points to the network of six dams and seven power stations created in the mid-1960s as part of 2nd and 3rd national five-year plans, noting the wreckage it caused of the Chhotanagpur Plateau and its river valleys. The Damodar Valley Project was initiated for industrial and urban development of eastern India. But what it actually achieved through the dams and power stations was to displace 100,000 cultivator families from their natural habitat with nothing more than a token compensation.

But the final nail on the coffin for the adivasis came with the nationalisation of the coal industry in 1972, introducing open cast mining that changed the scale and cost of mining and increased its impact on the environment. By 2000, 206 mines had begun to function of which 140 are open cast mines accounting for 80 per cent of the coal production in Jharkhand. No individual or political party, even the opposition, ever cared to find out the human cost of uprooting traditional cultivators. No group within the state or the centre cared to pay attention to the massive state-sponsored ecocide that began with the command of the coal belt over the economics and politics of the state. Damodar, the life-thread of Jharkhand, continues to get polluted by coal washeries and power stations. Over 150 kilometres through the coal belt, the Damodar River is absolutely bereft of fish.

The uprooting of the adivasis impacted their society only further. As their traditional lifestyle has changed, the adivasi woman, who was once an equal decision-maker in her society, has now been reduced to a coolie in the labour market. In one scene, as the film traverses through the countryside, the camera closes in on a rippled up hillside and a stone quarry where the women and children of Bargutu, a village of adivasis, work as coolies. Inevitably the film also covers the abuse of adivasi women. No legal action has been taken against the 82 cases of rape of adivasi women by non-adivasis in 2000, till date. 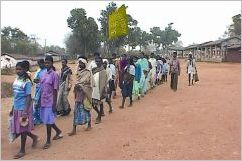 Aren't the adivasis fighting back? They are, in their own small way and WAQT has captured this. The film shows collective groups joined in solidarity against any violation of their rights. In the 1990s for instance, the Government of Bihar sought to take over 1471 square kilometres of land near Netarhat. The purpose of the take-over was to offer space for a field firing range for the heavy artillery of the Indian Army. This would have displaced people from 245 villages. They all united to resist the army and stopped their convoys from entering the notified area.

They are trying to reclaim control over what was once theirs by right, by occupation, by culture and by demographic majority, by seeking to control their local environment. An example in WAQT is their reclaiming hold and control over Barambe Haat, a thriving vegetable market for many years. Till 1999, non-adivasi traders and their touts forever trying to cheat and exploit the adivasis controlled the Haat. In 1997, local villages organised themselves and demanded their right to run the market as per the rules pertaining to Scheduled Areas. This led to a killing but it forced the government to hand over the market to an Adivasi-organised Bazar Samiti, according to Bandhan Tigga, one of the crusaders of the movement.

WAQT also records the strugge of the adivasis to enforce the customary powers of the Gram Sabha. One of these Gram Sabhas has formed a Forest Protection Committee in Kundrijhoor in West Singhbhum District. This was to rebel against a timber mafia, which, in league with the employees of the Forest Department, was plundering their forests. In October 2001, members of the Forest Protection Committee fought off the mafia and reclaimed 1500 acres of forestland. They grew the forests back within the next four years and the Forest Department was forced to surrender to their claim.

Today, Jharkhand adivasis comprise 31 active groups in seven districts controlling 100,000 acres of reclaimed forests. The state government is trying its best to contain this movement by trying to form Village Forest Committees. But no one is willing to join or work for these committees. 'Self-Rule through Direct Action' seems to be the bottomline for the victimised and vandalised adivasis of Jharkhand, as seen in WAQT.

And yet, though the adivasis are organising, one cannot still not deny the film its right to the title  Ab Aur Waqt Nahin  time is running out.

Despite being slightly lengthy, WAQT manages to sustain interest and attention mainly due to its no-nonsense, no-holds-barred approach to the issues, even though they are not necessarily resolved. It is not the task of the documentary filmmaker to offer solutions since the makers are distanced from the issues themselves. WAQT is a balanced blend of form and content, straightforward yet aesthetic, with a melodious musical score by Ram Dayal Munda that adds to the authenticity of the film and takes it closer to the audience at the same time. Anup Mukhopadhyay's sound mixing is just right as is Utpal Basu's editing. Even to the uninitiated, WAQT is informative, educative, enlightening. It succeeds in raising moral questions about justice and fair play in a world of injustice and corruption. John Grierson once said, "Documentary is the creative treatment of actuality." WAQT reminds us of this classic definition of the documentary.

URL for this article
http://indiatogether.org/waqtfilm-society