COST OF DEVELOPMENT
Industrial corridors: Boon or bane?
The proposal to create two industrial corridors around Bangalore has generated heady excitement, but this needs to be tempered with rationalism and transparency around water and land acquisition, says B S Nagaraj.
19 March 2013 -

A proposal to set up two industrial corridors passing through Bangalore has been talked about for a couple of years now, but British Prime Minister David Cameron's recent push and later Union Finance Minister P. Chidambaram's mention of the two corridors in his Budget speech has created an intense buzz in the industry.

High speed road and rail networks, industrialisation in under-developed regions, job and wealth generation, and smart/green cities are all part of the plans in these two mega infrastructure ventures. Understandably there is a lot of expectation that the corridors will change the landscape of the towns and cities that lie along their alignment. But what is not known yet are the social costs, and impact on resources like water and the environment in general.

Bangalore is expected to become the fulcrum around which much of the development will take place. Among other benefits, it has been cited that the 1500 km Mumbai-Bangalore and 330 km Chennai-Bangalore corridors will help decongest Bangalore. But will they really decongest the city or further increase the pressure on its already stretched infrastructure? 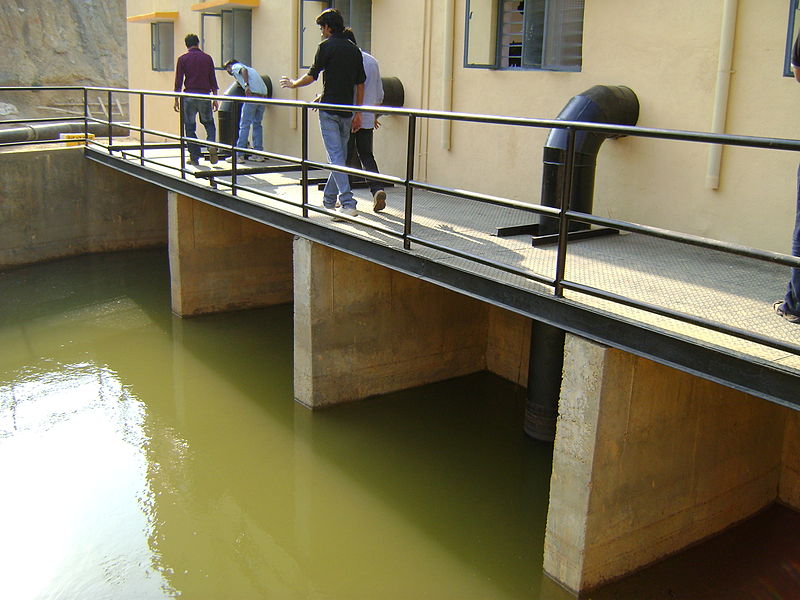 The Hemavathy Canal, which provides for the bulk of water requirements in Tumkur is designed for 30 MLD, but only 13-14 MLD is available at present for drinking water. [SRC: http://www.tumkurcity.gov.in/ws] Photo: Siddharth P. Raj via Wikimedia

Between the two corridors, there are at least three towns within 100 km of Bangalore that have been identified as hubs for development. Bangarpet is 90 km, Tumkur 70 km and Hoskote just 25 km away. Given their close proximity to Bangalore, they are unlikely to act as “population counter magnets”. Instead, it can well be expected that the reliance on Bangalore will increase, at least till the time the required physical and social infrastructure are in place in these to-be-developed industrial hubs. If the intended counter magnet concept doesn't work, resources like water, housing and electricity will come under more strain. Even if the impact on Bangalore is temporary, we do not know what measures have been planned to handle it in the city.

While the impact on Bangalore is surely a cause for concern, we are also in the dark as far as the scale and range of negative impacts of the corridors are concerned, leave alone the mitigation measures that have been incorporated into the scheme of things.

Let's take the case of the National Investment and Manufacturing Zone (NIMZ) proposed at Tumkur. This zone will be integrated into the Mumbai-Bangalore corridor as well the Peninsular Region Industrial Development Corridor (PRIDe). This integrated urban industrial township will be spread over a 50 sq km area.

We do not know as yet how the Karnataka government proposes to go about implementing NIMZ but from the little information that is available in the public domain, it is known that availability of water in Tumkur will be a major disadvantage. The Tumkur region is perennially short of water and the scarcity will only get exacerbated with NIMZ. It is estimated that NIMZ alone requires 60 to 75 mld of water which is double the requirement of Tumkur town as of today. How is the government planning to augment supply to the town and NIMZ?

In fact, not just Tumkur but other proposed hubs such as Bharamasagara, Haveri, Savanur, Yelburga, Hukeri and Navanagar (Bagalkot) along the Mumbai-Bangalore corridor are historically water-deficient. In such a scenario, the cost of providing access to water, if at all, for the townships will become exorbitant. The same goes for the Chennai-Bangalore corridor as well. Water in Bangarpet, a proposed hub, is as scarce as gold in the neighbouring mines at Kolar Gold Fields.

Steel, cement, food processing, IT/BT, automobiles, readymade garment zones, petroleum, chemicals and petrochemicals are among the sectors most likely to take advantage of the industrial corridors, according to representatives of the industry. Many of these industries are water-intensive and defy the logic of being set up in water-deficient areas. There could emerge a situation where the drinking water requirements of the people will be short-shrifted in favour of the needs of the industry.

As it is, India is categorised as a “water stress zone”by the International Water Management Institute and a third of its rivers are severely or moderately polluted. In the Delhi-Mumbai industrial corridor that is under implementation, it is assessed that there is little water left in the rivers for diversion to new projects. The situation is not too different in areas covered under the Mumbai-Bangalore corridor as well. Adding to the complexity, Karnataka is already in conflict with neighbouring states over the sharing of its river waters, both in the Krishna and Cauvery basins, and any move to make use of these rivers to feed the industrial corridors will have far-reaching consequences.

Besides the impact on natural resources and on the environment, there appears to be no estimation of the social costs of these mega infrastructure ventures. Even though it is still early days, land acquisition and loss of livelihoods, and resettlement and rehabilitation are concerns that need to be addressed on priority.  The Centre's policy states that the "NIMZ would be preferably developed on wastelands, infertile and dry lands not suitable for cultivation. The use of agricultural land will be kept to a minimum." The operational word here is "preferably." From what we know, around 23 sq. km. of land has been acquired in Tumkur and Gubbi taluks so far for this project. There is no clarity yet on what kind of land this is.

In another instance, the Industries Minister Murugesh Nirani had been quoted as saying one lakh acres of land have been identified along the Mumbai-Bangalore corridor, but "we don't want to curb the farmers' rights until the investments are guaranteed.”By implication, therefore, some part of the identified land could be agricultural. He goes on to add that "70 per cent of the local farmers" would have to give their consent for the acquisition.

It may also be interesting here to recall that Savanur, one of the hubs identified for development, used to have flourishing betel vine cultivation and trade for decades. In recent years, thanks to scanty rainfall, lack of a perennial water source and depleting ground water levels, betel vine cultivation has fallen on bad days. It is only recently that the state government has put into implementation an irrigation project that combines the advantages of lift and drip irrigation technologies in 9900 hectares in three taluks of Haveri district including Savanur.

While it is possible that the identified zones may be developed for industry without significant displacement or resettlement issues for the local land-owning population, it is time the project authorities place all the relevant information in the public domain in order to facilitate an informed debate on the costs and benefits involved. It is imperative that projects of such magnitude and with far-reaching consequences be transparent in the way they are planned to be implemented.

B S Nagaraj is an independent risk management consultant and journalist.

URL for this article
http://indiatogether.org/water-opinions