PROSTITUTION
Trapped from all sides
Young women and girls in red light areas face extreme levels of desperation, stemming partly from poverty, but also because of sheer physical exploitation, even by husbands and fathers. Ruchi Choudhary reports.
28 May 2011 -

Soma is a woman in her forties - fair complexion, soft facial features, her black hair loosely tied in a pony tail, with a flick of it coming out in front. She has a charming smile. She was born in Nepal to very poor parents. Her father was a construction worker. At the age of 11, she and one of her cousins were sold to agents in an auction - in the middle of the whole bazaar. She doesn't remember the price she fetched - she was too young to understand the various denominations of money.

She was brought to a brothel in Sonagachi - literally meaning 'the golden tree', the biggest red light area of Kolkata. She initially resisted when she was locked in a room with a client and suffered heavy thrashing, along with other girls of her age. "I was afraid of the tall, elderly men. I was very small then. Now I don't fear clients. I have gotten used to [them]." she recalls.

The money from the client was collected by the brothel owner. Soma says, "I do not remember what rates I fetched, but it was very low. We never got to see the money. Life there was very harsh - no food, sleep and constant beating." Soma escaped from Sonagachi one night, and her face turns pink when she mentions about how she fell in love with the cab-driver Sunil Saha and married him. "He left me for another woman", she says casually. She landed up in Kalighat - the oldest red light area of Kolkata. Here she began to work independently as a sex worker and started earning money for herself.

The Kali temple in Kolkata is a busy area, where thousands of devotees come daily to offer puja. The tradition of worshipping Goddess Durga, considered to be a symbol of shakti or strength, is more than 500 years old in Bengal. At the corner is Nirmal Hriday - Mother Teresa's home for the dying destitute, and the Kalighat Police Station.

In front of the Missionaries of Charity home runs the street called Kalighat Road, and about 500 meters from the temple, there is small lane - hardly four feet wide. Waste water runs from the middle of the lane, barely leaving space for a person to walk. The sides of the lane are occupied by chulhas outside the mud houses and the air smells of alcohol. At the entrance to the lane, one sees a group of woman - ranging from age 13-45, all dressed up, wearing bright red lipsticks, their hair neatly tied, with sindoor between the parting of the hair, stand in anticipation of 'clients'. This is 162, Kalighat Road - the oldest red-light area of Kolkata. 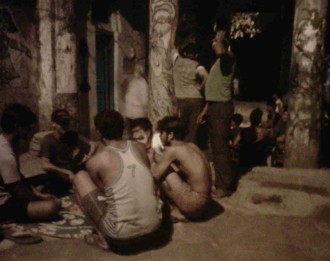 In the evening, one can easily spot the men playing cards and gambling, dead drunk. Ironically, hardly any woman blames her husband for forcing her into this.

•  Not just a matter of choice
•  Yours or mine, either is fine

Almost 1000 sex-workers work here to earn a living. They live in homes which house a half-bed (most of the time a wooden board resting on bricks), a small 14' television, a pile of clothes, liquor and sometimes drugs for the clients and a couple of posters of Bollywood film stars on the unpainted walls.

All these years, I believed that the sex trade flourishes because of trafficked women like Soma who are forced into the profession at an early age. After all, no woman would herself voluntarily opt for selling her body. But the reality is shocking. Most of the women that I interviewed had voluntarily opted for 'the line'- as the profession is commonly referred to here. A pan-India survey of 3000 sex workers puts the number at a whooping 71 per cent.

Extreme levels of desperation and helplessness drive hundreds of women to these red-light areas. Mostly, it stems out of two reasons, which are interlinked to a large extent - acute poverty and spineless men leaving their wives and kids (which are not even born in most cases). Rekha - mother of Nisha and Isha, 13 and 11 years old respectively, has been in 'the line' for eight years now. Her husband left her for another woman when Isha was 2 months old. She tried finding work, but was unable to feed herself and her daughters.

In the majority of cases, such women at first looked for work elsewhere in society, before getting into the sex-trade. Some of them even do some other work, moving in and out of the trade occasionally. Fatima Bibi, 20 years old, became pregnant while she was only 14, and her husband left her while she was still carrying her daughter. She worked as domestic help in a flat, where the owner raped her while the family was away - not once but repeatedly. She went to a different place, but everywhere the harassment from the male members of the family continued.

She was promised good work by one of her 'aunts' and brought to Kalighat. "As a single mother, I get the same treatment wherever I go. In a way, this is no different than where I used to work earlier. Just that I get paid here." Fatima supports her mother, father, ailing sister and two kids.

It does not take too much of an analysis or reasoning to see that lack of education and child marriage lie at the root of this vulnerability of women whose husbands leave them. Under extreme poverty and with kids to support, they adopt prostitution, which is an economically viable option to earn a livelihood.

The rules of the game are simple and the language is money. Rs.200-300 per hour, depending upon the age of the girl. The younger, the better. Don't want to use the condom? Shell out an extra 20 or 50. Plus the alcohol is free. If the sex-worker rents a room - about 2000 per month. An extra 500 for the TV. The ones who cannot afford to rent a room follow adhiya - where the house owner waits outside the house and gets half of what the client pays.

However, marital separation and early pregnancy are not the only factors fuelling the system. There is another, more direct force acting in conjunction. Quite often, the husband acts as a pimp - getting clients for his wife (and daughters sometimes). Saroj Balmiki, a woman in early twenties, told me she opted for the trade, without telling her husband, when she and her husband went hungry for 3 days. I later found out that her husband forced her to become a sex worker and till date, gets clients for her.

Another person around the corner, Bipul, who made his wife get into the line, has already started to look for clients for his daughter who is ten, and sexually abused her to welcome her in the trade. In the evening, one can easily spot these 'hard-working' and 'helpless' men playing cards and gambling, dead drunk. Ironically, hardly any woman blames her husband for forcing her into this. "Ki korbe je? Chesta korbe tarpore kaaj milbo naa" ("What can he do? He tries but he cannot get work"), they tell you.

As for the future - almost all of them have resigned to their fate. The only hope in their lives is their children - whom they want to keep away from this and raise them as respectable citizens. "I refuse to recognise my customers when my son Sudipto comes home", Soma remarks. Rekha's eyes sparkle on the mention of her daughters. She tries to explain, as if it is a simple arithmetic equation, "See, I have ruined my life, so I don't have anything to look forward to. But I want my daughters to lead a respectable life."

Ruchi Choudhary is a freelancer based in Kolkata. The names of some characters in this article have been changed to protect their privacy.

URL for this article
http://indiatogether.org/wbpro-society