COMMUNITY RADIO POLICY
Between the cup and the lip

The Government of India's draft community radio policy proposes to allow NGOs and other non-profit organisations to run low power radio stations with limited advertising. The policy is expected to go to the Cabinet for approval soon, but CR advocates and broadcasters are keeping their fingers crossed, notes Surekha Sule.

Will it? Will it not? For over a decade, community radio activists have been asking for an even-handed licensing policy and only witnessing 'now protract - now retract' types of official responses. Now, once again, they are sitting up with fervent aspiration after a Group of Ministers (GoM) cleared a draft Community Radio policy drawn up last year by the Information & Broadcasting (I&B) Ministry. The draft policy proposes to allow NGOs and other non-profit organisations to run low power radio stations with limited advertising.

All eyes are now at the Union Cabinet for its nod. By many accounts, including highly placed sources at the I&B Ministry, this may depend on the pulls and pushes exerted by Sharad Pawar, Union Minister for Agriculture, in favour of the policy and Dayanidhi Maran, the Union Minister for Communications and Information Technology*, against it.

A network of around 30-plus community broadcasters, programmers and enthusiasts, who have recently banded together informally as the 'Community Radio Forum', has been lobbying the government for opening up the airwaves to the communities. They have been asking the government to follow, in letter and spirit, the landmark Supreme Court judgment in 1995 which declared that the "airwaves are public property, to be used for public good". However, the 'airwaves as public property' are being amply offered to corporate houses only, to set up FM radio stations and as can be witnessed, this sector is on a heavy expansion mode. In 2002, the government did open up broadcasting a little bit and that was only to 'well-established educational institutions'. They were allowed to set up campus-based radio stations, while community based organisations still remained deprived of their right conferred by the SC judgment. 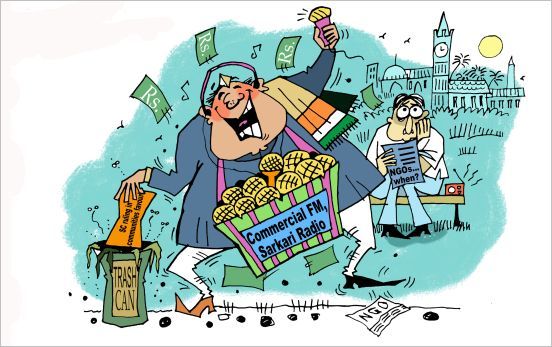 Earlier false alarms from New Delhi had led to high expectations of NGOs getting licenses, and a number organisations had commenced programming years back. The Deccan Development Society (DDS), in Pastapur, Andhra Pradesh, had already built* a community radio station, but it has never been used for broadcasting. Instead, dalit and illiterate/semi-literate women have been covering their own socio-economic-cultural issues relevant to their day-to-day existence through programmes, distributed via audio cassettes. Other NGOs and communities have been involved with broadcasting programmes over All India Radio. Mentionable CR initiatives are 'Namma Dhwani' in Karnataka, 'Radio Ujjas' in Kutch, Gujarat etc. But the endless wait for the licenses to broadcast programmes on their stations has made many organisations sceptical about the ultimate favourable outcome.

Despite the proven ability of community radio in meeting any community's needs of communication which the mainstream, city-centric media can never meet, the government has earlier thought it prudent to give disproportionately greater weightage to concerns of security.

It is also no hidden fact that such ghosts were conveniently used by vested interests holding stakes in commercial FM radio firms to scuttle the policy for CR. After proliferating in cities, these companies have their eyes on rural FM stations. Obviously, if the communities are allowed to run their own radio stations at no-profit-no-loss and allowed some funding through advertisements, local advertisers could turn to them. Commercial FM radio firms are concerned they will not be able to compete with their ad rates. The most contentious issue for CR policy debate has been advertisement on CR, says Professor Sanjay B P, S N School of Communication, Hyderabad Central University.

"The contentious issue of advertising on community radio was perhaps anathema to prospective cross media linked owners as it would theoretically cut into their pie of local advertising, the basis of their support," says Sanjay. He alleges that the reluctance with which the ministry announced the so-called community radio policy nee campus radio policy in 2002 (for educational institutions only) was linked to the hidden pressures of the commercial radio lobby. "A tame policy with umpteen restrictions and complete exclusion of civil society ownership and management brought little cheer," he says.

In May 2004, the I&B Ministry, in consultation with civil society representatives, had drawn up a set of recommendations for opening up policy to real community radio. Still nothing happened. In August 2005 the Community Radio Forum petitioned the Prime Minister Manmohan Singh (See: www.petitiononline.com/comradio). They asked the PM to put an end to the prevailing discriminatory broadcast policy where corporate houses could buy FM station licenses but communities could not own and operate their own stations and were left with no other choice but to buy air-time from existing All India Radio stations. Members of the forum had collected over 50,000 signatures on this petition.

Finally, on 6 October last year, the draft CR Policy was submitted for Cabinet approval but FM lobbyists succeeded in getting some members of the Cabinet to express reservations about the proposal to allow limited advertising on community radio stations. So the matter was referred to the Group of Ministers including Sharad Pawar and Dayanidhi Maran that month itself. Nearly a year later, towards end of September 2006, the Group of Ministers (GoM) cleared the draft policy including the contentious issue of allowing advertisements on such radio stations. If approved unchanged by the Cabinet, the new policy will allow NGOs and other not-for-profit organisations to apply for CR licenses.

The murmur in official corridors has been that Maran-linked corporate groups are currently setting up 45* commercial FM stations and hence he is against the clause about advertisements for CR. However, Sharad Pawar, who is keen to get the benefits to Krishi Vigyan Kendra (KVK) and the Agricultural Universities for running community radios for farmers, has put his foot down and not allowed a skeptical Maran to scuttle the recommendations one more time in the GoM.

Within next few weeks, it is expected that the draft policy will be submitted to the Union Cabinet for approval and notification. CR advocates are hoping that this time around, the airwaves will finally be opened up. If the policy is not scuttled, "the struggle to democratise India's airwaves will finally reach a triumphant conclusion," says K Stalin, co-Founder and Director of the Ahmedabad-based Drishti-Media, Arts & Human Rights, in a statement issued on behalf of the Community Radio Forum. But members are keeping their fingers crossed. Stalin says that the forum continues to be apprehensive about a possible last-minute attempt by commercial and political interests to either water down the draft policy - or prevent its notification.

Surekha Sule is a freelance journalist and an environmentalist from Mumbai. She is currently a Senior Fellow at National Institute of Rural Development (NIRD), Hyderabad.

URL for this article
http://indiatogether.org/crpolicy-media