In a society where children are never consulted, parents in an Andhra Pradesh district are looking at their children with new respect. Village children, determined to transform their communities, are writing and producing a Telugu community radio programme, 'Allari Muchchatlu'. Komilla Raote reports.
21 August 2006 -

, WFS - Every Sunday, from 8.30 am to 9.30 am, in villages across Nizamabad district of Andhra Pradesh, radios and transistors are set to AIR's FM station. Most families gather in the village centre to listen to the Telugu community radio programme, 'Allari Muchchatlu', which is written and produced by village children.

The programme name was chosen by the children, and means 'mischievous chatter'. The programme has jokes, songs, skits and talks on historical figures, but everyone's favourite segment is the success stories told by children who are determined to transform their communities.

"We never thought of the village, only about ourselves. Now we want to be proud of our village."

•  Voices of the marginalised
•  Media with a message

Most of the children are from Dalit families, all members of the Balaseva Sanghas (children's groups) set up by the local NGO Samskar in 76 villages, in the five mandals of Nizamabad district. "The community radio project was sponsored by Samskar and Plan International (an INGO), as a positive social action programme for children," says Project Director K H S S Sundar. Now non-Dalit children are eager to join in the sangha activities, and their parents don't mind, either. Shaken up by the allari muchchatlu of children, village after village has taken up self-help projects: to make toilets in homes; to plant trees and stop cutting trees for firewood; and to delay the marriage of daughters until they are 18.

Take the children of Chikarpally village, who witnessed a villager die of stomach cancer caused by gutka (locally manufactured tobacco product). Mehboob, 14, says: "We protested in front of shops selling gutka, organised rallies and burned packets. We wrote 6,000 letters against gutka to the President, the Prime Minister, the Chief Minister and the District Collector. They did not write back to us, but the radio people showed interest. Never mind, we will send another 200 letters."

The Andhra Pradesh government banned the sale of gutka in 2002. "When the ban was lifted [by the Supreme Court two years later], the sarpanch told the shopkeeper to shift his shop outside the village. The shopkeeper still does not dare sell gutka openly, but under the counter," says Mehboob. 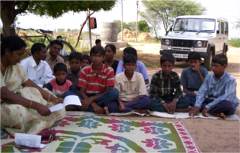 In a society where children are never consulted, mothers and fathers are looking at their children with new respect. Mothers say, "Sunday to Sunday we listen to the programme"; "These children are not working only for themselves but for others too. We never thought of the village, only about ourselves. Now we want to be proud of our village"; "Children are an important part of our village."

Farm labourer Ramulu of Ghazapur village says: "Now we are listening not only to our children, but to the children of other villages, too. They are doing what is good for us." Uneducated himself, Ramulu is determined to educate his five children. During holidays, his children work in the fields and earn Rs.40 a day, like their mother. "Earlier, we would have married off Sujata (his young daughter) by now," he says. "Now we realise how her life will be affected if she marries before she is physically and mentally mature. Childhood marriages also lead to divorces and second marriages. There are fewer second marriages in our village now."

Allari Muchchatlu began when a child asked, "Don't we have a right to be heard in our village? We also have something to say." Started in 2000 with the participation of nearly 300 children in 68 of the 76 villages, the programme is entirely the work of children.

The children meet in their village community room to plan a radio episode, discussing the content, who will do what, and what campaign initiative to take up. Typically, each programmes include two or three songs - no film songs, but folk or their own compositions. The skits are on what the children perceive as a "big" problem in the village: child marriage, child labour, consumption of gutka and arrack, gambling, illiteracy.

When all the written contributions are in, one child neatly writes out the one-hour script, and sends it to the Samskar field office in Varni. V Shanti Prabodha, Samskar Sponsorship Manager, reads each script, weeding out a couple of "inappropriate" words, and decides which one will be aired next. She tries to make sure that each village Sangha gets a chance. Then the children meet to record the programme, usually in their village community room, on a simple pocket tape-recorder.

"Samskar bought the recorders, the AIR people gave us audio cassettes - we convert them to CDs," says Shanti. "Samskar staff were trained to use Sound Forge. We send the CDs to the AIR people." (Sound Forge is a software to record, analyse, and edit audio recordings.) At the AIR station, communications engineer P Sampath Kumar cleans the background noise on the CDs. The title song, also called Allari Muchchatlu, was recorded by children at the AIR studio, says the Programme Executive Bal Rajyasekhar.

The AIR staff is supportive and enthusiastic, and they get plenty of feedback on the programme. Since the FM range is only 65 kilometres, there are demands from other districts for recordings of Allari Muchchatlu for children in their villages. Given the popularity of the programme, last year AIR gave training in voice modulation, speaking and reading to the children.

What are the children planning for their next campaign in Chikerpally? "A campaign against people who say 'I am god' but actually cheat people." (Women's Feature Service)