FTII UPROAR
The sorry plight of a modern-day Yudhisthira

The politically motivated appointment of a hardly-known personality to the post of chairperson at the prestigious Film and Television Institute of India has predictably created outrage amongst students and the artist fraternity. Shoma Chatterji looks at the real arguments behind the ongoing debate.

The Information & Broadcasting (I&B) Ministry’s move to appoint BJP member and actor Gajendra Chauhan – who is primarily recognised for having played the role of Yudhishthir in the television series Mahabharat – as president of the Film and Television Institute of India (FTII) and chairman of its governing council has kicked up a storm that does not seem to subside.  Sustained protests by the student community against the new chairperson’s appointment have led to greater unrest and virtual closure of the Institute.

Given that each of them is, today, an internationally renowned craftsman or artist from Indian cinema, FTII achievements cannot be brushed under the carpet, controversies and protests notwithstanding. A lot of work has been done and graduates have consistently shown that the training received at FTII has stood them in good stead.

The FTII is an autonomous body under the Ministry of Information and Broadcasting of the Government of India. Its policies are determined by a Governing Council. The Appointment Committee of Cabinet (ACC) of the Government of India appoints the Director of the Institute. But when an appointment is so blatantly politically hued – placing at the helm of such an august institution a person with clear ties to the ruling power at the centre but with a sketchy career at best in television and in films – the FTII is stripped of its autonomy in a manner of speaking.

Ironically, this political interference from a central Ministry stands in complete contrast with the earlier government’s attempt to hand over the FTII to private parties, a move that had also attracted a fair share of criticism and unrest. In 2010, the I&B Ministry and the administration made a strong attempt to transform the structure and functioning of the Institute by privatising it completely.

In 2010, a draft report prepared by Hewitt Associates, Gurgaon stated that changes are necessary for the “upgradation of the FTII to international standards.” It was a thinly veiled allusion to the planned withdrawal of the government’s stake in FTII. The report recommended that the FTII be remodelled along the lines of a Public Private Partnership (PPP) venture, strongly advocating the launch of a number of exorbitantly priced, “industry-oriented”, short term courses to make the institute profit generating. This, however, was perceived to be antithetical to the very vision of the Institute. 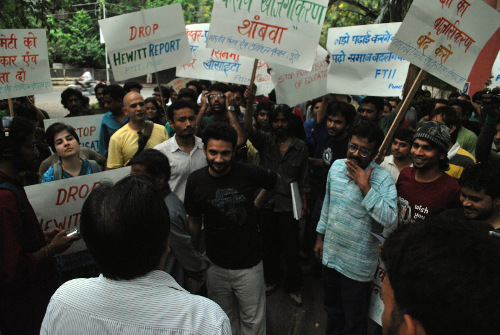 It was largely believed that a policy level shift turning FTII into a profit-making business venture from a national centre of higher learning would lead to a steady decline in the quality of education and erosion in the academic ambience of the institute. This would eventually erode the values of excellence that it stands for.

“We feel such a policy will make the FTII exclusive and homogeneous, catering only to those who can afford the high fees. People will be ‘trained’ for the job market instead of creating organic professionals who view cinema not just as a craft, but also as an art form,” said Samarth Dixit, then- President, Students’ Association, FTII.

Though the authorities were less than attentive to the students’ concerns, the continuous support of alumni, filmmakers, artistes, academicians and scholars who strongly resisted this approach towards the FTII stalled the PPP. At that time, late author and littérateur U.R. Anantamurthy was Chairperson of the Institute.

Five years on, the students of the FTII are once again up in protest against the appointment of a politically-backed figure as Chairman and Director. Chauhan’s appointment was officially made on 9 June and the agitation continues unabated to this date, with solid support from other Universities and Institutes such as the SRFTI (Satyajit Ray Film and Television Institute), Jadavpur University and JNU, Delhi.

Filmmakers and technicians, who have either passed out of FTII or are eminent in their own fields, have also lent their voices of support. The JNU Students’ Union (JNUSU), for example, released a recent statement in support of the student body at FTII, claiming that the appointment was a part of a continuous attempt to meddle with institutions and to saffronise them. The cultural organisation SAHMAT too has said that it is “disturbed” by developments in the FTII.

Harishankar Nachimuthu, the current President of the Students’ Association at FTII, in a memorandum dated 13 June, 2015 writes:

“When the Finance Minister (who also happens to be the current I&B Minister) said that FTII will be made into an “Institute of National Importance,” students hoped that concrete and substantial measures would be taken to grant more autonomy to the Institute and upgrade the academic and physical infrastructure. The first step in that direction would have been to appoint a Chairman of highest artistic attitude, one whose values are in sync with the vision and ethos of the Institute. Instead, bypassing all academic and institute requirements, the Ministry has appointed Mr Gajendra Chauhan, who lacks academic, administrative and artistic credentials in the field of Art and Film Education. He has no significant contribution or work to qualify even as a footnote or a passing reference in the history of Indian cinema and television.” 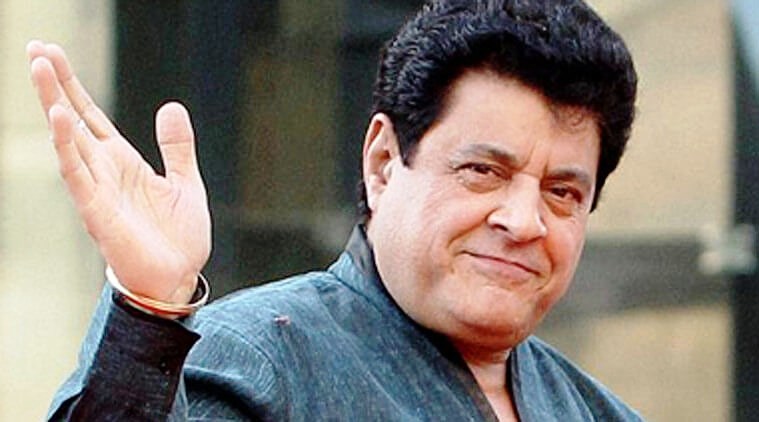 Nachinuthu backs his argument by stating the names of earlier stalwarts who have graced the position of Chairperson. Some of the names are Girish Karnad, Mrinal Sen, Adoor Gopalakrishnan, Shyam Benegal, U.R. Ananthamurthy, Saeed Akhtar Mirza and many more. Placed alongside these eminent personalities, who have excelled beyond any doubt in their respective fields of cinema and art, the name of Gajendra Chauhan does appear an inexplicable aberration.

Nachimuthu’s letter adds “This decision of the ministry to appoint Mr. Chauhan is not only undesired but also brings the whole process of appointment into question.”  One can see his point, given that the his eminent predecessors have never been associated with any particular political group or identity. Why then why should the appointment suddenly acquire a political colour? This has become the moot point of the current controversy and the protest.

However, while acknowledging the reasons behind the ongoing protests, one must also remember that the FTII has not really been able to deliver quality filmmakers and technicians in recent times. This is not because talent is no longer coming in to the Institute, but because the teaching faculty has more external teachers than full-timers.

The external faculty appointed on short-term, contractual basis adds up to 22 teachers teaching in different departments. Contractual faculty cannot devote the space and commitment towards students in the same way that a full-time faculty residing on the premises or in Pune can. The full-time faculty for films stands at 13 presently and for television, the number is a meagre ten.

Under the head “Administrative Structure,” the website of the Institute states very clearly that “The FTII Society is headed by a President who is a well-known personality from film and television, arts or academics.” But the names of the members of the Governing Council are missing entirely. Does this mean that the website has not been updated or does it signify that the Governing Council does not exist? Either way, the omission spells a rather casual approach to the running of the institution.

One, however, cannot quite envy his position at the moment. Whatever his qualifications, or the lack of it, he sits on that chair squeamishly, afraid to be toppled any minute by the students who do not want him in the campus at all, much less on that chair. He is in no position to refuse the post as it is predetermined by the dictates of political powers that be. Never in the past has he been associated with the Institute in any capacity whatsoever, either as student or as faculty or a visiting faculty.

On the other hand, his association with the BJP goes back 20 years, though he officially became a member of the party in 2004. He also campaigned extensively for the party in Haryana during the Lok Sabha and Assembly elections last year.

What will his work-profile and contributions be, now that he has been taken out of direct action on the political field and placed in a position he knows almost nothing about? Chairing an institute such as the FTII cannot be studied from books or learnt at universities. It comes from experience within the domain at large and this is what he does not have. One really does not know what to expect from this modern-day Yudhishthira, who finds himself tragically trapped between the powers-that-be and the real demands of a very critical and prestigious role.

URL for this article
http://indiatogether.org/ftii-uproar-media