A drama on campus

Will the FTII, which once encouraged plurality of cinema, be reduced to providing skilled labour for an assembly line production system of films? Students and alumni are worried. Shoma Chatterji reports.
25 November 2010 -

Over the 50 years since its inception in 1961, the Film and Television Institute of India, Pune, has thrown up some of the best talents in Indian cinema. From Adoor Gopalakrishnan to Girish Kasavaralli, from Mani Kaul to David Dhawan, from Govind Nihalani to Kumar Shahani, fine creative artists have studied and trained at FTII, obtaining international recognition. Along with the National Film Archives of India (NFAI), the Films Division and the National Film Development Corporation (NFDC), the FTII has played a crucial role in the creation, preservation and propagation of our cross cultural heritage through the medium of Cinema.

With the stated vision of promoting plural cinema and the financial backing of the central Government, FTII has attracted students from various socio-economic and cultural backgrounds, thus ensuring a contextual richness and plurality reflected in their professional work. It has been a free space for the creative and aesthetic exploration of the art of film making.

And with their continued contribution to mainstream and regional cinema, the alumni of the Institute have ensured that FTII is recognised as a national centre for film education and practice. More than fostering these creative directors, FTII has also achieved much on the technical dimensions of cinema. It has brought out the best in cinematographers, sound designers, editors, actors and actresses who have done both the film industry and their educational alma mater proud.

All this however, might be relegated to the archive of human memory and to the history of good cinema. A concerted attempt by the Ministry of Information and Broadcasting and the administration to transform the structure and functioning of the Institute is threatening the vision of FTII as a centre of academic excellence. The policy level shift - of seeing FTII as a business venture rather than as a national centre of higher learning - has resulted in a steady qualitative depletion. This has led to an erosion of the academic ambience and values the FTII was once known for.

The quality of instruction and administration has been an issue with the students for the last several years. Despite drawing the attention of the administration to lack of basic infrastructure and resources repeatedly, students complain that nothing beyond some lip service ad hoc measures have been taken. Also, following the national trend, continuous pressure has been mounted to make the institute a profit-generating one, and the government has, on more than one occasion, shown its intent to withdraw support from the running of the institute.

The FTII has been increasing its student intake by 25 per cent each year. But the student organisation claims that the infrastructure and facilities have not expanded to accommodate this increased intake. Currently, the FTII has five batches (300 students) on campus. But only 200 students can be accommodated in its hostels; the remainder must find accommodation outside. "This is not only very expensive but also inconvenient because this is a residential course that consists of night classes for training in night-time cinematography and so on," says the Students Association Cultural Secretary Ajayan Adat.

The quality of instruction and administration has been an issue with the students for the last several years.

"As if all this is not enough, in addition to the four core courses the FTII runs, it has introduced eight self-financing courses in very elementary teaching of some subjects. For example, a student who joins a self-financed acting course must shell out Rs.3 lakhs," says Adat, suggesting that it's a lot of money for students to shell out for courses whose profiles are not high enough to ensure jobs at the end.

The issue of autonomy too comes up repeatedly. "This was supposed to be an autonomous body. But where is the autonomy where the institute is headed by an IAS officer who is not in the least familiar with the logistics of a film institute? When the autonomy exists only on paper, how can the Ministry wish to back out of responsibility and management? Do they wish to have their cake and eat it too?" Adat asks.

Problems have also escalated around the report of a private consultancy, Hewitt Associates, commissioned in response to student demands on various fronts. The draft report defines its purpose as an "upgradation of the FTII to international standards." In line with the Government's agenda for the FTII, this draft report (a) strongly recommended the launching of a number of industry-oriented short-term courses to make the institute profit-generating, and (b) clearly lays out a blue print ensuring that in course of time, the Government can withdraw all financial support from the institute.

These steps would effectively result in the privatisation of the FTII; indeed, a press report published by a PTI source mentioned the FTII is being re-modelled as a Public Private Partnership (PPP).

While this may make the institution profitable, it will also make the FTII exclusive and homogeneous, catering only to those who can afford the high fees as recommended in the draft report. People will be 'trained' for the job market. Alumni and others worry that the FTII will no longer be able to produce organic professionals looking at cinema not just as a craft, but also as an art form. Students, with the continuous support of the alumni, filmmakers, artistes, academicians and scholars have been resisting this mindset of the ministry towards FTII, but say "the authorities are continually bypassing our concerns."

The student body sums up saying that "This fundamental alteration in the moral fabric of the institute will, we fear, mark the end of FTII and what it has stood for. It seems ironical that this is being pushed through at a time when the Deputy Chairman of the Planning commission, Mr.Montek Singh Ahluwalia himself has admitted that PPPs have not delivered much in the Health and Education sectors. Despite this, the Government is bent on shying away from its commitment to education. In fact, it is seeking to privatize most educational institutes and is withdrawing financial support from them. The crisis faced by FTII is symptomatic of the onslaught on higher education throughout the country." 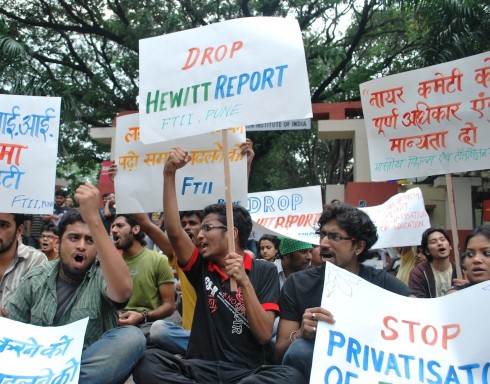 With the criticism mounting, the Governing Council was forced to sit up and take notice. In a press release dated 19 November, the student body reported that an emergency Governing Council (GC) meeting had unanimously rejected the Hewitt report. It announced an alternate group of experts headed by P K Nair, founder of NFAI, would re-examine things to ensure "revitalising and upgrading FTII". U R Ananthamurthy, Chairman of FTII, has this to say, "We have found the report inadequate and decided to terminate it. Our purpose is not to commercialise the Institute but to provide inclusive education to students. A detailed report will be prepared by a new team of experts in three months."

Besides Nair, the group includes Kundan Shah, Chandita Mukherjee, Shaji Karun, Nachiket Patwardhan, one faculty representative (to be appointed), staff representative K Jagdeeswaran, and Samarth Dixit, President of the Students Association. This core group, on its part, has co-opted a few others - Saeed Mirza, Shama Zaidi, Jabeen Merchant, and Hansa Thapliyal. The Governing Council has also promised that concerns about the Planning Commission's plan of a 'revenue generating' Institute will be communicated to the I&B Ministry, and added that a new batch of students would not be admitted until adequate infrastructure is added.

Students, however, remain sceptical that this will amount to much. Their fears were stoked when the Joint Secretary, Films (D P Reddy) refused to address the students and clarify the I&B Ministry's stand on its vision for FTII. He also declined to answer questions related to the allocation of FTII land to a proposed Gaming Institute with private interests. When students raised this issue in the Governing Council meeting, they were asked to leave, along with the official minute taker.

The Council also did not give the new group the stature of a formal 'Committee', which the students believe is a ruse to reject whatever this group might recommend. "We are glad that the Chairman has supported our demands and the Hewitt report has been rejected. However, we are still apprehensive that the decisions taken here will not be approved by the Ministry in Delhi, and they will continue to push their policy of privatisation," said Samarth Dixit.

For now, the danger remains - that an art school which once encouraged plurality of cinema will be reduced to providing skilled labour for an assembly line production system of films.