ALCOHOLISM AND PROHIBITION
No liquor, no drinking?
The recent decision of the Kerala government to phase out sale of liquor and become a dry state has renewed the debate on prohibition as an effective deterrent. Pushpa Achanta examines trends in alcoholism and de-addiction to show why it may be all for nothing.
23 September 2014 -

“My name is Kim. And I am an alcoholic”. This is the well-known refrain introduced as part of a campaign by Alcoholics Anonymous (AA), the decades-old international fellowship of women and men who try to support each other in overcoming alcoholism. It is perhaps the first step towards realising and admitting that one is addicted to alcohol, but intends to control the malaise and be rid of it.

Active in many countries across the world, AA has gained a reputation for its humane and effective approach towards assisting people to get rid of their addiction to drinking alcohol.

India has around 70 million alcohol users (excluding social drinkers) of whom 12 million are alcohol dependent. Alcoholism could lead to around 60 diseases including those of the heart, liver (cirrhosis), brain and also has many adverse social, emotional, psychological, sexual, legal and economic effects on its victims, their families and others connected with them.

According to the report Alcohol Related Harm: Implications for Public Health and Policy in India, drafted by the National Institute of Mental Health and Neurosciences (NIMHANS) in 2011, the National Household Survey states that 27 per cent of male alcohol users complained that they were unable to perform their roles as father/husband or visit family or friends. A Bangalore survey of alcoholics in 2006 showed that alcohol users were higher among those who stayed or ran away from home.

This and other studies have also revealed that alcoholism causes absenteeism, occupational injuries to consumers and others, accidents, suicide, household and societal violence, crime, reduced productivity, job loss, social withdrawal and hangovers.

According to counsellors like Sangeeta Rege of the Centre for Enquiry into Health and Allied Themes (CEHAT, a non-profit organization in Mumbai working on health research and advocacy for disadvantaged groups), who assists survivors of intimate partner violence (IPV) or domestic violence (DV), blaming abuse on alcoholism could trivialise the reasons for IPV or DV.

In a talk on feminist counselling, Sangeeta said, “A drunken man who can reach his home unharmed and also handle personal needs independently, knows himself and his surroundings despite the influence of alcohol. If he then abuses his spouse or partner physically, orally or sexually, he does that deliberately and not because of his inebriated state.”

Importantly, however, according to a study quoted by the NIMHANS report, the total expenses for managing consequences of alcoholism in India for the year 2004 were an estimated Rs 244 billion while the revenues earned from taxes on alcohol were Rs 216 billion.

Rajan, in his 40s, runs PunarJanma, a non-profit organisation in Ramnaragaram (Karnataka) that has a residential programme to help alcoholics with de-addiction. During the programme, participants are not denied alcohol abruptly, but gradually weaned away. Over time, they are encouraged to withdraw completely, aided by medication and counselling

Rajan also offers support and counselling to families and individuals affected by alcoholism. Sharing his own story, he says, “In spite of my inordinate consumption of alcohol, my wife was patient and hopeful that I would give it up some day. That made me realise one day that I should be a good husband and father. Her continued faith in me as an individual and my abilities encouraged me. All this inspired me to give up alcohol about thirteen years ago. I owe my life to my wife completely and feel that she can inspire many others better than I can.” 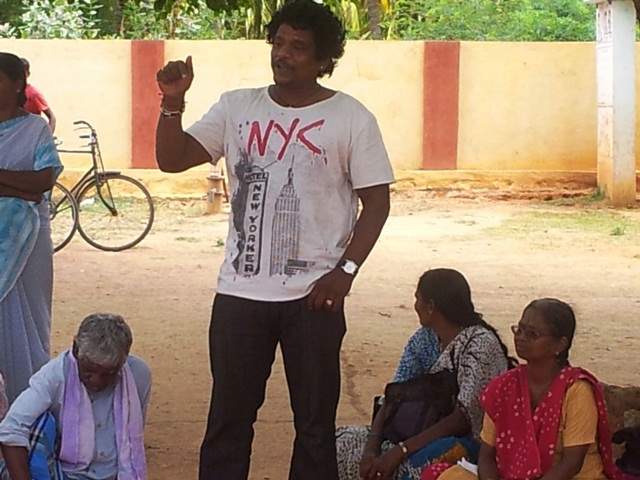 The need to drink

Why do people take to drinking alcohol? In some cases, it starts as ‘social drinking’ where a person consumes alcohol only on specific occasions but gradually loses control over amounts and frequency. Teenaged boys take to alcohol mainly due to peer pressure.

Contrary to perception, girls and women also engage in social drinking and could be alcoholics too. Across the country, there are women who drink irrespective of their socio-economic class. But in some places, taboos against drinking based on gender prevail.

In the villages of Kollegal taluk in Mandya district, socio-economically backward Dalit women almost inevitably suffer the brunt of having alcoholic husbands. In some cases, the women themselves may be consumers of alcohol.

Some women, like Mallamma, not only experience the regressive social stigma of being widows but also of having had husbands who lost their lives to excessive drinking. ”People from my own community stopped talking to me after they learned that my husband Basavaraju was an alcoholic. When he passed away a few years ago, just above 40, following liver damage, some people felt compelled to avoid me as I was considered an ill omen,” she says.

A determined and confident woman, 45-year-old Mallamma runs a small store in their village and also works on their small piece of land so that she need not depend on anyone else. Having studied up to class VII, this skinny lady is aware of her rights and social entitlements. She has a son who is in his early 20s and is employed in a town that is close to their village.

But Basavaraju was not alone in his affliction. Many men from Kollegal taluk are alcohol addicts, but only a few of them are interested in admitting that they need help to rid themselves of such addiction. Krishnappa, 57, a marginal farmer is an exception who has found the will to come out of it. He describes how he was steeped in the habit and how much that affected his life and that of his family. However, the sight of his daughter struggling made him change his mind, much to the delight of his family.

From a different geography and background hails David, a 33-year old construction supervisor in Bangalore. David narrates the story of his personal battle to rid himself of his alcoholism: “I drank so much from morning until night that I was unable to answer the call of nature by myself. The drink would overpower me to the extent that I would be unaware of where I was and what I was doing. As this situation persisted, I began to realise my folly and felt ashamed of myself. That is when I decided to seek the help of Rajan, who is like an older brother to me and guided me to wean myself away from the consumption of liquor.”

Given the incidence of alcoholism in the country, across social classes and contexts, the need to probe the issue of state prohibition, and whether it can reduce this social ill, becomes all the more critical. The debate has received a further shot in the arm with the recent decision of the Kerala government to phase out alcohol availability in the state towards achieving its objective of complete prohibition within 10 years.

Under Article 47 of the Directive Principles of State Policy of the Indian Constitution, states can prohibit intoxicating drinks and drugs that are injurious to health. However, as evident from what happened in Andhra Pradesh during the mid-1990s, prohibition of the sale and distribution of alcohol may not prove to be a sustainable solution. Introduced in 1993, it was lifted in 1997 due to the apparent loss of revenue to the state government. 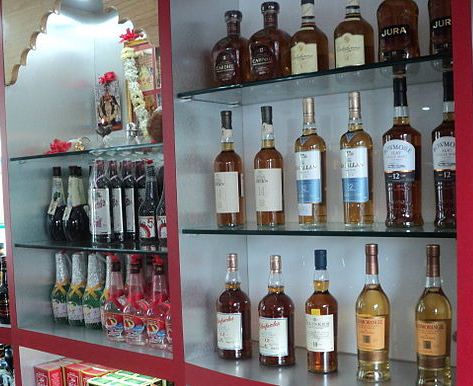 Inside a bar in Kerala. Pic: Rajeshodayanchal/Wikimedia

Nevertheless, the experiment had its positives. “During the struggle for prohibition, women from villages learnt to speak up and collectivise. We may have made mistakes and faced backlash. But women decided to support each other,” says Volga (P Lalitha Kumari), the renowned writer and a committed crusader for gender equality and the liberation of women.

When Women Unite, a powerful documentary feature by Shabnam Virmani on the Andhra Pradesh campaign to bar availability of and access to alcohol especially in rural areas, shows how the women involved built up their movement. They would meet at night to learn to read and write. But they began to share their stories of how their husbands abused them verbally and physically under the influence of alcohol. As this exchange of their personal travails continued, the women decided secretly to act together to rid themselves of the menace of alcohol.

The film portrays how women stormed the places where alcohol was being produced or sold in bulk. It was a co-ordinated effort across many districts which survived opposition. The campaign not only surprised the liquor vendors, but the entire village or community. Neither the local liquor store nor the men could dare to sell or consume alcohol. Their success lifted the confidence of the women giving them immense hope and satisfaction.

Additionally, it raised their societal and household worth, particularly among men. This also compelled the government of Andhra Pradesh to ban the sale of alcohol. However, to their utter disappointment and even distress, the ban was lifted a few years after it was introduced.

The government of Tamil Nadu also uses amended versions of the Prohibition Act introduced in 1937. Since 1983, it has taken over the wholesale distribution of alcohol through the Tamil Nadu State Marketing Corporation (TASMAC). This was after the consumption of illicit and spurious liquor proved fatal in many instances in the state. Arrack, the local version of alcohol (distilled from the palm tree or sugarcane) that is affordable and accessible has also wreaked havoc in the lives of its consumers in separate incidents.

Gujarat, Haryana, Mizoram, Nagaland and a few other states have also implemented prohibition, but with fairly little success. In fact, there seems to have been no significant reduction in the number of alcoholics or even in the consumption of liquor in any of these states, though data available on this subject is contradictory. Of course, local alcoholic brews (such as Zutho in Nagaland) continue to be available in many places.

A survey by the Haryana government in 1997 claimed that liquor consumption had gone down by 67 per cent while an independent study reported that only 8 per cent of more than 900 interviewees considered prohibition successful. The Delhi government announced a plan, a few weeks ago, to levy a transport cess of a rupee or two on every bottle of alcohol sold but it is debatable whether that would bring down the consumption of the fluid.

While prohibition has had, in some cases, a perceived immediate effect in terms of reducing alcohol consumption overall, it has hardly been able to really bring about the intended change in a long term manner. On the other hand, an absolute ban can result in an increase in bootlegging, or the illicit trade of alcohol, as has been happening in Gujarat with the supposed collusion of some police and government personnel.

This has also been observed in the sale and consumption of other banned drugs, narcotics and psychotropic substances. Illicit drug trade is a huge menace in society with strong socio-economic impact. In the absence of withdrawal support, a mere ban on alcohol could also drive addicts to other forms of substance abuse.

What is therefore imperative is the need to create awareness regarding the downside of excess consumption of alcohol and the provision of strong support systems and rehabilitative infrastructure for addicts. That is not something enforced legislation or any other vigilantism can substitute with any degree of success.

(The personal details of individuals featured in this story were changed to safeguard their identity.)

URL for this article
http://indiatogether.org/impact-of-prohibition-on-alcoholism-andhra-kerala-society