How well are securities laws enforced?

An analysis of over 8,000 enforcement orders passed by the Securities and Exchange Board of India over a span of ten years provides insight into the use of its powers by the institution, and its priorities. Devendra Damle and Bhargavi Zaveri Shah summarise their findings.

The Securities and Exchange of Board of India (SEBI) is one of the most powerful regulators in India. As the regulator of one of the world's largest stock markets by market capitalisation, SEBI has a variety of enforcement tools at its disposal. These include the imposition of monetary penalties, license cancellation and pursuing criminal proceedings against violators. The law empowers SEBI to issue directions to intermediaries, and more broadly, to persons associated with the securities market.

Such directions may be of a prohibitory nature, such as restricting companies from raising capital in the public markets, disqualifying persons from acting on the board of publicly traded issuers and restricting access to the capital market altogether. They may also be of a remedial nature such as disgorging illegal gains made by violators or directing restitution to wronged investors. The grounds for issuing such directions are wide.

Unlike some Indian financial sector regulators, SEBI follows a due process before issuing such orders, involving the issuance of a show cause notice and a hearing and publishes each enforcement order passed by its officials systematically on its website. This transparency in enforcement allows us to establish some basic facts on securities laws enforcement in India over a long observation period. In a new paper, we analyse over 8,000 enforcement orders passed by SEBI over a span of ten years to answer some of the questions we mentioned above. In this article, we summarize the key findings of our work.

Between o1 January 2011 and 31 December 2020, SEBI passed 9048 enforcement orders, of which we were able to successfully download and parse 8032 orders. We then analysed these orders, using text-mining software we designed ourselves, to arrive at some summary statistics on the frequency and type of enforcement undertaken by SEBI during the study period. To answer more detailed questions on the nature of enforcement, we manually analysed a stratified random sample of about 10% of these orders. The sample was drawn from the set of orders involving four regulations, which are most frequently enforced by SEBI (as per our data), namely, orders pertaining to fraudulent and unfair trade practices in the Indian securities market (FUTP), violations of the Insider Trading regulations, the Takeover Code and Broker regulations.

As mentioned above, the SEBI Act empowers SEBI to pass two types of orders, namely, orders imposing monetary penalties and orders issuing directions. Such orders can be issued against intermediaries, market participants, issuers of capital or persons generally associated with the securities market. Until 2019, monetary penalty orders could be passed only by adjudication officers and directions would be issued by whole time members of the SEBI board. With effect from 2019, the members of the SEBI board have also been empowered to pass orders imposing monetary penalties.

In addition to these, the law also empowers SEBI to settle violations upon the payment of a settlement fee, without passing a guilty verdict against the violator. Basis this scheme of the SEBI Act, we categorize the enforcement orders in our data set into three categories shown in the Table. On an average, SEBI issues 250 enforcement orders with directions and double the number of orders imposing monetary penalties each year. The SEBI Act also empowers SEBI to initiate criminal prosecution against persons accused of having violated the SEBI Act or the regulations made by it, but we do not take account of this typology of enforcement proceedings in our study.

^ Numbers in brackets are a percentage of the total.
* We estimate that not more than 30 orders may involve a monetary penalty.

As is evident from the Table, securities law enforcement is largely undertaken in India through monetary penalties, but the proportion of enforcement undertaken through non-monetary sanctions is not trivial. Settlements account for less than 10 per cent of the total enforcement orders in our data. The annual distribution of these types of orders is shown in the Figure. The Figure shows that from 2018 onwards, there has been a sharp increase in the intensity of enforcement, with the number of monetary penalty orders nearly doubling from the previous years. The proportion of settlements has also increased over time, particularly after 2016. While the growth in the size of the market, an increase in the intensity of regulation and enforcement capacity are intuitive explanations for this jump, more precise, causal explanations require further research. 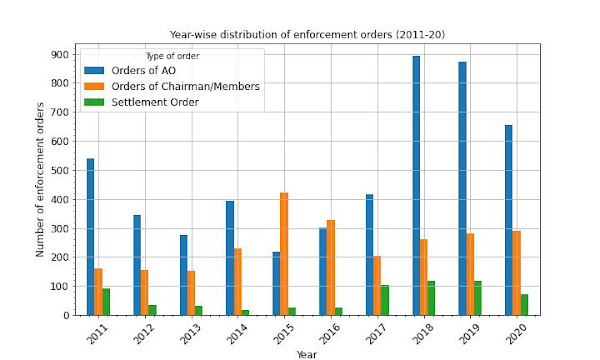 SEBI draws its substantive powers from a set of three laws, over and above the SEBI Act, namely, the Companies Act, 2013 (and its preceding legislation), the Securities Contracts (Regulation) Act,1956 (SCRA) and the Depositories Act, 1996. While the Companies Act largely deals with the incorporation of Indian companies and the governance of their affairs, it also governs primary issuances, the requirements to be met by public offer documents and some aspects of the governance of listed companies. These matters under the Companies Act are administered by SEBI.

The SCRA governs the conceptual definition of securities and securities contracts, regulates some types of securities contracts and governs the licensing and affairs of stock exchanges. The Depositories Act, 1996 deals with the regulation of depositories and depository participants. Under each of these laws, and in particular under the SEBI Act, SEBI has issued regulations defining the registration and reporting requirements for intermediaries, the kinds of misconduct that will elicit penalties, and so on.

We find that orders against fraudulent and unfair trade practices (FUTP) are the single largest group (15 per cent), followed by orders dealing with violations of the provisions of the Companies Act (11 per cent), insider trading regulations (10 per cent) and the takeover code (9 per cent). The enforcement actions (i.e. the number of orders) under the remaining regulations are few, with some of them having witnessed enforcement not more than once during the study period.

To answer more specific questions of these enforcement orders, we manually analysed a random sample of 818 orders (approximately 10 per cent of the total sample) from amongst the orders against the following types of violations: (1) FUTP, (2) insider trading, (3) violations of the takeover code and (4) violations of brokers' regulations. Some findings from this micro-study are summarised below:

Duration of the enforcement proceedings: The formal enforcement process at SEBI begins with the appointment of an investigating authority who investigates the facts and reports her findings to the SEBI board. If the findings are adverse, a show cause notice is issued to the accused by the adjudication officer (where the proposed sanction is a monetary penalty) or a whole-time member of the SEBI board (where the proposed intervention is a direction).

We find that the median time for the issuance of a show cause notice is a little more than three years from the date on which the violation was committed. Further, the median time from the date of issuance of a show cause notice to the date of an order imposing monetary penalties is a year and a half. It is a little more than two years for orders issuing directions. A regulation-wise analysis of the duration suggests no relationship between the complexity of the violation involved and the duration of the enforcement proceeding.

Subject and outcome of enforcement: A bulk of the enforcement actions are in respect of unregulated entities, that is, entities that are not SEBI-licensed intermediaries. This phenomenon could be attributed to the type of violations that are most often enforced against, namely FUTP and insider trading. Both these practices would likely involve traders and market participants that are not SEBI-licensed intermediaries. Further, in nearly 80 per cent of the cases, SEBI found the person(s) guilty of all the violations that they were charged with, with a marginally higher conviction rate for unregulated entities compared to regulated entities.

The conviction rate for violations of the Takeover Code is also marginally higher, compared to violations under the three sets of regulations. It is hard to comment on the optimality of this high conviction rate as these enforcement proceedings are undertaken and decided by SEBI officers themselves. All orders of SEBI, except those rejecting an application for settlement, are appealable to the Securities Appellate Tribunal (SAT). The rate of appeals and the outcome of appeals before the SAT could be a rough proxy to evaluate the optimality of this conviction rate and would be a good direction for further research.

Proportionality of sanction: We find a lot of variation in the amount of penalty levied across cases. While the median (i.e. typical) size of the penalty is in the range of Rs 5,00,000, the average is in the range of Rs. 57,00,000. This difference indicates that while there are few cases where large penalties are issued, the size of these penalties is very large compared to the typically-imposed penalties. One explanation that could account for this variation is the amount involved in the violation. The SEBI Act requires an Adjudicating Officer to take into account, among other factors, the amount of disproportionate gain or unfair advantage made as a result of the default or the amount of loss caused to investors as a result of such default. However, we find that in a vast majority of the cases in our sample (90 per cent), the size of the violation was not calculated.

We similarly find a lot of variation in the orders that impose sanctions other than monetary penalties. Out of 118 such orders, 82 orders restricted the market access of the accused. The duration of such restrictions varied from 15 days to 4 years, and we could not discern any relationship between the duration of the restriction on the one hand and the violation or the purpose of the restriction on the other. Further, courts have repeatedly held that SEBI's direction making powers are remedial and preventive in nature, and not punitive. However, it is unclear at what point an order that operates to restrict market access starts to become punitive in nature, since none of the orders in our data clearly draw the line between remedial and punitive measures.

In India, the field of securities laws is often studied from the perspective of a specific case, individual legislative amendments or specific judgements of courts. While such analysis is useful, a slightly different, more quantitative approach is necessary to gain a systematic understanding of the manner in which the regulator uses the wide variety of enforcement tools available to it, the manner in which it seeks to enforce against different kinds of misconduct and the efficiency of its enforcement functions. The consistent publication of easily accessible enforcement orders by SEBI on its website makes it possible to undertake such systematic research on securities laws enforcement in India. This paper is one such effort to begin developing more systematic knowledge on enforcement of private law in India.

Devendra Damle is an independent researcher. Bhargavi Zaveri Shah is a doctoral candidate at the National University of Singapore. This article was originally published in The Leap Blog, and is republished here with permission.