The Indian Giant Squirrel is an indicator species; its presence suggests a healthy forest. Its numbers are on the decline though, which is why the conservation of IGS needs a holistic approach where the focus is as much on the habitat as on the animals themselves. Sneha Mahale reports.

Its call is hard to miss. A series of high-pitched and staccato chirrups reverberate through the dense forests where it is found. Follow the sound and you might spot the Indian giant squirrel (IGS) on the tall branches of trees in the deciduous, mixed deciduous or moist evergreen forests of India. Its wide distribution within its range explains why the IGS is listed in the Least Concern category of the IUCN Red List.

But things are not going so well for this giant among squirrels. Hunting and loss of habitat due to deforestation and degradation have forced the species to the brink of local extinction in some areas. "The IGS occurs in severely fragmented populations. So, no population-wise data is available. However, studies indicate that its density in south India ranges from 2.37 squirrels/km2 to 12.26 squirrels/km2 depending on the different protected areas," says Dhriti Banerjee, Director, Zoological Survey of India.

Despite its distinct call, coloration and size, the IGS is an elusive species.
Photo by Dhruvaraj S/Flickr.

The IGS has a body length that varies from 254 to 457 mm. The length of its tail is approximately the same as the length of its body. Each squirrel weighs approximately 1.5 to 2 kg. But it's not just its size that is impressive. The mammal can exhibit different colour patterns with shades of black, brown and deep red being the most predominant.

What's also interesting is that the fur of the IGS varies according to where it occurs, and from one individual to another even in the same location. For example, those found in the southernmost parts of India are darker, with a lot of black fur on their backs. The same ones won't be found in Maharashtra. But even in Maharashtra, two individuals at the same site could have different colourings.

The fur of the IGS varies according to where it occurs, and from one individual to another even in the same location.
Photo by Arshad.ka5/Wikimedia Commons.

Life in the air

The IGS is built for life in the trees. It has large, powerful claws that can be used to grip barks and branches. An acrobatic climber, it will often hang by its hindlegs and use its tail for balance while feeding.

Naturally shy and wary, this species rarely descends from the forest canopy. Therefore, it favours habitats with contiguous forest patches, tall trees, and canopy connectivity that protect it from predators and provide an ample supply of food. Yet, despite its high perch, the IGS serves as prey for raptors and sometimes even large carnivores such as leopards and primates.

The giant squirrel is endowed with two front teeth that grow throughout their lives. It primarily feeds on fruits, flowers, seeds, leaves, bark, and occasionally on insects and bird eggs. "The IGS shares a characteristic of rodents: nibbling. It will nibble on tree barks and hard kernels of nuts, which is also a natural mechanism to prevent overgrowth of teeth," says Nivedita Pande, who has recently co-authored a book on the dental management of captive-born IGS.

Role in the ecosystem

The IGS plays a vital role in balancing the forest's ecological systems by aiding in seed dispersal. This helps the forest grow and thrive, thus indirectly supporting the local wildlife population and reducing the human-wildlife conflict to a large extent. It is also an indicator species, and its presence is indicative of a healthy forest.

"It needs dense forest canopy and tall trees to thrive. But while forest cover may have increased as per the Status of Forest Report 2021, the quality of forests has reduced. Dense forests, for example, have become less dense. A disturbed or fragmented forest tends to have an immediate impact on this particular species' numbers," says Anish Andheria, president, Wildlife Conservation Trust, who has worked extensively on the conservation of the IGS in Maharashtra.

Solitary by nature, the IGS is typically seen in pairs only during the breeding season. It usually constructs more than one nest at a time, which is made of leaves and twigs. These nests are built in tall, profusely branched trees mostly along rivers and streams. The female gives birth to multiple young ones, though often only one reaches adulthood.

Being an arboreal species, the IGS needs access to a wide area of trees offering fruits, insects and barks as well as breeding opportunities. Habitat destruction, habitat alteration like fragmentation, the building of roads and laying of power lines, and cutting of old and tall trees have a negative impact on its population. Also, squirrels that do come down to the ground, especially if there is no canopy cover, often become roadkill.

"It is completely forest dependent (unlike palm squirrels which live in modified habitats) and does not tolerate habitat degradation. It is what is causing a decline in their numbers. Poaching, especially in the Eastern Ghats where new human settlements have been built, is also a threat to this species," says Banerjee of ZSI. 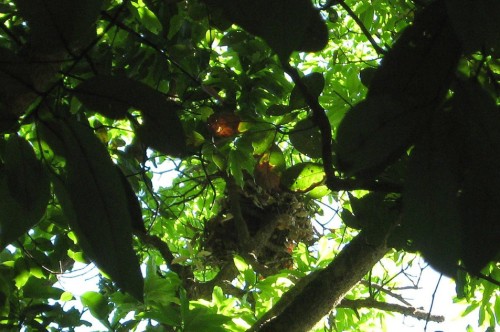 The IGS builds its nests in dense tree canopies and thinning forests could impact the survival of the species.
Photo by Phadke09/Wikimedia Commons.

Another concern is that these giant squirrels are notoriously difficult to breed in captivity. For one, their natural habitat must be replicated as far as possible, and the reclusive animals need to be protected from disturbance.

"The IGS is a very active species. Captive breeding programmes typically have smaller areas as compared to the wilderness, so they may be deleterious to their overall habit of jumping between tall trees. Lack of a complete diet, which it generally feeds on in the wild, also tends to be overlooked in captivity. It, at times, is only presented with soft foods, which is in conflict with its natural behaviour of nibbling. Additionally, high sugar content in a diet that primarily revolves around fruits leads to dental caries – just like in humans," says Pande.

It is why the conservation of IGS needs a holistic approach where the focus is on habitat conservation, identification and protection of specific trees which are preferred by IGS, prevention of habitat fragmentation and reduction of human interference. "Sometimes conservation projects fail because the focus is kept only on the species and not the environment in which the species thrives. The IGS's entire habitat needs to be conserved to encourage free feeding and seasonal movement. Only then will this particular species truly thrive," says Andheria.