Elephants need to eat a lot, but are selective too

A study in northern West Bengal found elephants are selective with their diet, feeding on less than half the species of plants around them. This is contradictory to the prevalent view that elephants are generalist feeders. Nabarun Guha reports.

Asian elephants, despite needing 150 kilograms of wild fodder every day, are picky eaters, suggests a recent study in PLOS One by scientists from the Salim Ali Centre for Ornithology and Natural History (SACON) in Coimbatore. Supported by the Ministry of Environment, Forest and Climate Change, and the Ministry of Science and Technology, the study is said to be the first to assess food selection by elephants in land-use mosaics comprising forests, tea plantations and human settlements.

In the northern districts of West Bengal, the authors witnessed some of the highest numbers of negative human-elephant encounters in Asia. The region sports fragments of moist tropical forests in a mosaic of tea plantations, agricultural land and human settlements and was deemed as an ideal location for the study. "Around 57 per cent of the landscape used by elephants remains outside the Protected Areas thereby underscoring the importance of non-protected areas for movement and connectivity of this sub-population," the authors write about the study area. More than 500 elephants are found sharing space with 700 humans per sq. km. in the study area, says the lead author.

Around 150 kilometres of elephant feeding trails were surveyed to assess forage use, and 123 plots were surveyed to assess the availability of plant species across different land-use types. Footprints, dung piles and body rubbing marks on trees were used to follow the feeding trail. The ratio of forage use to plant species availability was calculated to quantify forage selection.

Elephants were found to be feeding on more than 130 species of plants among the 286 species that were recorded during the study. The study found high selectivity for forage species, contradictory to the current knowledge that elephants are generalist feeders, but the authors reiterate that multi-season studies must be conducted to confirm this. Of the 96 plant species whose selection was assessed, 21 species were found to be the most selected by elephants.

Tree species have been found to dominate the forage intake in tropical dry forests, while non-tree species dominate the diet of the elephants in tropical moist forests. In private lands, species like Musa sp. (banana and plantain species), Areca catechu (a species of palm), and different species of bamboo dominated the diet, the study finds.

Priyanka Das, the lead author of the study, had this to say about the significance of the study in India; "Previously, there were two studies on forage selection of Asian elephants – one in Borneo and the other in Nepal. I didn’t find any study on this topic done in India."

Das completed her fieldwork in northern West Bengal at the beginning of 2020. On the decision to choose this region as the site for her study, she said, "This region is part of the Eastern Himalayan Biodiversity Hotspot. This landscape has a very long history of forest alteration and degradation. Initially, the British came and transformed the forests and then the villages came up. The protected forests are small and the elephants needed a much bigger area to meet their daily requirements of food, water and shelter. Forests are like islands in a sea of tea estates and villages. So, while moving from one patch to another, if they come across crops, they will forage on them, as it is easy food. Addressing the plant species availability was a difficult task for us logistically." 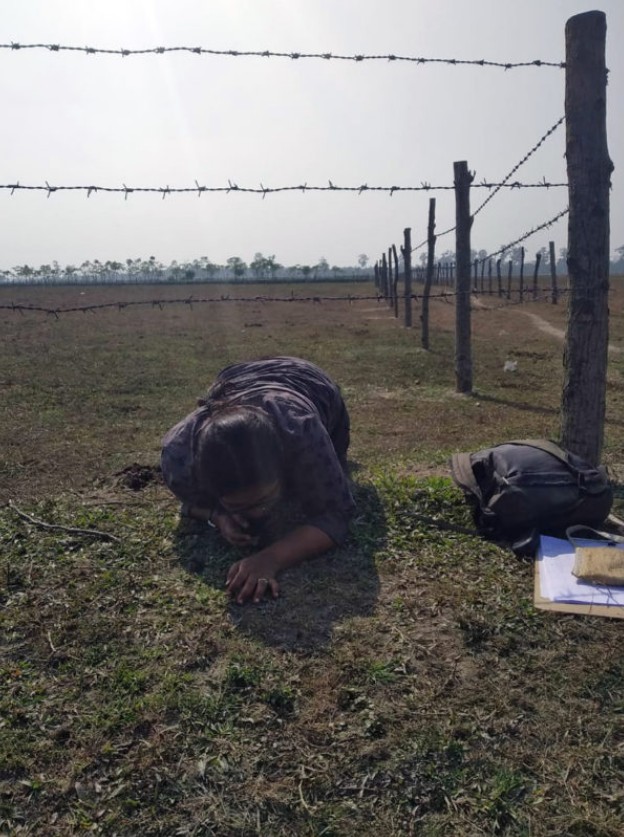 Amir Kumar Chettri, a resident of Chalsa in Jalpaiguri who helped Das in her fieldwork and research, says, "Elephants have been living in this region since before humans. People here know that. We believe that even if elephants destroy our crops, our yield will ultimately be four-five times more than the amount of crop destroyed. Das added, "The Rajbongshis, one of the original settlers of this area, call elephants Mahakal. They don’t even ask for compensation when elephants raid their crops. They believe that they are staying in the land of elephants; the loss of crop is a tax they are paying."

Foraging habits of the elephants

The study observes that elephants make top-down decisions by first selecting landscapes with high foraging opportunities, then patch types within them and finally select the species. Relative forage use and plant species availability ratios were calculated to assess forage selection in a multi-use landscape comprising forests, tea estates, agricultural land and human settlements. As canopies thinned in the habitats observed (from thick to open forest), the density of invasive species thickened, leaving low forage species available for elephants to feed on. Moreover, given that 32 per cent of species preferred by elephants were found in human settlements where human-elephant conflict is highly likely, the study calls for conservation strategies to be revisited and strengthened.

Vegetation along the feeding trail of elephants.
Photo by Priyanka Das.

Although forage use by Asian elephants is well documented, very little is known about forage selection. This study aims to start the conversation about the need for more studies in this discourse.

"Negative interactions between wildlife and people are a result of multiple factors like loss and fragmentation of their (wildlife) habitats," said a senior forest official posted in northern West Bengal on condition of anonymity. "Logically speaking, habitat restoration should definitely have a direct consequence on the number of negative interactions. But when you deal with a species like the Indian elephant, which is so intelligent and adaptable, it is difficult to guess the extent of success of the recommendations unless we implement them in the field and monitor the results over an appreciable period of time."

Das added that she has submitted a proposal to the Forest Department, which they agreed to include in their working plan. "We also recommended stopping planting non-native species, to which they have agreed. They will start the ecological restoration of the Gorumara Wildlife Division, which is a long-term process. I aim to be associated with this initiative."

Since the study was conducted in the dry season, the authors suggest conducting a study for the wet season and also studying the role of elephants in seed dispersal and forest regeneration. As a future recommendation, they also write that understanding the nutritional composition of the foraged species to understand if the elephant population is undergoing nutritional stress, would expand the knowledge in the discourse.