Static in the 3G signal

In May 2010, when licenses for 3G spectrum were awarded through auction by the Government of India, it was decided that in each telecom circle of the country (there are 22 circles in all) three or four private carriers would be allowed to bid for spectrum, and one of the two government carriers - BSNL, by and large, and MTNL in Mumbai and Delhi - would be an additional choice available to customers.

At the end of the auction, BSNL/MTNL, which got spectrum in all circles without having to bid but at bid-determined prices, emerged as the largest 3G operation in the country. The state-run operators were also allowed a headstart of six months over their private competitors in launching their 3G operations. On the other hand, no single private carrier bid for all-India spectrum. The major private telcos - Bharti Airtel, Vodafone Essar, Idea, Aircel, Tata Teleservices, Reliance - ended up with between 9 and 13 circles each, which meant they could not offer pan-India services. 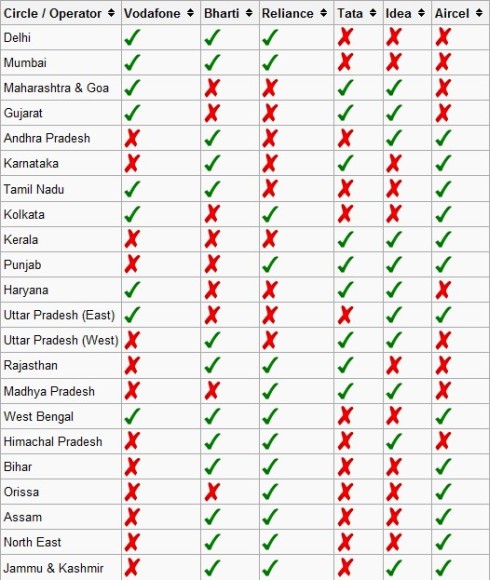 Now, a dispute has broken out between the private telecom operators and BSNL, with the Department of Telecommunications also weighing in favour of the state-run carrier. The reason - private companies are entering into intra-circle roaming agreements with each other, which would allow them to offer 3G services even in circles for which they had not bid and won spectrum, using the facilities of their partners in such agreements. BSNL has objected to this, saying it is a violation of license permit conditions.

Earlier this year, Vodafone, Airtel and Idea announced a series of Intra Circle Roaming Agreements (ICRAs) that allow the three companies to offer pan-India 3G service (Orissa excluded, as none of the three operators hold a 3G license for this circle). Along similar lines, under an agreement with Tata Telesevices, Aircel has begun offering services in Maharashtra, Madhya Pradesh, Haryana, Gujarat, and western UP circles although it does not hold licenses for those circles.

Do these agreements amount to a violation of the 3G license conditions? The answer appears to depend on who is asked.

Those who argue that private telcos are violating license conditions say 'roaming' is a temporary service available to subscribers as they travel between circles, whereas the way the agreements are being used now is quite different. Armed with ICRAs, operators without a local license are providing full service 3G to customers resident within a circle using a 'roaming' agreement with a local license holder. This, says the regulatory body Telecom Regulatory Authority of India (TRAI) amounts to 'spectrum-sharing' or a 'Mobile Virtual Network Operation - a kind of 'reseller' operation that is usually carried on by smaller companies that buy bandwidth from license holders. Spectrum-sharing and MVNOs are both not allowed under the terms of mobile permits.

The Cellular Operators' Association of India represented before the Minister for Telecommunications that ICRAs do not violate the license conditions for 3G services.

The Telecom Enforcement, Resource and Monitoring (TERM) Cell of the Department of Telecommunications (DoT) has also stepped into the middle of the debate with its views. The Cell, which is responsible for ensuring that no one without a license operates telecom service in the country, recently opined that the agreement between Airtel, Idea and Vodafone is illegal, and has asked DoT to take action against them.

TRAI, in its letter to the Secretary, DoT has suggested that license norms are being violated, and companies are offering 3G services in areas where they had not even bid for spectrum. It is also concerned about possible overloading of the limited spectrum available, as operators compete for customers.

State-owned BSNL, which earlier this year failed in its attempt to enter into ICRAs with private companies to use its pan-India spectrum, is anxious that it should not be exposed to more competition than it had planned for, as a result of the new deals between its competitors. But if BSNL now believes that ICRAs violate license terms, then it is not clear how it could have itself proposed to enter into ICRAs with the private telcos earlier (it is another matter that those talks failed).

Private companies, defending themselves, insist they are complying fully with license conditions. The Cellular Operators' Association of India, the lobbying arm of the major GSM telecom players in the private sector recently represented before the Minister for Telecommunications that ICRAs do not violate the license conditions for 3G services. According to a COAI press statement, "The 3G Intra-Circle Roaming is not an infringement of the licence conditions but is well within the ambit of Licence as clarified by DoT at various foras."

All of this raises a basic question, namely, did the Government and the DoT, as well as the private operators not anticipate that operators would get into agreements among themselves to provide pan-India coverage?

The inevitable result of limiting each circle to three or four private carriers was that each of the bidders was forced concentrate its bid of specific circles that it cared the most about. And in the process, they ended up with the rights to provide 3G service only in those circles. That much is clear. What is not clear is whether anyone bothered to ask and answer the question: considering that customers of the telcos travel all over India, would they not want to be online through their 3G service wherever they are, regardless of whether their service provider held a license to offer 3G in that circle?

Private operators reply that this question was asked and answered at the time of bidding itself; the COAI statement alludes to this. The specific questions pertaining to inctra-circle 3G roaming in circles where they do not hold licenses were put before the DoT at the time of the spectrum allocation itself, they say. And the Department had at that time indicated that the kind of roaming agreements they are entering into now would be permitted. Some operators also claimed that they had notified DoT about their ICRAs before signing them, suggesting that the Department had not previously found anything wrong with such agreements.

Whether intra-circle roaming was specifically permitted in the license conditions, therefore, is to be resolved. Meanwhile, the action is hotting up on several fronts. TRAI has served notices on the companies, questioning the legality of their 3G intra-circle roaming agreemnts. The Central Vigilance Commission has also sought the DoT's opinion on the matter. And inevitably, there is also a legal element, with a Public Interest Litigation now brought before the Supreme Court seeking its intervention in the matter.