Going awry with the flow

For the third time in less than a decade, the dams that irrigate much of north-west India have been depleted to critical levels, as their management stumbles without clear policy directions. Himanshu Thakkar reports.
06 July 2012 -

The precariously low water levels at dams managed by the Bhakra Beas Management Board (BBMB; the Bhakra dam on Sutlej River, Pong dam on Beas River and Thein dam on Ravi River) has led the Board to declare that if there are no rains soon, an urgent meeting of several states will have to be called to consider emergency measures.

The signs have been building up for sometime now. Summer in north-west India has already been rather long, hot and dry, and the monsoon has been showing all the signs of being deficient this year. The India Meteorological Department has also said that north-west India may have the worst deficit of all regions of India during this season's rains. But it seems BBMB did not read these early signals early enough, or well enough. Instead, it did not take measures to build up the reservoirs to levels that it could have had, and subsequently allowed them to deplete faster than usual. As a result, we now face a situation that could well have been avoided.

Data from the reservoirs

All these reservoirs are on snow-fed rivers, so it should not be surprising to find substantial water storage in these dams at the beginning of the monsoon. Also, rainfall in the catchments of these dams last monsoon was above normal and the reservoirs were almost full at the end of monsoon, say early October 2011. So the lower water levels today are not due to any deficit in last year's monsoon. 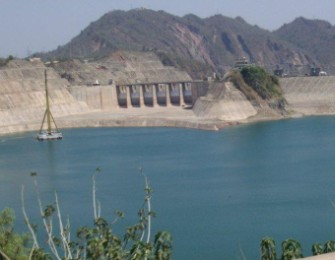 The inflow into the reservoirs was lower this year than last year, but the BBMB didn't adjust the release of water from its dams to adjust for this reduced inflow. (Picture: The Thein dam, one of the BBMB managed projects).

Why? In these months of February and March, the residual rabi crop irrigation should not have been much higher than last year. And post rabi, in summer season, irrigation should anyway be discouraged and dis-incentivised. Punjab and Haryana has actually passed laws that say that before June 10 and 15 respectively, no paddy transplantation should be allowed.

This depletion is further corroborated when we look at the water release figures from the Bhakra and Pong dams, available on the BBMB's web site. We find that the average water releases from both the dams in the January-March period this year were unprecedented: the highest in the last 13 years for which the figures are available online. In the case of Pong dam, the average release even during April-May this year was higher than the figures for the last two years. Clearly, there was extra-ordinary water depletion in the dams in Feb and March and even beyond this year in these reservoirs.

Why? Only BBMB officials can help unravel this, but there is no doubt that very high levels of discharge from the dams took place throughout the first half of this year.

But the BBMB didn't adjust the release of water from its dams while the inflow decreased. At the BBMB-managed dams themselves, the power generated during the same six months this year was only 1.5 per cent below that in the last year. The BBMB was releasing more water, even while its inflows were about 20 per cent lower than that in the last year.

By early April this year, the water levels in all three BBMB reservoirs had significantly depleted. However, after early April, when irrigation releases should have been very low and when these reservoirs continue to get significant inflows due to snow melt, there was a chance for BBMB to increase the water levels in the reservoirs. However, the BBMB did not do this. On the contrary, the level at Bhakra further reduced from 25 per cent of live storage capacity in early April to 16 per cent by June 27. In this period, BBMB continued to produce power at roughly the same levels as last year, rather than hold the water.

There is certainly a balance to be maintained between power production and water storage, but as the BBMB approaches what it calls an emergency situation, it bears asking whether it was prudent enough in drawing this fine line.

There are a number of good reasons why the BBMB should have prioritised water storage. A number of official monsoon forecasts were available in April 2012 itself, which said that monsoon in north-west India is likely to be below the long-term normal level. For example, the South Asia Climate Outlook Forum conference (in which IMD and the Indian Institute of Tropical Meteorology also participated in April) suggested that the probability of north-west India getting below-normal rainfall was 40 per cent, which was the highest for below normal rainfall forecast among all the areas.

Seeing this, BBMB should have immediately adjusted its reservoir operation and started building water storage in its reservoirs, which were already very low. But it did not do so, and instead allowed higher outflows than there were inflows (as is apparent from its power generation figures), thus further depleting the reservoir levels.

The likely consequence of this is that farmers and people throughout north-west India will suffer due to the unresponsive reservoir operation by the BBMB - quite similar to what happened in 2004 and 2009. Had BBMB's reservoir operation been more responsive to the developing situation, the situation at BBMB reservoirs today need not have been so critically now.

India has no transparent, participatory and accountable reservoir operation policy. The reservoir management entities have no clear policy matrix with goals that they try to achieve through the management of water flows. As a result, the errors are thus learned and re-learned each time the rains deviate significantly from the average. This has to change - it is high time that the Governments of India and the States develop a more responsible, transparent, participatory and accountable reservoir operation policy, with attendant rules and norms. Until that happens, people will continue to suffer needlessly, from the mistakes of some individuals who can't even be held accountable.

Climate change has now become an irrefutable fact, and reservoir operations need to be more flexible and responsive to weather predictions, be they about low rainfall or high rainfall. Dam operators cannot simply neglect these predictions, but should develop strategies to cope with them.

Himanshu Thakkar is with the South Asia Network on Dams, Rivers and People.