Running wild with the BD Act

While the Biological Diversity Act is touted by the government as a conservation legislation, its application does not show much evidence of this intent. Kanchi Kohli reports.
14 November 2009 -

In 2006, India's National Biodiversity Authority (NBA) signed an agreement with a researcher based in New Delhi, Dr Rikako Kimura, to collect hair and blood samples of the wild ass (see: this link). This agreement was thereafter published on the NBA website in 2009. I have been waiting to get to the depths of this agreement for the last few years.

The NBA's permission had to be taken because since 2002 India's Biological Diversity (BD) Act prescribes a clear procedure for any individual or institution seeking to access biological resources both in the wild and domesticated sectors. For a foreign national's application for research, commercial use of Intellectual Property Rights (IPRs), a form with the prescribed fee needs to be filed before the NBA which is located in Chennai. For an Indian national, the procedure entails intimating State Biodiversity Boards (SBB) that are to be set up in every state. Of course, if it is an IPR application, then the NBA gets involved again.

In either instance, before a final approval is granted consultation needs to take place with Biodiversity Management Committees (BMCs) that are to be set up at every village. This is a mandatory requirement.

"The researcher" as the NBA agreement calls Dr. Kimura, is to access the hair and blood samples of the Indian Wild Ass (Equus hemionus khur), to be collected in Sakkarbaug Zoo, Junagad which is considered to be the oldest zoo in Gujarat. After collection, the samples will move to the Centre for Cellular and Molecular Biology. Dr. Kimura's stated purpose, revealed briefly in the agreement is, "we can demonstrate the number of the Indian Wild Ass (Equus hemionus khur) and also compare them with the results of analyzing the chromosomes of the hybrid donkeys (Indian Wild Ass crossed with native donkeys), leading to revealing karyotype of the hybrid and proving the existence of the hybrid." The permission is valid for 5 years from the time Dr. Kimura would have collected her first sample.

The agreement with Dr Kimura also restricts the transfer of the collections, or any associated knowledge, to a third party. It also forbids commercial application of the same, and also bars the researcher from seeking any IPRs without prior approval of the NBA. But how does this work in practice? Once the samples of the biological resource go into CCMB for analysis, how does the NBA ensure that no third party transfer has occurred, or that further experiments within the larger project are not already taking place? Once accessed, the biological material can easily travel many places, within and outside the country, and neither the NBA nor the Government of India has any way of keeping clear tabs on this. 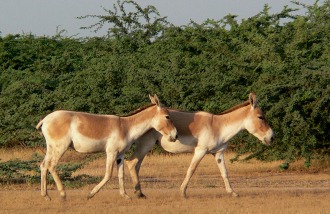 Once accessed, the biological material can easily travel many places, within and outside the country, and neither the NBA nor the Government of India has any way of keeping clear tabs on this. (Photo: Indian wild ass; image from Wikipedia Commons)

•  From biodiversity to biotech
•  Read the fine print

This risk is quite wide-spread. As of July 2009, the NBA has granted approval to 358 applications for research, commercial utilisation, third party transfers, IPRs and also collaborative research. 268 of these permissions are for seeking IPRs, most of which have been granted to CSIR. And according to the latest agenda of the NBA's 15th meeting, another 205 IPR applications from the CSIR are pending before the NBA, and would have been considered for public approval on 29 October 2009. How does the NBA plan to tackle the issue of monitoring of any one of the 358 approvals already given, or the many others it is preparing to give?

While the Biological Diversity Act is touted by the government as a conservation legislation, its application does not show much evidence of this intent. Instead what the Act is really being used for is to facilitate approvals for use of germplasm for biotechnology applications and also for seeking IPRs. The sheer number of such outcomes since the enactment of this law is enough to remove any doubts that this is the real purpose for the Act. When it was introduced, the BD Act faced severe criticism for its endorsement of IPRs on biodiversity and local knowledge. We now see it unfolding before our eyes.

Meanwhile, we still have a long way to go to realise even the small potential of the conservation clauses that are present in the law. Specific to those are a sui generis (of its own kind) system to protect local knowledge, prevention of activities that are destructive to biodiversity or setting up of biodiversity heritage sites. All of this has been laid waste by the 'IPR-centric' view of biodiversity resources.

It is noteworthy that the agreement does not stop CCMB itself from trying to exploit the intellectual property gleaned through this research. So I asked myself, what is CCMB's interest in this project? The Hyderabad-based centre is a national laboratory of the Council of Scientific and Industrial Research (CSIR) set up in 1977. The samples are perhaps taken here because CCMB has an ongoing Genetic Engineering project on the DNA typing in Wild Life Management. The website of the Centre states upfront that following the genetic fingerprinting and isolation of chromosomes, the research can help raise healthy off-springs that can be identified and chosen for their genetic endowments.

But that's not all. Once these genetically modified animals are created, there are clear intentions of seeking patents (one form of Intellectual Property Rights) on such animals. In such an intance a patent application will be filed in India and USA. This project is being carried out in collaboration with the Central Zoo Authority of India and over 250 blood samples from animals from various Indian zoos have been already collected (see: this link).

Presumably, the collection of wild ass samples from Sakkarbaug Zoo is part of this process, but if so the agreement with NBA does not state it clearly. The agreement is solely in the name of the individual for study towards biosurvey/bioutilisation. There is a generic requirement that this study should be linked to an Indian university/institution to transfer knowledge and expertise developed during the research, but there is no specific mention of CCMB as this institution.

CCMB, however, was quite instrumental in the project, as evident from the trail of applications. On 15 June 2005, during the 3rd meeting of the NBA the application from Dr Kimura was considered. The agenda note of the meeting reveals that as per the decisions of the earlier (2nd) NBA meeting of 20 August 2004, letters seeking expert advice were sent to Director, CCMB among other experts. The NBA did not grant approval at this point. However, the application was re-submitted in 2006 and considered by the NBA in its seventh meeting dated 20 July 2006, where the letter of clarification/support from CCMB was awaited.

The minutes of the meeting state, "A letter has to be written to the Director, CCMB, and Hyderabad to verify whether any MOU/Agreement has been made with the applicant to do research on Wild Asses." The then Chairman of the NBA, S Kannaiyan is authorised to grant approval as soon as the letter of clarification is received., The agreement was signed with Dr.Rikako Kimura as an 'individual' researcher on 23 November 2006.

As I wait for the next 205 IPR applications of the CSIR to be revealed, I wonder if one of them will be seeking a patent for creating a genetic hybrid of the Indian wild ass.