Climate change is already affecting millions of people; many are forced to do the things that everyone else should be doing too - conserve forests, curtail excess use of water, and roll back pollution. Ramesh Menon reports.
01 September 2004 -

Climate change has occurred naturally in the past for various reasons; we see ourselves that one year's winter is often different from the previous one. So, it can be surprising to some people that environmentalists in India are so worried about it now. In particular, they say that countries like India - i.e. relatively poor nations - should be particularly worried as climate impact changes are going to impact the poor in a cruel way. Their concern is shared by scientists around the world, who have been warning about the consequences of global warming for some time now.

Over the last two hundred years, the burning of fossil fuels has contributed to increasing greenhouse gas - in particular, carbon dioxide - emissions. These gases are like a blanket; they trap the heat from the Earth's surface, and keep the planet warm. This has resulted in rising surface temperatures and several other changes - for e.g. increase in sea surface level - across the world. For now, the changes are small, but much larger impacts are predicted. The 1990's was the warmest ever since temperature records were maintained; the Inter-governmental Panel on Climate Change (IPCC) projects that over the next hundred years, the earth's surface temperature could increase by 1.4 to 5.8 degrees centigrade.

Forests are nature's means of absorbing carbon dioxide from the atmosphere and cleaning up the air. But, deforestation in the last fifteen years has resulted in nearly 200 million hectares of forests being lost - that's almost half the size of India! As a result, a lot of the carbon dioxide that would have been taken up by plants is now in the atmosphere, adding to the heating effect.

Climate change can alter the local environment in important ways, for e.g. by changing rainfall patterns or eroding coastlines. Higher temperatures can also deplete snowpacks and glaciers, which have been reliable sources of water. The Gangotri glacier in the Himalayas for example, is retreating at a speed of about 30 metres a year. If warming continues, there will be excess water flowing in the rivers. But once this source begins to dry there may be dry periods resulting in very little water flowing down into life-giving rivers. It is a scary scenario. As it is, many parts of India reel under the impact of drought every summer. 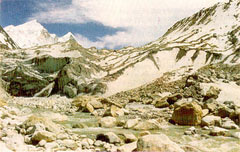 Picture: The Gangotri glacier is retreating 30 meters each year.

Sea level rise may have a physical impact on coastal areas and island states. People living in low-lying areas like Bangladesh live in the fear of severe flooding. Islands like the Maldives face the threat of being swallowed by the sea. India's long coastline of over 6000 km is densely populated. Several million people may be impacted in India alone if the sea level rises by a metre. By the end of this century, there will be a sea level rise of half a metre, according to the IPCC.

Even small changes can have significant impact in local communities. Take for example, the large mangroves of the Sunderbans. Nearly six hundred thousand people who work in industries that use raw materials from the area; and climate change that destroys the mangroves will affect their livelihood directly. is tied to the future of Sunderbans.

Warmer temperatures could lead to migration of alpine forests to higher elevations in search of more moisture or cooler temperatures. This is already happening in Uttaranchal, points out Dr. T.P. Singh, a former forest official in the state. Warm and moist climates might also result in the spread of vector borne diseases like malaria. Water borne diseases like diarrhoea and cholera would also continue for longer periods affecting larger populations.

The rise in sea surface temperatures could also influence the distribution of marine fish species. If, in response to warmer ocean temperatures, fish off the coast of Andhra move north to Orissa waters, that would dramatically impact fishing communities in the southern state.

Developing countries that are battling population growth and poverty are the most vulnerable to the impacts of climate change.  •  Clouds over global warming

Changes in temperature and rainfall patterns will directly affect agriculture and food security too. Countries like India whose economies are largely agricultural and heavily dependent on rainfall could be the worst affected. Almost two thirds of Indian agriculture is heavily dependent on natural factors such as rainfall. Millions in India would be affected if the cycle of rains got disrupted.

Developing countries that are battling population growth and poverty are the most vulnerable to the impacts of climate change. Ironically, most developing economies are also heavily dependent on climate sensitive sectors like agriculture, forestry and fishing. Many of these countries are facing challenges of poverty alleviation and economic growth. The growing impact of climate change will only aggravate their problems. Many of these nations are also in tropical nations like India, where maximum temperatures are already close to the limit of human tolerance levels. Even a small increase in temperature would be felt far more severely here than countries of temperate climate.

Climate change is already affecting the poor. Many communities are aware of the changes going on around them, but usually they are powerless to stop the causes. For one thing, the national government has rarely responded to their concerns of life and livelihood. But there is an even bigger problem: global warming and the changes it produces, cannot be tackled by even the Indian government on its own; instead it requires collaborative action by all nations, something that has remained elusive so far. The Kyoto Protocol on managing global climate has been ignored by the United States, the world's larger consumer and polluter. And there is no sign of a meaningful alternative.

What local communities can do, meanwhile, is become more adept at responding to the changes - to protect coastal areas with forests, manage water resources prudently, improve drought and disaster management, and design programmes that will address development issues without serious ecological footprints. And some of this is already happening, out of necessity, if not foresight.

These changes are a small beginning. Reducing greenhouse gas emissions is one of mankind's toughest challenges today. Without partnerships that involve both the developed and developing countries, this is not going to happen easily. Developed countries possessing technologies for cleaner production would do well to transfer these at affordable prices to poor countries. The economic transition that can lift people above the poverty line has to be accomplished without the attendant large-scale pollution through the use of cleaner technologies. Moving from fossil fuels to renewable energy is one answer. Countries will have to move towards renewable technologies and harness the power of the sun and the wind.

Climate change is also increasingly becoming a more political battle between the rich and poor countries, as well as between the rich and poor citizens within nations. India, for example, has argued that rich nations - which are responsible for most of the pollution, and whose development was made possible by consuming fossil fuels - should take the lead in cutting their use of fossil fuels. But this is a logic that is not applied within India itself. Here, poor communities continue to be disadvantaged by the consumption of the rich, and increased consumption itself is offered as the only hope for millions to rise out of poverty.

Climate change has already started affecting the poor. Future strategies to combat climate change will be more effective if it is linked to development.

One risk that is not mentioned often is this: policymakers in both rich and poor countries appear to believe that whatever the risks from climate change are, they can be managed by addressing them at a later date. This postponement of the solution assumes that any corrective measures applied later on will work. This is not necessarily true, thanks to what is known as thermal inertia.

Unlike land, water bodies do not change temperature dramatically. We see this in daily temperatures; most tropical beaches are swimmable at night or day, but the land can get uncomfortably hot (and sometimes even cold). This 'inertia' means that the oceans are warming only slowly in response to greenhouse gases, but it also means that once warmed, it will be extremely difficult to reverse that. Most scientists believe it will take hundreds of years to reverse ocean warming. Policy makers who imagine that answers to the growing problems of climate change can be found later should instead be looking at communities that are implementing solutions now.

Ramesh Menon is a journalist and documentary film maker. His film, Global Warning!