Civil litigation? No, thanks.

People are shunning civil litigation in the states where there is no hope of obtaining justice in a reasonable amount of time, where instead of relief from the court all they can expect is a new date for the next court hearing. Kannan Kasturi reports.
12 July 2009 -

Courts usually figure in the media for two reasons - either a landmark judgement from the Supreme Court or one of the High Courts, or the extraordinary length of time after which some case has been concluded. The gigantic backlog of cases in the Indian Courts, over 30 million at last count, is legendary. The picture that stays in the mind is of a highly litigious citizenry, having unlimited patience, willing to sit it out for years and even decades to see through its legal battles.

Against the backdrop of this image, some recent observations of the Chief Justice of India (CJI) come as a surprise, to say the least. In what he considers to be disturbing trends, the CJI has pointed to the declining civil litigation as well as the overall low levels of civil litigation in certain areas of the country. But what are the facts of the matter? How do the observations of the CJI gel with the fact of the humongous backlog? If civil litigation is indeed declining, is it not a trend to be welcomed? Where is the quantum of litigation low, and what can be the reasons for it? Many questions come up, that can only be answered by looking at hard data.

Evidence for the changing composition of litigation

A little background first, for those who may be unfamiliar with India's legal infrastructure. The bottom two tiers of the infrastructure consist of District Courts and Subordinate Courts, termed the Lower Courts. The Lower Courts carry the bulk - fully 87 per cent - of the litigation load in India. Litigation generally originates in a Subordinate Court and by virtue of appeals reaches the District Court. This is where the aam aadmi has to, perforce, seek justice. The two higher levels of the hierarchy - the High Courts and the Supreme Court - almost exclusively deal with appeals.

Civil cases relate to disputes involving land, rent, property, contracts, matrimonial matters, credit, industrial disputes, land acquisition and the like; a plaintiff typically seeks restoration of rights in terms of position, title or property, or monetary compensation. Criminal cases, on the other hand, deal with offences under the Indian Penal Code and other laws that provide for punishment through incarceration.

Table 1 captures litigation trends over the last decade in the Lower Courts for two states, UP and Bihar. The surprising revelation is that the number of pending civil cases has actually come down dramatically in UP while remaining almost constant in Bihar. This is against the backdrop of the population increase that would have occurred over seven years and the general trend of increasing backlog of cases, the rate of disposal of cases typically lagging behind the rate of institution of new cases. Overall, the ratio of the load of criminal cases to civil cases is seen to be going up rapidly over the years in both the states.

Another number to look at relates to new cases arriving in the courts, figures for which have been published by the Supreme Court for the last few years. Table 2 shows the significant change just over a period of 2 years in the arrival rates of civil and criminal cases in UP, Bihar, West Bengal and Assam. While the numbers of civil cases instituted are dropping, the numbers of criminal cases instituted are rising sharply with the ratio of criminal to civil cases climbing rapidly up. Returning to the long term changes in the composition of the backlog in UP and Bihar Courts (Table 1), the numbers may very well indicate that falling interest in civil litigation and increasing criminal litigation has been the trend for some time now in these states.

Variation in civil litigation across the states

How does the magnitude of civil litigation vary across the different states of India? A measure of this is the number of new cases instituted in the District and Subordinate Courts in each state for every 10,000 population. Table 3 is a compilation based on data for 2008 for the most populous states.

The data is striking. Bihar, at the bottom of the table, had only 5 new cases per 10,000 population in 2008 compared to 123 in Tamilnadu occupying the top. The all India average is 35. The eastern states all have institution rates below 15, less than half the all-India average. Some questions arise. Are high rates of institution of civil cases undesirable? What can account for the huge variation in litigiousness of people across India?

The answer to the first question is seen in the correlation between court use for civil dispute resolution and economic development. Marc Galanter, Professor of Law and South Asian Studies at the University of Wisconsin who has researched and written extensively on India's legal system, provides some comparative numbers in a 2003 paper. Annual rates of filing of civil cases in courts of first instance in the 10 year period 1987-96 varied from 123 per thousand inhabitants (Germany) and 111 (Sweden) at the top to 2.6 (Nepal) and 1.7 (Ethiopia) at the bottom for 35 jurisdictions that were considered. Empirical data points to increasing court use with economic development.

How is the huge variation in litigiousness between different states to be accounted for? There may be several dimensions to the problem including illiteracy (high in Bihar, Jharkhand, UP), a tribal population (high in Chattisgarh, MP, Orissa, Assam, W Bengal) among whom the judicial system was never established, and - most importantly - the efficiency of the legal system itself. To explore the last dimension, we can look at how the litigation rate is affected by the time taken in resolution of cases.

One way of measuring this efficiency is to calculate how long it would take to resolve the entire backlog of cases, at the rate at which cases are being currently resolved, assuming that no new cases arrived in the courts. Chart 1 shows two dimensions of the civil litigation in District and Subordinate Courts of the different states - arrival rate of civil cases in 2008 and the size of the backlog specified in the measure described above. 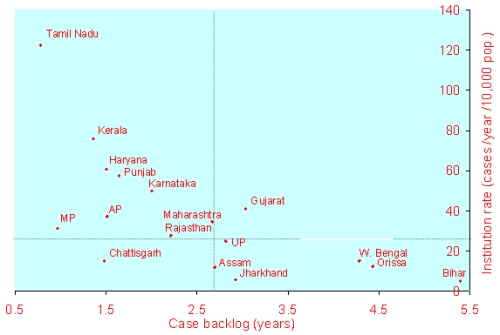 Chart 1 shows a remarkable correlation between the case backlog and the number of new cases arriving in the courts across the different states. The chart is divided into four quadrants and with the exception of Gujarat and Chattisgarh, all the states fall into the upper left quadrant or the lower right quadrant. States with backlog greater than 2.7 years have a new case institution rate lower than 27 per 10,000 population (with the exception of Gujarat) and states with institution rate greater than 50 per 10,000 population have a backlog less than 2 years. Clearly, while several sociological factors may be at play, the access to justice - availability of justice at a reasonable cost in a reasonable time - counts as a major factor for people to take a decision to approach the civil courts.

The conclusion is inescapable. People are shunning civil litigation in the states where there is no hope of obtaining justice in a reasonable amount of time, where instead of relief from the court all one can expect is a new date for the next court hearing. 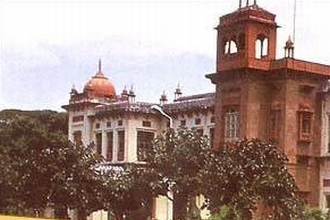 Tamilnadu can clear its backlog in 9-10 months, at its current rate of hearings, but Bihar would need almost five and a half years. (Picture: Patna High Court).

People invariably have disputes that they need to resolve in the ordinary course of living. If these disputes do not surface in the courts, it is likely that they are being resolved using alternate mechanisms that do not involve the state, possibly even the use of force. The extremely low rate of civil litigation in the eastern belt states is thus definitely a cause for worry for the judicial leadership. But what is the Government doing about it?

A "bypass" for corporate India

Over the years, besides encouraging sporadic Lok Adalats that provide a platform for compromise solutions, the main activity of the Government on the ground has been to set up specialized tribunals that divert some of the load away from the Civil Courts, but also, importantly, save government and corporations - both private and government owned - from being caught in the morass of civil litigation in the Lower Courts.

Tribunals have the power of Civil Courts but do not follow the cumbersome Code of Civil Procedure of 1908. Appeals of Tribunal decisions can be directly heard by the High Courts allowing a complete bypass of the Lower Courts. Besides Administrative Tribunals that keep government-employee disputes out of the lower courts, there are Tribunals for claims relating to Income and Sales Tax, Customs, Debt Recovery and Motor Vehicle Accidents, to name a few, that keep corporations out of the Lower Courts. The latest examples of the strategy to "protect" corporations from the Lower Courts are the Cyber Appellate Tribunals to be set up under the IT Act.

But even while serving to reduce the number of cases filed in lower civil courts, Tribunals ensure that the Lower Court system does not become the target of middle class and corporate led activism - these sections having no need to experience its debilities. And as for the justice system of the aam aadmi, it seems things will have to get much worse before they get any better.