The establishment's appetite for large dams diminished marginally in the late nineties, but encouraged by the World Bank's low-key decision to restart funding, Indian governments are ready to start building again. But are large dams worth the expenditure? Tarun Jain and Ashima Sood report on the findings of a new research paper.
31 December 2005 -

Waterlogging, ineffective irrigation, changing crop patterns, the promise of electricity  these lines from a Narmada Bachao Andolan (NBA) protest song highlight the recurrent issues that plague not just the Sardar Sarovar Project, but large dams across India. In the forty odd years since Prime Minister Jawaharlal Nehru pronounced the Bhakra Nangal dam "the new temple of resurgent India", policy discourse has followed a tradition of reverence towards large dams. Questioning either their efficacy or the processes of governmental decision-making that sanction their construction remained an act of sacrilege. In the years following Bhakra Nangal, dam construction proceeded at a furious pace.

 The percentage of Indian districts that house a large dam: 54 (any dam over 30 metres in height)
 The increase in large dams between 1970 to 1999: 2482
 The number of displaced persons: varying estimates, 21 million-40 million, perhaps higher.

With the dogged debate initiated by the NBA, the water resources establishment's appetite for large dams diminished marginally in the late nineties. But encouraged by the World Bank's low-key decision to restart funding large dams (New York Times, June 5, 2005), the state is ready to start building again, with an ambitious river-linking project and numerous projects proposed in the North-east (see map).

Given the stakes involved and in the absence of reliable data, each side paints the other in sweeping simplistic terms. While this makes shooting practice easier, it also hinders forming an informed, democratic and rigorous conclusion about the efficacy of large dam projects in India. As a result, the uncontested social science and policy knowledge base remains small.

"[This issue] was getting a lot of policy attention but little was known about the effect of the average dam and there is little literature on returns to infrastructure," says Prof. Rohini Pande of Yale University, one of the authors of a new research paper on the socio-economic impact of large dam construction in India between 1970 and 1999. Along with Prof. Esther Duflo of Massachusetts Institute of Technology (MIT), Pande has used publicly available data to develop a framework to evaluate the impact of public infrastructure projects and apply this framework to examine the case of large dams in India. Their research paper presents conservative but detailed bottom-line estimates for the net benefits from large dams in India.

Duflo and Pande consider a number of arguments for and against dams.

 Food grain production increases - farmers harvest multiple crops every year, including in the mix more profitable but water-intensive crops such as sugarcane.
 Floods and droughts are controlled, though land is also destroyed through water-logging, increased soil salinity and submergence.
 Levels of inequality are impacted as people are displaced with uncertain compensation, land prices increase due to submergence and economic activity increases through development of fisheries and tourism.

Uncontested social science and policy knowledge base on the efficacy of large dams remains small.

Before the Narmada Bachao Andolan raised the issue, decision-makers did not even consider the range of non-monetised displacement and environmental effects of infrastructure projects.

Lacking data for individual farmers or information to identify the command and catchment area boundaries for all the large dams in India, Duflo and Pande came up with a creative alternative: district-level data from the annual National Sample Survey (NSS) conducted by the Government of India. Since districts are easily identified as upstream (and hence in the catchment area) or downstream (and hence in the command area) from the site of the dam, Duflo and Pande's empirical strategy was to compare these districts on agricultural productivity and income inequality both before and after dam construction.

This comparison is not a straightforward exercise in looking at the "before" and "after" measures for productivity and inequality. The dam building process presents a classic chicken and egg problem: which came first - the dam or agricultural prosperity? Or in other words, given that the state is primarily responsible for financing and constructing dams, are agriculturally prosperous states more likely to build dams or are states that build dams more likely to be agriculturally prosperous? The number of dams is positively correlated with changes in farm productivity and negatively with poverty - witness the concentration of dams in Gujarat and Maharashtra, simultaneously among the wealthiest and most prolific dam building states.

As expected, the results show that dams do not significantly impact gross or net irrigated area in their own district (where they are located) because of submergence and degradation of land around the reservoir, but do increase irrigated area downstream by 1.1 per cent. Cultivated area also decreases substantially in own district and marginally in downstream districts due to loss of land to submergence, canal building, water logging and salination.

 Dam construction decreases overall agricultural production and yields slightly in the own district and increases them significantly in downstream districts.
 Of the three water intensive crops that they consider, land area under cultivation of sugarcane, cotton and rice increases. HYV crop yields do not increase, however, because farmers who grew these crops already had an assured supply of water and were confident about the yields. This suggests that dam water widens access to irrigation rather than improving its reliability for those who already have it.
 Interestingly, this increase in area under water-intensive crops does not come at the expense of the non-water intensive crops they consider - millet, pulses and wheat. However, these last results are not statistically significant, which means that the differences are no larger than would be predicted from natural variations in data. 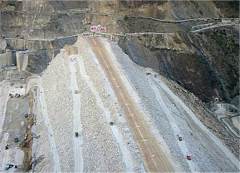 Construction of the Tehri Dam in Uttaranchal. Trucks are seen taking material up to the top. Pic: Tarun Jain.

Perhaps the most topical results are those related to rural welfare, as they also capture the impact of redistribution through resettlements within the state. Duflo and Pande find that rural incomes and poverty both increase noticeably in the dam's own district, and marginally in downstream districts. Inequality levels do not change in own or downstream districts as a result of dam construction.

Duflo and Pande present a cost-benefit analysis that monetises the value of irrigation and farm productivity gains. Dam irrigation is responsible for only 9 per cent of the growth in agriculture in the study period. Thus Duflo and Pande's study directly contradicts the claims of dam proponents, particularly the International Commission on Large Dams (ICOLD), an international body of dam builders that attributes as much as 80 per cent of agricultural growth to dam irrigation. The net present value (NPV) for dam construction in India is 1 per cent (without accounting for a variety of costs and losses, described below, as well as non-agricultural gains). The NPV is a common measure for returns on any kind of public or private investment - it nets out all costs, including the cost of foregone opportunities, from the stream of income or benefits.

What are we to make of these results? The calculus for winners and losers is marginal benefits downstream and significant costs upstream. The entire investment in dams yields society an NPV of 1 per cent excluding all non-pecuniary factors from the analysis. Is an NPV of 1 per cent appropriate compensation for all the cultural and environmental losses from submergence and the trauma and loss of identity of the 21 million displaced?

Even as Duflo and Pande offer us an important way into a formalized cost-benefit analysis of large dams, it is important to keep in mind the systematic limitations of this analysis. Like the old saw says, men can drown in streams with an average depth of six inches. So we would do well to keep in mind that these results only apply for the aggregate  the consequences for individual dams and individual communities may be significantly worse. Thus a comprehensive analysis of this kind is no substitute for careful post-project evaluation on a case-by-case basis.

It is also important to consider the effects that Duflo and Pande do not account for. A key lacuna is the absence of out-of-district displacement and resettlement effects. If poor oustees are resettled outside the district, then both welfare and inequality will perversely improve. Duflo and Pande argue that census records do not show significant out-of-district migration and thus their in-district analysis captures the economic repercussions from displacement. However, the Sardar Sarovar project among others included a large out-of-state resettlement component. As arable land becomes scarcer, out-of-state solutions will increase for future dam projects. The displaced have over the decades rarely received compensation in the form of agricultural land; and outcomes for them have been rarely positive.

Despite the voices of the protest from the displaced and civil society, why do dams get built? Part of the reason is that before the NBA raised the issue, decision-makers did not even consider the range of non-monetised displacement and environmental effects of infrastructure projects.

The decision-making on such projects is often independent of cost-benefit analysis. In a democratic country, dams would be built if the number of voters who view them as a perceived benefit exceed the number who perceive them as a loss. Given the nature of India's electoral system, the beneficiaries do not even need to be in a majority. Just a plurality of voters who favour dams strongly enough can decide to back candidates who promise to build dams, and dams will be built. As the NBA has demonstrated, the gainers from dams are often the politically and financially powerful; the losers, tribal or marginal rural communities, have few means to access the nation's attention. And perception of losses and gains is indeed often influenced by spending on mass media campaigns; is it surprising that the poor and the voiceless draw the short stick in the dam building game?

The audience of the Duflo and Pande study therefore comprises not only decision-makers in the World Bank or the Planning Commission; in addressing the wider civil society, they also help demystify and desanctify the "temples of modern India", thus facilitating a more balanced debate.

As the time of writing this article, a chilling illustration of the processes that aid dam construction comes from the Khuga dam site in Churchandpur district, Manipur. Three oustees fell to the bullets fired by security forces protecting the construction site from protestors on December 19. The dam construction started in 1984, and they were still to be compensated, 21 years later.