Faced with a multiplicity of values, mainstream conservation has tended to retreat to biocentrism, pragmatism or scientism. It would be more tenable to embrace a broad-based and democratic environmentalism, writes Sharachchandra Lele.

The concept of 'biodiversity conservation' includes diverse notions of what part of 'nature' one is trying to conserve. Moreover, the conservation discourse is part of a wider discussion on what kind of world we want for both humans and nature. Over the past few decades, debates have erupted on both fronts: what nature is worth saving, and how to link concerns for nature with concerns for larger societal well-being.

In brief, 'wildlife' and 'wilderness' conservationists focus on charismatic megafauna and  'pristine landscapes', respectively, primarily for aesthetic or spiritual reasons. Concern  for 'all sentient beings' is driven by concern for animal rights or feelings of stewardship. Biocentric or ecocentric perspectives demand that all biotic and abiotic elements in pristine ecosystems be conserved, because such ecosystems have intrinsic value or moral standing. Alternatively, global ecosystem processes may be 'valued' for ensuring human survival.

These different rationales do not necessarily converge to a compatible set of objects of conservation. Animal rights thinking or 'compassionate conservation' makes an equal case for wild animals and domesticated animals, whereas wildlife-lovers would likely recommend culling stray domestic dogs to prevent them from spreading rabies. But animal rights concerns do not generally extend to mosquitoes or pathogens, and although 'deep ecologists' talk about holism and including all self-organizing nature, they do not typically include human beings, because then urban landscapes would be a part of nature.

While philosophical debates on the ethical positions are possible and scientific reasoning can highlight overlaps in their implications for action, monotheistic approaches are untenable. Unfortunately, the mainstream of conservation, largely based in the Global North but including many urban conservationists in the Global South, has clung to the notion of the 'intrinsic value' of wilderness and wildlife. The tendency is to resort either to fuzzy terms, to a 'pragmatic' ethic or to an intolerant 'scientism'.

'Biodiversity conservation' is a classic fuzzy term. In theory, diversity can be the property of all kinds of ecosystems, including agriculture and animal husbandry. But in practice, it focuses only on wildlife and wilderness conservation. Calls to stop philosophical debates and focus on 'what works' are even more problematic, because their pragmatism sidesteps the debate about 'what works for whom' and 'from which perspective'.  Whereas criticizing other ethical formulations (such as 'compassionate conservation'- where the focus is on the individual animal, not the species) for being 'unscientific' imposes a  pseudo-objectivity on a fundamentally normative debate.

Despite their range, and the passion of many advocates of each position, these varied debates  have not changed mainstream conservation thinking much. For that, we need a more tenable approach towards achieving a balanced society–nature relationship.

Engaging with 'use values': the mirage of ecosystem services

Mainstream conservation has even greater difficulty with other values that humans hold. Human survival requires the use of biotic nature, and such use inevitably leads to the modification of ecosystems, making them 'non-pristine'. By only focusing on the intrinsic value of 'pristine' nature, mainstream conservationists become blind to the equally intrinsic value of human life, or to the fact that both values originate in the human mind. Attempts to reconcile conservation and human development then flounder.

The 'ecosystem services' (ES) framework was perhaps the boldest 'scientific' attempt to link conservation with the use values of nature. By this framework, it is proposed that sustaining life on earth can ensure economic development, even while safeguarding  wilderness values, now termed 'cultural services'.

This win–win argument, however, has many holes. Firstly, the ES framing ignores  trade-offs. Maximizing conservation values such as pristine-ness and wildlife is often incompatible with maximizing use values. Direct use values are often maximized and can be sustained under far-from-pristine conditions, such as the millennia-old rice terraces of the Philippine Cordilleras. Conversely, much of the wild nature treasured by wildlife conservationists has little direct use value and only limited indirect benefits.

Secondly, wild nature is often downright dangerous: nearby communities face death from carnivores, reptiles or pathogens, as well as crop or livestock damage from pests and wildlife. Arguably, all of human history has been a balancing act between maximizing ecosystem services and limiting their risks, whether by clearing jungles, building fences or killing predators.

Thirdly, much of current human well-being, especially in the Global North, is based upon massive use of abiotic resources, such as petroleum and metals, not biological ones. Indeed, mainstream conservation is premised upon the conservationists having first solved the challenge of living comfortably using abiotic resources. A safe distance from wilderness is a precondition for the current urban love of megafauna.

Finally, while some users of the ES framework stop at showing that biotic nature provides multiple but incommensurate values, others use economic valuation to aggregate all values into economic welfare. This leads to two fundamental problems: the reduction of intrinsic values to their 'willingness-to-pay' equivalents and the inequity embedded in the one-dollar-one-vote logic of benefit–cost analysis.

Consequently, the ES approach has faced stringent criticism from both ends: the believers in nature's intrinsic value upset at its commodification, and supporters of social justice upset at 'neoliberal' conservation. Instead of finding other ways to reconcile conservation and development, mainstream conservation has split into one camp that continues with the ES approach, often pragmatically (i.e. when convenient), and another that has openly retreated to biocentrism. 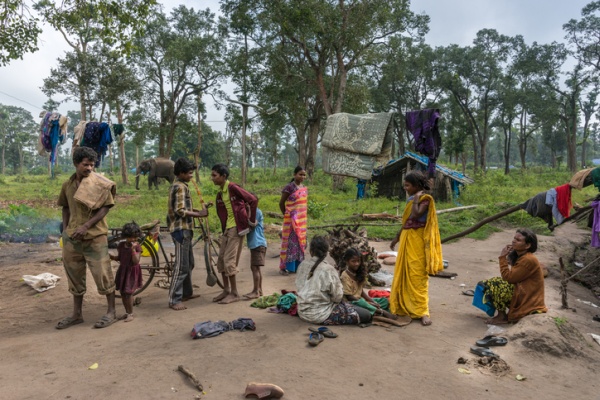 Pitfalls of returning to biocentrism

Unfortunately, the biocentric vision of a 'good society' is shockingly one-dimensional. Completely missing are other concerns that society legitimately holds, and that mainstream conservationists take for granted in their own lives.

First is the concern for basic material well-being. How many modern-day conservationists live a US$2/day lifestyle, with no laptops, refrigerators or cars? None. Biocentrism's claim to a moral high ground vis-à-vis anthropocentrism ignores the fact that 'valuing' nature requires 'humans' be distinct from 'animals'. This is not an argument for economic growth, but for dignified livelihoods for all.

Second is the concern for justice. Minimally, this means that if I want a US$200/day lifestyle, I must allow it for others. Moreover, if conservation requires 'cutting back' on the use of nature, who should make this sacrifice? Socially marginalized forest-dwellers living a subsistence lifestyle? Or we urban conservationists whose high levels of consumption cause climate change and drive wilderness-destroying mining, dams and highways?

Third is the concern for sustainability. Sustaining human life and well-being into the future requires sustainable management of renewable resources, limiting the use of non-renewables and averting or limiting the impacts of pollutants, both local (e.g., insecticides) and global (e.g., CO2). But sustaining well-being while limiting fossil fuel use will likely involve more intensive use of biological resources, rendering 'pristine-ness' a far cry.

Finally, once we recognize that conservation itself contains divergent values, that non-use values are not somehow superior to use values, and that there will inevitably be trade-offs between values and therefore between value-holders, one needs a 'procedural ethic' about how these trade-offs are to be decided upon. Truly democratic decision-making – participatory, informed and deliberative – is the only reasonable procedural ethic available.

Re-engaging with a broad-based democratic environmentalism

Conservation thinking brings several important values to the environment–development or environment–well-being discourse. One strand asks us to broaden the definition of well-being, to go beyond material possessions and include the intangible benefits of biotic nature. Other strands challenge us to expand 'justice' to include both future generations and non-humans. But faced with a multiplicity of values within and outside, mainstream conservation has tended to retreat to biocentrism, pragmatism or scientism. It would be more tenable to embrace a broad-based and democratic environmentalism.

Such environmentalism embraces multiple societal goals, including material and spiritual well-being, justice, sustainability and democracy. It acknowledges that both biotic and abiotic nature play a role in meeting these goals, but that there is no one way of managing nature that will achieve all goals for everyone. Given the fundamentally normative and incommensurable nature of these goals, how much and what forms of biota (whether wild, managed or domesticated) are absolutely essential cannot be 'objectively' or a priori determined. Decisions regarding the what, for who and how of conservation and development have to be made through a participatory, informed and transparent process.

Such environmentalism demands that conservationists in the Global North reduce their own environmental footprints before they demand conservation from others and that they engage with the structural causes of these footprints, including capitalism, technology - fetishism and undemocratic governance. They should refuse funding from speculative capital or dictatorships and engage non-paternalistically with communities already living closer to biotic nature.

Lesser conventional top-down conservation action in the short run could help build a broader collaborative movement towards a dignified, just, sustainable and democratic society across the globe, including but not exclusively for non-humans.

Sharachchandra Lele is Distinguished Fellow in Environment Policy and Governance at the Ashoka Trust for Research in Ecology and the Environment (ATREE). A fuller academic version of this article titled, "From wildlife-ism to ecosystem-service-ism to a broader environmentalism", was published earlier in the journal, Environmental Conservation.