Keeping the roots in place

How can forests be protected and sustained during these times of changing climates and the related uncertainties? This question was explored at a recent conference. Darryl D'Monte reports.
19 February 2011 -

On the sidelines of the annual Delhi Summit on Sustainable Development, organised by The Energy and Resources Institute (TERI), the Kathmandu-based International Centre for Integrated Mountain Development (ICIMOD) held a session on 4 February on "Sustaining Forests for Mitigation and Adaptation to the Impacts of Climate Change", along with with TERI and the Ministry of Environment & Forests.

Dr Giridhar Kinhal of ICIMOD spoke about mitigation and adaption measures through innovative use of what is known in UN parlance as REDD - Reducing Emissions from Deforestation and Forest Degradation, a mechanism which was ratified at last year's UN climate summit in Cancun. He referred to India's National Forest Policy of 1988. It specifically recognised what is mistakenly known as "minor forest produce". He mentioned how it provides "sustenance to tribal populations and to other communities residing in and around the forests. Such produce should be protected, improved and the production enhanced with due regard to generation of employment and income."

Since the days of the Raj, foresters have undervalued such produce. In the case of tendu leaves alone, which are used to roll beedis, the annual turnover turns into a few hundred crores. The entire trade of all such produce is now estimated at a mind-boggling Rs.50,000 crores a year. Indeed, it was partly because adivasis in central India were cheated by traders for generations that the Naxalite movement found such a fertile ground in this region. One of the first things the Naxals did after "liberating" an area was to negotiate higher prices for tendu and other forest produce; traders sometimes paid for non-cooperation with their limbs or lives.

The Centre has also reinvigorated the Panchayat Extension to Scheduled Areas (PESA) Act, giving adivasi communities greater powers over their land and resources. In effect, this law their ownership over what foresters abbreviate as NTFP, or Non-timber Forest Produce. Again, this was enacted as early as in 1996, but it was only in response to the Naxal uprising - which the PM himself has stated is the country's biggest security threat - that it has been put into operation to some extent. 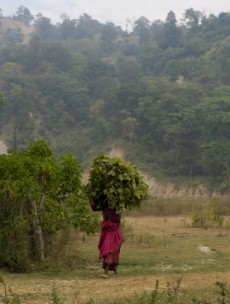 One of the innovations that the forest department in Uttarakhand initiated was the concept of "floating mandis". Since it is difficult in a mountainous region for women to deliver the produce to the market, the mandi was brought closer to them.

However, as can be well imagined, there is a huge gulf between precept and practice on the ground, all the more so in the remotest and most backward areas of the country. According to Kinhal, the problems include the fact that poor and unorganised communities suffer from the absence of business platforms, and have limited bargaining power for their produce. There are unsustainable harvesting practices and asymmetrical power relations - with secretive trade practices on the part of traders who traditional dominated the purchase of such produce.

Further, there is minimal value addition at the community level. There is negligible investment and research, with no collaboration between collectors and industries which finally used some of the produce. There is also an unfavourable policy environment and incentives, while collectors are unable to benefit from the growing demand for herbal products all over the world.

Kinhal advocated a "value chain" approach instead, which could identify strategies for income generation and poverty reduction. There is a "focus on strengthening rural-urban and highland-lowland linkages through analysis and interventions in pro-poor value chains." Analysis identified leverage points for pro-poor interventions, like the development of a "pro-poor, mountain-sensitive value chain framework" interventions in the context of the Himalayas, where ICIMOD works.

There could also be product quality and quantity: with proper harvest methods and quality control mechanisms and standards (labelling, certification, organic production). Market information systems are also needed for mountain producers, all of which could convert policy into action.

He cited an example in Uttarakhand, where the value chain analysis identified specific policy barriers to accessing resources and markets as major obstacles to NTFP-based income. The produce in question was bay leaf. Through small interventions in Chamoli district - famous for being the area where the world-renowned Chipko movement sparked off in 1973 - as many as 66 poor families in six villages, who formed women's self-help groups, benefitted.

There was, in the jargon of development experts, "policy dialogue through multi-stakeholder collaboration" between the government, NGOs, community-based organizations, the private sector and ICIMOD. These resulted in trial readjustments of the harvesting regime and marketing. The immediate outcome was that this enabled mountain communities to sustainably collect and explore a better market for bay leaves. The Uttarakhand state government has initiated steps to scale up and assimilate these practices into forest management plans.

As a consequence, a family was able in a good year to harvest 40 kg of bay leaves, which provided them with a sustainable livelihood. A similar experiment in Tumkur district in Karnataka led to a three-fold increase in wild and cultivated produce. There were five products which sold for Rs.40-50 per kg. A market platform for three species was established, and led to the healthy competition between cultivators' associations.

However, there is a huge regional difference in the availability of forest produce in the country. In Madhya Pradesh, it is available over hundreds of kilometres, at huge distances away from each other, unlike in Uttarakhand, where forest produce is available from a compact 100 sq. km. Another factor, especially important in the case of bay leaf, is the period over which income is generated. Bay leaf has a five-year growing cycle, so there has to be some income generated in between the years of harvest. By simply encouraging smaller cultivation units, the planting in which was staggered across years, the authorities fostered income every year.

One of the innovations that the forest department there initiated was the concept of "floating mandis". Since it is difficult in a mountainous region for women to deliver the produce to the market, the mandi was brought closer to them. Three such mandis have been created which are between 150 and 200 km from the plains. As a consequence, in the third season of the experiment, prices went up from Rs.9 to Rs.39 a kg. Only the villagers were harvesters, not the traders' workmen, as previously.

As Kinhal cited, the authorities also mulled "how prices can be made more competitive; how to enhance the share of the local people; how to improve the local payment systems; how to ensure local infrastructure."

More sustainable NTFP management could address the main drivers of deforestation and degradation, which is poverty and mismanagement of forests, by REDD+. The "+" stands for the addition to the UN mechanism of protecting forest-based communities, which activists got inserted for fear that they could otherwise be evicted in forest protection schemes. A key requirement for adaptation to climate change is to build a community's resilience, which NTFP can achieve. Kinhal concluded: "Sustainable forest management is only possible with local peoples' participation."

Yogesh Gokhale of TERI reported the advantages of fostering community-based biodiversity systems in the sacred forest groves, which dot the entire countryside. In Uttarakhand alone, there are 130 such sites. These can be turned into "community conservation areas", where germplasm can be collected. Through TERI's assistance in one initiative, some 60 varieties of commercially valuable plants, such as rosemary, thyme, oregano and peppermint, were grown. The initiative has yielded 20 tonnes annually and each family an annual income of Rs 2,500 to Rs 3,000.

Hari Krishna from ICIMOD spoke about community practices to reduce the hazards of adaptation to climate change, using an example from the eastern Himalayas. This is the region where the nine largest rivers originated and their basins are home to as many as 1.3 billion people, the biggest number to be affected by climate change anywhere in the world. There is also, ironically, the problem of too little water, which alternated with seasons where there was too much. Local tree crops planted in rotation are better suited to warding off the worst impacts of such changing climates.