A government task force has recently made a series of tax and revenue recommendations designed to restore the nation's fiscal health. Ashwin Mahesh reports.
01 August 2004 -

The arithmetic is simple, as any family that budgets its money knows. If you spend more than you earn, the extra must be borrowed, and paid for with interest. It's a lesson that is usually lost on governments, because politicians are happy to pass on the repayment costs to future generations to whom they are not accountable.

The trouble is, if enough politicians spend lots of money over a long period of time, eventually the repayment problem can no longer be put off to the future. Instead, it must be addressed now. This is roughly the situation under which Parliament passed the Fiscal Responsibility and Budget Management (FRBM) Act last year. After decades of spending more than could be paid for by the revenues of the government, the bill for the interest on those borrowings alone has risen to mind-boggling levels. In the most recent budget that P. Chidambaram presented last month, about Rs.130,000 crores is to be used to pay the interest on outstanding loans. Not the principal, but the interest.

That's money that could have been spent on schools, hospitals, and all those other services that people expect from the government. By the time the interest is paid, and all the unavoidable expenses of running the government are also forked out, what is left for spending on programs for the public good is pretty small - at this time, about 10% of the GDP. India has been somewhat fortunate; of late interest rates have been low compared to their historical averages, and this has kept the cost of borrowings down. But such fortune cannot be expected to continue indefinitely, and the room for discretionary spending is continuously shrinking. The huge increases in defence spending don't help, either.

What this all means is that it's time to tighten the belt on expenditures, and raise more money on the revenue side; whether this is brought about by necessity or prudence is not relevant anymore. And the roadmap for this reform has been laid out in the Report of the Task Force on Implementation of the FRBM Act. The FRBM Act requires the revenue deficit to be wiped out in three years. Old debts would remain, but additions to it could not be made each year except for capital projects backed by some financial justification of their own. The task force - headed by Vijay Kelkar, the advisor to the finance minister - was charged with the responsibility to come up with recommendations for making this possible.

The willingness to consider the medium-term implications of tax and expenditure policies on economic health is an important step in itself; this is unusual enough for politicians who have rarely thought beyond the current year's numbers. Even as this report came in, there was a loud contrary signal from Parliament. The new Finance Bill proposed to push back the start date of the FRBM Act to 2008-9. Still, assuming that the FRBM isn't endlessly delayed by convenient amendments to the original promise to show self-restraint, how does the task force envision its transformation from stated intent to reality?

The broad thrust of the tax-side reforms lies in simplification, and the belief that a more rational, usable, and fair system can improve tax collections that would offset losses to the government from reducing the tax rates.

There are two sides to this coin: either the government can cut back on its expenditure, or it must find ways to raise more revenue. Of the two approaches, the task force has favoured the tax-tweaked one, arguing that rolling back spending could contract the economy more severely than tax hikes. Interestingly, while this argument has been offered to choose tax-tweaking as preferable to scaling back expenditure, the actual proposals on the tax side are in fact not hikes, but reductions! The task force has put its faith behind the George Bush school of economics, arguing that making tax concessions to the investing class can free up capital for investment, thus creating jobs and growing the economy.

But this is not proposed in isolation. The broad thrust of the tax-side reforms lies in simplification, and the belief that a more rational, usable, and fair system can improve tax collections that would offset losses to the government from reducing the tax rates. A key suggestion for tax reforms is that the tax base be widened to draw more payers into the system, mostly by dramatically cutting the long list of exemptions that are now available for tax-avoidance. The task force also proposes the establishment of a small number of tax brackets, thus improving the clarity of the code for most users. Personal income would be limited to three tax brackets pegged at rising marginal rates - Rs.100,000 exempt, from Rs.100,000 to Rs.400,000 at 20%, and higher incomes at 30%. The top rate of corporate tax would also be lowered to bring it in line with the highest personal income rate.

On the enforcement front, a technology-driven system to identify likely evaders, thus freeing honest taxpayers from the threat of audits, is encouraged.

The task force's most powerful urging, however, has been reserved for a far more complex issue: namely, the redistribution of taxation away from production and towards consumption. The group is unequivocal that the long list of cascading taxes established by previous governments - e.g. octroi, stamp duties, entry taxes, etc. - must be abolished and replaced with a single incidence of taxation of products upon consumption. This Goods and Services Tax would treat all processes leading up to consumption as mere pass-throughs; a financial treatment of commerce that is now popular in many countries. Also, the Central Sales Tax and state sales taxes would be folded into this single consumption tax. Recent legislation on taxation of services too would be overridden by the introduction of GST.

Would the states go along with abolition of some of their chief sources of income? To leap past this hurdle, the task force proposes a grand bargain between the centre and the states, whereby the states would exercise concurrent and independent jurisdiction over taxes on goods and services, and receive a portion of the GST levied on imports. This increased access to tax revenues from services and imports, the task force believes, will make it attractive for the states to sign on to the unified structure it proposes.

The supply-side reforms are complemented by demand-side suggestions too. But expenditure cannot be easily controlled by new codes and legislation as taxes are, because the Finance Ministry plays only a supporting role. Actual spending is carried out by a whole host of other ministries, overseen by the Planning Commission. It is imperative, the report notes therefore, that mechanisms of cooperation between Finance and the other ministries be established to get this side of the effort into gear. 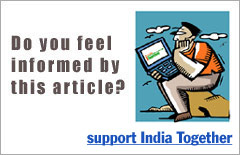 The task force recognized that government expenditure can play an important role in development, but pointed out that is usually worthwhile only when public goods that everyone can access are produced as a result. It therefore proposes that expenditure be limited to creating goods and services from which no one can be excluded - such as law and order - or other quasi-public goods such as education and health which are similarly broadly beneficial. Such spending on creating public goods should also replace subsidies, which typically benefit small classes of people. Expenditure for the production of local public goods - e.g. good water - should be left to local governments, not the state or the Centre. Further, governments should stop patting themselves on their backs for meeting expenditure targets, and instead measure their success by outcomes.

That note of caution could well be applied to the task force report itself. Perhaps these proposals can deliver the discipline called for by the FRBM, and at the same time create broadly acceptable tax regimes and incentives for new investment to grow the economy. It's quite possible that with the report having been written, its misplaced optimism will quickly be cast off by politicians long used to spending beyond the limits of revenue. Such indifference to prudence would not be new; the proposed delay in implementing the Act is surely not a good sign. The task force has identified what may be possible, but it is a long road between that and the good outcomes it promises.

available from the Finance Ministry
01 August 2004

Ashwin Mahesh is a co-founder and editor at India Together. The detailed report of the Task Force on Implementation of the FRBM Act, as well as an executive summary, are both available from the Finance Ministry.