What sways the urban voter?

The slums in Delhi – the "jhuggi-jhopdi" clusters – had traditionally voted for either the Congress or the Bharatiya Janata Party for years, before many among them suddenly switched their mandate to the Aam Aadmi Party (AAP) in the recently-held Delhi assembly elections. However, party loyalty or identification with party does not emerge as a very important factor in determining urban voter choice in most parts of the country and if one speaks to the same people today, several say they have reverted to supporting either of the other two parties, persuaded by the understanding that the AAP would not be a relevant force in the national legislature.

This is, in fact, a manifestation of one among several interesting behavioural trends among voters across constituencies in the country, captured by a recent voter perception survey, which serves to create an interesting picture of how electoral mandates are in effect decided.

The Indian census figures establish that the rapid rate of urbanisation has resulted in an increase in urban population from 29 per cent to 31 per cent over the past decade. Consequently, there is an expectation that there would be changes in voter behaviour, as voter concerns diverge from those of traditional rural constituencies.

The expectation stems from the fact that the needs and relations with the state for an urban dweller are different from that of the rural citizen. The latter, more dependent upon land, the agrarian economy and traditional livelihoods, is perceived to have a different relationship with the polity.

Under the circumstances, it would be interesting to explore if there are specific patterns in urban voting across constituencies in India. Going further, one may ask if there are particular geographical patterns that emerge when one looks at motivations based on which voters decide their mandate across these constituencies. Does age play a role in determining these motivations? If there are indeed such patterns, how do they play out in terms of the voter's economic status and occupation? 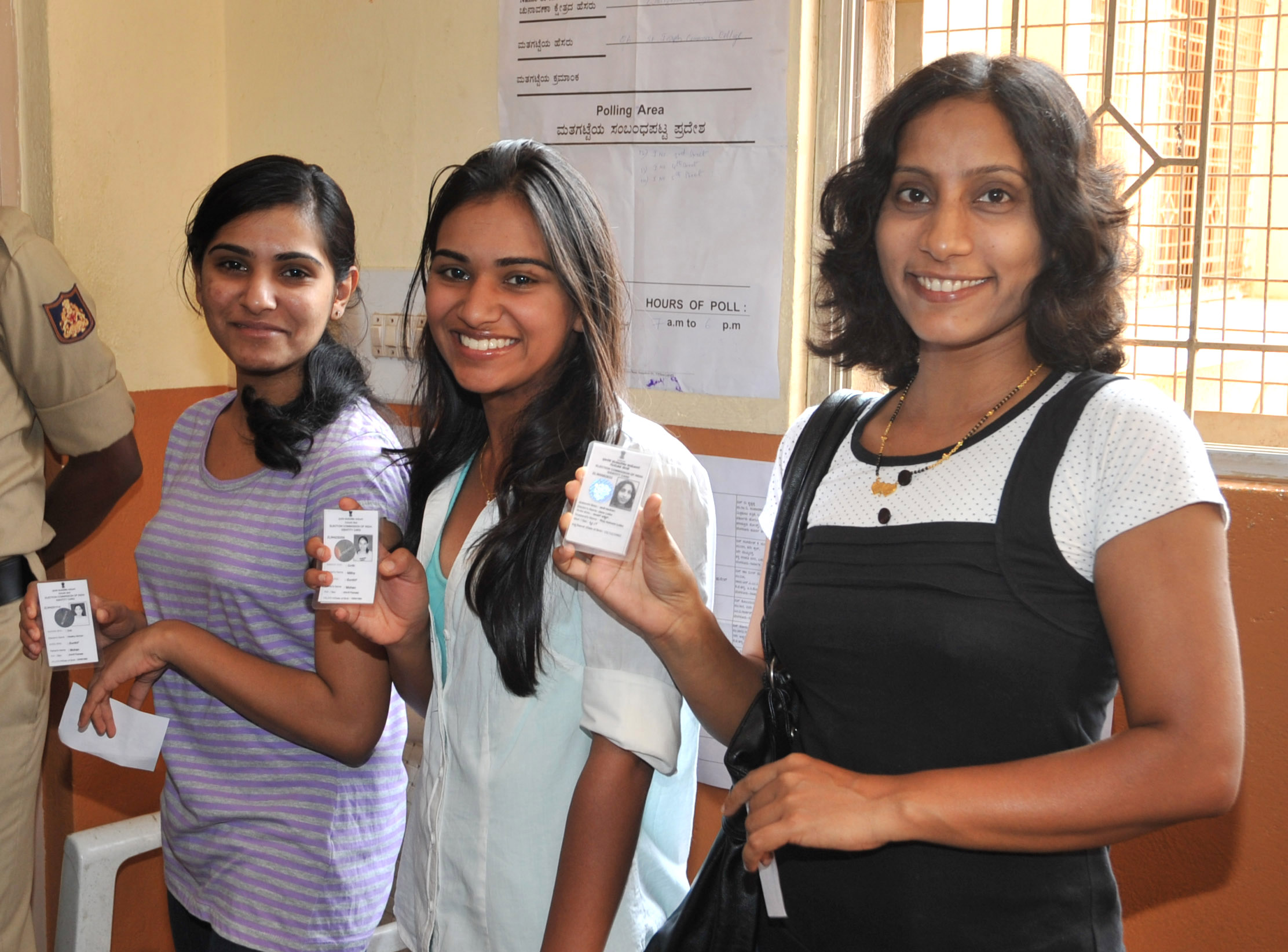 Young voters displaying their identity card, at a polling booth in Bangalore on 17 April, 2014. Pic: pib.nic.in

A recent survey by Daksh and the Association for Democratic Reforms comprehensively surveys the basis of voter choice and identifies background information such as location, gender, house roof type, age, religion, caste, qualification, occupation and assets.

Using GIS one can arrive at general observations regarding voter choice in urban India, across states, by choosing only those respondents who have been surveyed in "urban locations".

These urban locations could be areas which are highly agglomerated urban areas or it could also be semi-urban areas. The classification of "urban" is taken as a given based on the inputs of the above survey, irrespective of differences between "metropolitan", "urban agglomeration", "semi-urban" and so on. This is also in line with the Census classification of urban areas in its surveys.

One question asked by the survey goes thus: "What are the reasons you vote for a Candidate?"

A GIS mapping of responses pertaining to the five points mentioned above (averaged out for each parliamentary constituency) yields the following picture and is presented below. The ordering of importance is classified into five gradients: Values -1 to 0 correspond to "No to Low Importance"; 3-4 correspond to "High to Very High Importance" and the other categories in between indicate a range between Low to Medium to High importance appropriately.

The intensity maps above, provided by the GIS study of the data, confirm certain observations recorded from the voter's ordering of importance of the above factors. Analysing the map, one may draw the following inferences.

Voting on the basis of party identification

This could mean a couple of things: first, party networks are more strong in large urban agglomerations than elsewhere, suggesting why there is higher identification in denser urban settings and secondly, urban voters do not necessarily see much of a difference among parties to identify themselves firmly with them, explaining the high degree of variability of choice across elections in urban areas.

This phenomenon is something that this writer can easily corroborate with experience from Delhi, a snapshot of which has been presented at the outset. Such a phenomenon is also observed traditionally in states like Kerala and Tamil Nadu where voters tend to vote for national parties as opposed to whom they perceive as regional forces, even if they switch their votes to the latter in assembly elections.

A caveat in this determination is that the survey covers very few constituencies in states like West Bengal, which is typically known to have a vibrant party identification among its electorate - something that can be noticed for the data from Kerala as well.

Voting on the basis of identity (Caste/Religion):

One outcome that stands out when this variable is studied is the relatively low importance accorded to voting on the basis of caste and religion across constituencies, barring exceptions cited later. This would fly in the face of popular opinion that holds voting to be predominantly driven by primordial considerations. However, the same finding may be taken with a pinch of salt, as voters might not reveal such considerations candidly.

Taking the data at its face value though, we could say that urban voters in India have relied less and less on caste/religion-based voting across constituencies, as has been pointed out by sociologists like Dipankar Gupta who argue that the emphasis on identity voting in media and academia exaggerates the actual experience of such voting.

This could perhaps also indicate that voting is based on economic considerations like civic concerns, development and so on or more likely, could be linked to patronage by party officials beyond narrow caste/religion considerations, at least in the urban areas.

Take the case of the recent assembly elections in Uttar Pradesh in 2012, a state where identity (caste and religion based) voting is assumed to predominate over any other (because of parties specifically catering to select caste/religious identities). The Bahujan Samaj Party, which is known to be a party favoured by Dalits and has a Dalit leader at the helm, lost a significant number of supporters from the Dalit social grouping, who were peeved at the lack of focus on development as opposed to symbolism by the BSP government. As the paper showed, this lack of support was more prominent among urban youth.

The one major exception to the general apathy for voting on primordial identity happens to be the state of Gujarat, where urban voters are seen to be in favour of voting on caste/religious lines - indicating the level of political polarisation in the state on this basis. The survey data reveals that this is quite the case in certain areas in Uttar Pradesh and surprisingly in southern parts of West Bengal as well (areas which have a high concentration of voters from the minority community).

Voting on the basis of choice of PM candidate

This variable could be useful to reflect the effect of media coverage of elections. With media coverage increasingly focused on individuals and the narrow/reductionist basis of popular elections as referendums over "prime ministerial candidates", one could surmise that the electorate would be influenced enough to consider this as a voting criteria.

The survey results – as the maps show - point out that choice of PM candidates does matter as an important factor to the urban electorate across constituencies, more so in western and northern India – where the three most visible leaders – Narendra Modi, Rahul Gandhi and Arvind Kejriwal from the Bharatiya Janata Party, the Indian National Congress and the Aam Aadmi Party respectively, are contesting.

Voting on the basis of choice of MP Candidate

One prominent finding from the survey is the high importance given to candidate-choice across constituencies, but particularly more so in the economically better off states of northern India – Punjab, Haryana, Delhi (cue the GIS map). In some cases, in places like Delhi, voters have given equal importance and weights to both parties and individuals.

This author interviewed a number of people in Delhi spanning class and community backgrounds to ascertain and corroborate the survey’s findings in this regard. The choice of MP candidate (in some relation to the candidate’s party) was quite foremost across the board, as awareness of the various candidates in the fray indicated.

This could perhaps be due to the nature of the political campaigns in the state, which has been centred on the capabilities of the candidates in the fray – their “clean” record in the public sphere or more specifically in governance - an outcome of the introduction of the new party, the AAP, which focuses specifically on these issues.

Voting on the basis of gifts, money, liquor etc

Unsurprisingly, the number of voters who mentioned that they voted on the basis of gifts, money, liquor etc has been low across most states. It is only expected that voters might be reticent to mark this as a choice that determines their voting decision. Yet, the prevalence of this trend in urban areas is quite known in some states such as Tamil Nadu, where a couple of constituencies like Arani and Salem reveal the "importance" of this form of voting to be somewhat higher than elsewhere.

A look at whether age determines voter choices on all of the above variables (separating voters into four age ranges, namely 18-35 years, 35-50 years, 50-65 years and 65 years & above) shows that invariably, voter choices across the age groups in states are the same apropos voting based on identity or PM candidates. Age, surprisingly does not make as much of a difference in influencing voter choices as geographical location (state) does, even in a country like India, where the demography is skewed towards the youth (voters between ages 18 and 30).

This could be either because no major political party emphasises youth as the crux of their leadership or the segment around which their policies are centred. Or it could be because there is very little differentiation in policies across political parties when it comes to issues related to the youth.

It would also be pertinent to study whether or to what exent voter motivations and choice depend on their economic and educational status, or the issues that bother urban citizens the most. But these would be the scope of separate articles and are best explored independently. As the above analysis shows though, the geography and location of the urban areas are significant differentiators, and manifest themselves in the variations of survey responses across states.