Organic veggies in my Inbox

In operation now for more than two years, Gorus has a network of about 50 committed families as consumers and 25 farmers as suppliers, and growing steadily. Shripad Dharmadhikary reports.
25 February 2010 -

Every Saturday, I open my email inbox to find a mail with a form that I have to fill out and send by Tuesday. The form has a list of vegetables along with their prices. I fill and email the form at my convenience, and on Wednesday, I get my order delivered at home. Not only that, but the vegetables - and other produce like rice, pickles, panner - is 100 per cent organic. This initiative of providing organic vegetables to consumers at their doorstep is a venture of the Gomukh Centre for Rural Sustainability, known also as GORUS. Located about 40 kms from Pune, Gorus is an innovative idea that marries convenience for consumers, assured market for farmers and a quest for sustainable farming.

It began as a small in-house pilot project of the Gomukh Trust that works on issues of sustainable agricultural development for marginal farmers, irrigation management with equitable distribution of water and rural development through Integrated Watershed Management approach in the Kolwan valley near Pune. They started organic cultivation of vegetables on one of their own demonstration farms and established a marketing relationship with 5-6 families. In about six months, this experiment attracted the attention of many neighbouring farmers, who expressed interest in joining it.

In operation now for more than two years, Gorus has a network of about 50 committed families as consumers and 25 farmers as suppliers, and growing steadily. The small numbers are a result of deliberate strategy, a part of the Gorus philosophy and vision. Moreover, as Ashwin Paranjpe, the Principal Coordinator of Gorus, points out, the work of Gorus is very human resource intensive.

One of the key pillars of Gorus strategy is backward integration, ensuring that what the farmers grow is a good match with the demand. At the start of every growing season, Gorus staff and all the farmers get together. They begin by estimating the likely demand for vegetables in the season based on the experience of the earlier year, and the change in the consumer numbers. Once they have an estimate of what quantities of which vegetables are to be produced - for example so much of tomatoes and so much of palak etc. - they estimate the land that will be required to grow it. This is matched against the total land that the farmers have, and the quantities are allotted to each farmer on a pro rata basis. Thus, beginning of each season, the farmer is allotted the area of each vegetable that he or she is to grow. 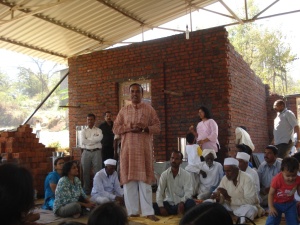 One of the key pillars of Gorus strategy is backward integration, ensuring that what the farmers grow is a good match with the demand. (Above: Farmers sharing their experiences with consumers at a Gorus farmer-consumer meet.)

•  Timbuktu is scaling up
•  Persisting with organic

According to one of the farmers, this is very important for them. He relates the story of how some years back, farmers had grown tomatoes in large numbers, and when the crop was ready, they found that there was a glut in the market, and hence the prices collapsed. Due to this, it was not viable for the farmers to even harvest the tomatoes, let alone transport them to the market. Ultimately, the farmers had to feed them to the cattle. Such stories are a regular occurrence, emphasising the uncertainty of market for farmers and underscoring the importance of an assured market. The backward integration put in place by Gorus is precisely to ensure that they don't have a glut (and hence an unmarketable surplus) of some vegetables, at the same time they can provide what the consumers want.

Gorus also has another important provision. They pay the farmers the same rate per kilo, no matter which vegetable they bring in. Thus, tomatoes may be cheaper in the market than broccoli, but the farmer gets the same rate for it at Gorus. This measure, combined with the above described crop allocation, promotes equity and ensures that all farmers get a good return for their produce.

The advantages for the consumers are obvious. Being able to order from the comfort of one's chair and getting the vegetables delivered at home are the lesser of these. More important are the numerous well known benefits associated with getting organic produce. Organic vegetables are healthier due the absence of pesticide residues and contamination. Consumers of Gorus also swear by the disctinctly better taste of most of the produce. Tired of eating bland carrots and watery tomatoes from the conventional market, Gorus consumers talk with delight of going back to vegetables with real flavours and tastes.

For the farmers, the assured market for their produce is a key element of the whole system, the most important immediate benefit. Moreover, as a farmer Sathe put it, "With our regular farming, we found that when we sold the crop in the market and then deducted the costs of inputs like fertilisers and others, we had little left for our labours. But with organic farming, our input costs have gone down and we earn a good profit." Gorus says that in the conventional marketing process which involves several middlemen and other costs, the farmer maybe getting at little as 20-30% of what the consumer pays. But in the Gorus system the farmer gets as much as 60-65% of what the consumer has paid.

The rest of the 30-35 per cent goes to pay the costs of handling, packing, delivery and the overheads of the distribution and planning system. Over two years, Gorus has reached a financially stable system. The farmers also pointed out that with organic farming, their requirement of water significantly reduces.

But it is the long term benefits that has gotten many of the farmers committed to it. They have experienced soils being degraded due to continuous use of chemical fertilisers. Now they have found a way to get out of this trap and ensure that their soils get enriched rather than depleted. One farmer told this author that "I am 40 years old and my father 75. But he looks more fresh than I do, for he has lived on organic food, and I have grown up on chemical food. With this switch, I can at least ensure that my children will go back to eating organic food, free from chemicals." 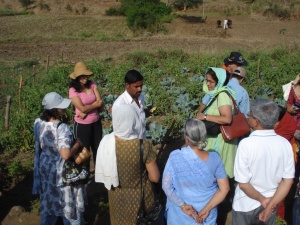 In any organic farm produce marketing arrangement, one of the most crucial aspects is to instil confidence in the consumer that the crop has been grown using only organic inputs. The conventional way in which this is done is through third-party certification. But this method is very costly, as it involves highly paid consultants who fly in to verify the farmers' practices. Gorus has rejected this system partly because of the high cost, especially since many of their member farmers are essentially small farmers. Instead, they have devised a system which they call Peer Certification.

In this system, three times a year, one representative of the farmers, and one staff member from Gorus takes a round of every field to check that only organic farming methods have been used. Interestingly, some of the key staff is part time staff and part time farmer, so they have the direct experience of organic farming. Hence, as farmer and part-time Gorus staff Raju Phale says, "We go around and visit all the farms regularly to check, and we can easily look at the crop and identify if anyone had used chemicals." Moreover, the group interacts several times and the staff is also meeting farmers regularly. Gorus also organises interactions between consumers and the farmers. All this ensures a peer and moral pressure on the farmer.

The most important thing about the Gorus system is that it is a system based on human interaction, building a community and nurturing it. Its strength and credibility derives from this. However, this is only possible in small systems. Gorus recognises this, and in fact, Ashwin Paranjpe says that limiting their size is a part of their vision. "Our vision is to have on this location a renewable energy based food processing unit, and eco-friendly farmer-consumer relations. We would like to restrict ourselves once we have about 200 families as consumers and about 50 farmers as producers. This will allow optimal use of our resources, and also maintain our strengths. After that, we will invest our time and energy to transfer our experience to other groups interested in replicating it."

And while he himself cautions that the Gorus model is not a universal model but that each group would have to evolve solutions appropriate to their situations, clearly, the basic principles and values on which Gorus is structured have a wide relevance.