Summiya Yasmeen finds critical opinion has focused understandably on disparities that mark India's progress, and the nation's young people too are keenly aware of this.
01 March 2004 -

Its widely being hailed as the masterstroke which will sweep the major constituents of the ruling NDA (National Democratic Alliance) coalition  and particularly its largest party, the BJP  back into power in the general election scheduled for April. The ubiquitous multi-media India Shining advertisement campaign which sports the distinctive finger-prints of BJP master strategist Pramod Mahajan, has received widespread acclaim in the media as a trump card which will help the BJP break the electoral bank.

But then the media would acclaim  and find reasons to acclaim  this unprecedented media blitzkrieg. It is an estimated Rs.400 crore richer for it. Never mind the small detail that the nations legal (and illegal) taxpayers are paying for it. The central theme of this massive Rs.400 crore media blitz is that all sectors of the Indian economy  agriculture, industry, services, education, roads, health etc  have recorded unprecedented growth and progress during the past five years that the NDA has ruled in New Delhi. In short the people of India have never had it so good, is the message.

Undeniably theres some substance in the governments campaign. Annual GDP growth has averaged 6 percent plus during the past five years and is nudging 8 percent this year; the countrys foreign exchange reserves have risen to the highest ever $106 billion; India is emerging as a force to reckon with in IT, steel and automotive ancillaries markets overseas; telecom density has risen from 20 to 40 million connections; and perhaps most strikingly (according to one India Shining campaign ad), against 11 km per year during the past 50 years, national highways are being constructed at the speed of 11 km per day. Shopping malls, multiplexes, five-star hotels, luxury spas and sleek automobiles apart from a dazzling array of luxury new products offer citizens a never-before plethora of goodies.

In Indias case, there are two nations. One is India Shining, which the government keeps harping about, but the other India is one where even basic human needs are not being met. While Indian officials have been touting last years 8 percent economic growth, during the same year 1.25 million children below the age of one died, around 50 million children were out of school and half of Indias children were malnourished."

But considerations such as the taxpayer being made to foot the India Shining campaign apart, there is growing disquiet about the self-congratulatory, conspicuous consumption tone of the ad campaign and in particular about its fudging the issue of the NDA governments (the BJP is widely regarded as a middle class traders party) poor rural development record. Increasingly Mahajan & Co are discovering that the clever India Shining campaign is a two-edged sword. With liberal Indias formidable intellectuals beginning to question the premises of this glaringly expensive feel-good ad campaign, there is sudden fear within the BJP that it may blow up in its collective face.

"India is only shining for a small section of society, for the posh middle class strata and above. The incomes of these people have risen, while for the vast majority unemployment is growing. Many new private/ NRI funded hospitals have sprung up but conditions in public hospitals are abysmal. Government schools remain neglected while a growing number of luxury private schools offering foreign certification are sprouting across the country. There are new cars with a whole array of safety and luxury features, but public transport is still terrible. Most public services remain neglected and the majority of citizens dont have access to basic amenities like clean and safe drinking water. Given these vast glaring inequities, how can one say India is shining?" asks Dipankar Gupta, professor of sociology at Jawaharlal Nehru University, Delhi.

Prof. Guptas observations are supported by the United Nations advocacy group U.N. Millennium Campaign which recently opined that shining India will be hard-pressed to meet any of the Millennium Development Goals (MDGs) to which it is committed, by 2015. The goals include eradicating extreme poverty, achieving universal primary education, combating HIV/AIDS and reducing child mortality. 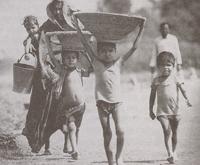 "In Indias case, there are two nations. One is India Shining, which the government keeps harping about, but the other India is one where even basic human needs are not being met. While Indian officials have been touting last years 8 percent economic growth, during the same year 1.25 million children below the age of one died, around 50 million children were out of school and half of Indias children were malnourished," says Salil Shetty, Millennium Campaign director and former chief executive of ActionAid, the well-known London-based non-government organisation. Shetty has been particularly critical of the Union government spending $800 billion per year (a 50 percent under-estimate) on defence, when $900 billion (Rs.40,000 crore) annually would ensure the achievement of the MDGs.

In particular the NDA government and the India Shining campaign gloss over the low priority given to education in a nation in which 500 million citizens are below 19 years of age. According to the Economic Survey (2004) statistics, for the first time in recent memory the aggregate national (centre plus states) outlay for education has dipped below the 3 percent of GDP threshold, plunging from 3.6 percent in 1996-97 to 2.8 percent of GDP in 2003-04.

Not surprisingly the NDAs (actually BJPs) solitary advertisement trumpeting its educational record  unlike other sectoral ads which bristle with numbers and statistics  is long on hype and conspicuously silent about numbers. "For Indias students these are brilliant times with rapidly rising literacy, more schools, new colleges, globally famous IITs and IIMs and a vast spectrum of IT, media, film and fashion institutes, life is radiant with new opportunities... Build your dreams, spread the enthusiasm and make India stronger and shine even better," says the education component couched in generalities of the India Shining campaign.

Meanwhile the ground reality is that the Union HRD ministrys ambitious Sarva Shiksha Abhiyan (SSA) or Education For All (EFA) programme launched in 2003 following the passage by a unanimous voice vote in Parliament of the 86th amendment to the Constitution of India, which makes it compulsory for state governments to provide elementary education to all children between the ages of six-14, has proved a non-starter. According to the National Alliance for the Fundamental Right to Education (NAFRE), an umbrella organisation of 2,400 NGOs, of the Rs.9,800 crore committed by Parliament to SSA (to be matched by state governments), only Rs.1,500 crore has been allocated.

"This campaign is unethical in its timing. The government is using it to derive electoral advantage which is not right. Apart from this I see nothing wrong with it. In fact after all these years of the country being run down, I feel that its good to praise ourselves."  •  Progress by any measure

Consequently even positivists within the tribe which teaches the dismal science that is economics who believe that the contents of the glass half-full need to be appreciated and celebrated, tend to be lukewarm about the national rollout of the unprecedented India Shining advertising blitzkrieg. Comments Ashima Goyal, professor of economics at the Indira Gandhi Institute of Development Research, Mumbai: "The Indian economy is recording consistently higher economic growth than in the past and this needs to be celebrated. But I do feel this campaign is unethical in its timing. The government is using it to derive electoral advantage which is not right. Apart from this I see nothing wrong with it. In fact after all these years of the country being run down, I feel that its good to praise ourselves."

Yet even as pundits debate the merits and demerits  and timing  of the Rs.400 crore India Shining campaign, in the cacophony boosted by strident electoral campaigning for the general election scheduled for April, the voice of young India  the other half of this billion-strong country  has been drowned. Despite the United Nations Convention on the Rights of the Child (1990) to which India is a signatory specifically stipulating that the views of children be "given due weight in accordance with the age and maturity of the child" (Article 12 (1)), their opinions on subjects of national importance are seldom solicited. To ascertain the views of young India, EducationWorld correspondents across the country interviewed the head boys and head girls of independent and government schools to elicit their opinions about the India Shining campaign.

The questions put to the youngsters were:

The answers received are as follows: