But don't be a zero

The world moves to the tunes of two kinds of men: the great kind and the evil kind. The rest of us are somewhere in between. But what heroes and Neros both get us zeros to do is ask questions, says Dilip D'Souza.
09 March 2005 -

A bureaucrat I know held a number of posts that, judging by a file he kept, all had one interesting characteristic: they made people want to write him letters. The file is full of such letters, from all through his 30 plus years in the Indian Administrative Service (IAS). He calls it "Howlers" because, well, the letters made him howl with laughter. Not quite the reaction the letter-writers had expected, sure. But then he did respond to them too, when required -- and saved a copy in the "Howlers" file.

One correspondent, I'll call him Ramakant, was a compulsive writer. The file contains several letters from him, on a variety of subjects. He once wrote to Indira Gandhi, congratulating her on becoming Prime Minister. I'm not sure why Ramakant sent this officer a copy. But I'm glad he did, because it contains this wise advice: "Be a Hero or a Nero, but don't be a Zero."

Now I laugh at this -- or howl -- as the officer did and as perhaps you do too. (Don't know about Indira). But I also find something serious in that line. What I think Ramakant meant is that the world moves to the tunes of two kinds of men: the great kind and the evil kind. The rest of us are somewhere in between, zeros who will never make much of a difference to anyone or anything.

There's nothing intrinsically wrong with being a zero -- that's just the way the world is. Ramakant was saying, if you do want to make a difference, you have to be either very good or very bad. Great or evil. A hero or a Nero. Zeros live their lives in anonymity and are then forgotten. 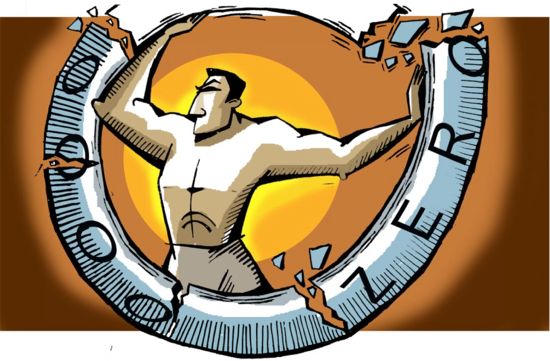 Not that people should be Neros, let's be clear. The sole point here is about making an impact. Try this: make a list in your mind of the people who have had some impact on you, whether good or bad. Did the corner-store owner figure on your list? The driver in the last bus you rode? Me?

No, because most of us -- and again, I'm hardly disparaging anyone here -- are zeros.

And so I want to consider two men who did make an impact. What impact -- and whether they were therefore heroes, Neros or zeros -- is your call.

First, rewind to 1980, when an undistinguished Bihar town shot into the national headlines. A petition in the Supreme Court and, later, a deluge of newspaper coverage brought to public notice something that had happened there a year earlier.

This happened: the police in Bhagalpur pulled ten undertrial prisoners from their jail and poked bicycle spokes into their eyes. In some cases, twice. Then, just to make sure they had done a good job, they poured acid into the poked out eyes.

Indeed, it was a year before this was known in the rest of the country. After the press coverage, the then Prime Minister, the same Indira Gandhi, called the then Chief Minister of Bihar, Jagannath Mishra. She was "sickened" by this atrocity, she told him. He had to take action, she told him. Reluctantly, Mishra suspended 15 policemen and ordered an inquiry.

But this brought an unexpected reaction. People in Bhagalpur took out protest marches supporting the policemen. They contended that the blindings were more effective punishment for the undertrials than the legal system could ever deliver.

Jagannath Mishra's legacy : official after official refuses to take action on one or another crime, citing that the criminals are popular, and therefore must not be punished.

Jagannath Mishra swiftly shut down the inquiry. He also announced that he could not punish the cops because the blindings had -- witness the marches, remember the phrase -- "social sanction."

But here's the problem: we don't elect Chief Ministers to govern based on "social sanction." We elect them, and they take an oath, to uphold the law. Period. In this case, the cops broke the law. They should have been punished. Period.

Yet Mishra, with his statement, set a precedent that is widely followed today. Official after official refuses to take action on one or another crime, citing the possibility of an adverse public reaction -- thus implying that the crime has social sanction. That the criminals are popular, and therefore must not be punished. You might say it is at least partly Jagannath Mishra's legacy that we slide faster and faster into anarchy and crime. Many lawbreakers are now themselves ministers and lawmakers.

You might wonder, is there social sanction for such a slide?

Second, rewind to World War II, when a US Marine called Eugene Sledge fought the Japanese in the Pacific. This was an especially brutal and messy war: as the Americans got closer to Japan, island by blood-drenched island, the Japanese fought harder. Sledge was there, fighting and keeping notes on his experiences on scraps of paper that he folded away in his Bible. After the war, he turned those scraps into a book called "With the Old Breed."

Now this is not literature. It's just honest writing from a decent, ordinary man. That makes it a searing record of war, for me one of the finest war memoirs in existence.

Here's one episode from Sledge's book. After a battle on Peleliu island, a Marine came up dragging what Sledge assumed was a Japanese corpse. Only, the man wasn't dead. He "had been wounded severely in the back", writes Sledge, "and couldn't move his arms." The Marine sat down with the wounded Jap. Took out his kabar, his Marine knife. Began ... but here, in full, are Sledge's own words about this incident:

"The Japanese's mouth glowed with huge gold-crowned teeth, and his captor wanted them. He put the point of his kabar on the base of a tooth and hit the handle with the palm of his hand. Because the Japanese was kicking his feet and thrashing about, the knife point glanced off the tooth and sank deeply into the victim's mouth. The Marine cursed him and with a slash cut his cheeks open to each ear. He put his foot on the sufferer's lower jaw and tried again. Blood poured out of the soldier's mouth. He made a gurgling noise and thrashed wildly. I shouted, 'Put the man out of his misery.' All I got for an answer was a cussing out. Another Marine ran up, put a bullet in the enemy soldier's brain and ended his agony. The scavenger grumbled and continued extracting his prizes undisturbed.

Such was the incredible cruelty that decent men could commit when reduced to a brutish existence in their fight for survival amid the violent death, terror, tension, fatigue and filth that was the infantryman's war."

It's not that we didn't know it was a brutal war. But one myth Sledge exploded about the Pacific war was that the brutality was all Japanese. He makes no bones about their atrocities, but he is also utterly frank about what his American buddies were doing. War does this to decent people, he says, and you get the feeling he is wondering when it will happen to him.

A hero's legacy : Eugene Sledge exploded a myth with his book; the one about the glory of war.

But there's a second, related myth Sledge also exploded with his book: the one about the glory of war. Sledge's infantryman view of war tells the truth -- there is no glory, that words like that are just fiction our leaders save for the rest of us. And in fact, if there's a war memoir by a man who has actually been in the dirt of fighting that talks this language of glory, I'd like to know about it.

This is Sledge's legacy: that he got people to ask questions about waging war. For me, that's the true worth of his disturbing book.

And that's what heroes and Neros both get us zeros to do: ask questions.

Here's one more passage from Sledge, his thoughts after one more bloody, filthy battle.

"I recalled some of the eloquent phrases of politicians and newsmen about how 'gallant' it is for a man to 'shed his blood for his country' and 'to give his life's blood as a sacrifice,' and so on. The words seemed so ridiculous. Only the flies benefited."

The flies. Remember them.

Dilip D'Souza writes regularly on the living conditions of India's downtrodden people. He is a regular columnist with rediff.com. He is also the author of two books Branded by Law: Looking at India's Denotified Tribes [Penguin 2001], and more recently, The Narmada Dammed: An Inquiry into the Politics of Development.

BACK TO SCHOOL : Meaningful restart of education is critical
MORE ARTICLES
on similar topics ...
DILIP D'SOUZA