The CERC is mandated with balancing the interests of power generation companies and their consumers. But it appears that its new regulations are heavily skewed against the latter. Shripad Dharmadhikary reports.
14 March 2009 -

Consider this - a new grocery shop is opening up in your neighbourhood. The shop owner has estimated his likely sales from the patronage of you and your neighbours, and assured himself that his business will be viable. But to be on the safe side, he would like a small guarantee from all of you - in case the sales at his shop don't match his estimate, he would like you to make up the difference to him, anyway. I.e. he would like an assurance from you (with a financial guarantee) that his shop will be successful.

Sounds absurd, doesn't it? But it's quite real too - for anyone setting up a hydropower plant, this is exactly the guarantee that will be offered for the first ten years of operation. On 20 January 2009, the Central Electricity Regulatory Commission (CERC) has recently declared the principles and formulae for determination of tariff for electricity from thermal as well hydroelectric power stations (in this article we will only deal with provisions applying to the hydropower sector) during the next 5 years, i.e. 2009-14. These regulations will apply, from 1 April 2009, to all generating companies owned or controlled by the Central Government, as well as others, including private developers, who operate in more than one state.

The CERC is mandated with balancing the interests of all the stakeholders in the sector, including the generation companies and the consumers. But it appears that the new regulations are heavily skewed against consumers, and will also have larger public interest implications.

These regulations represent a 'cost-plus' approach to setting tariffs. In such an approach, the tariff is based on the recovery of all the costs incurred by the generating company, plus an assured profit. On the face of it, it may seem reasonable to presume that an investor should recover his costs of establishing and operating his power plant, but in practice this can lead to cost-padding. Investors, certain that the approach to tariff-setting will cover their costs, can inflate their costs artififically, so as to be able to claim a higher tariff and thus siphon off funds. 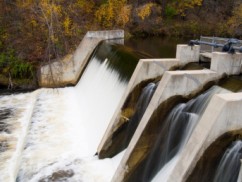 The quality of hydrological data in India is often poor. If projects do not have to bear the hydrological risk, they would be content to use low quality data by erring on the higher side.

•  Power to the rich
•  PPPs: Tall claims, no evidence

There are some safeguards built into this. According to the regulations, "The capital cost admitted by the Commission after prudence check shall form the basis for determination of tariff", and "... the Commission may issue guidelines for vetting of capital cost of hydro-electric projects by independent agency or expert." Thus, the CERC, or some independent experts may carry out audits to assess the accuracy of the capital costs. Will these checks be effective in addressing the problem of cost-padding? That remains to be seen.

One important component of the capital costs has been laid down by the CERC as the "cost of approved rehabilitation and resettlement (R&R) plan of the project in conformity with National R&R Policy and R&R package as approved". Unfortunately, the provisions of the National R&R Policy are extremely weak and are unlikely to result in adequate and just resettlement and rehabilitation. Limiting the allowed capital costs to only those of measures in conformity with the National R&R policy has created a strong barrier to any liberalisation of rehabilitation provisions by individual projects.

The regulations also provide an assured 15.5 per cent rate of return on equity for hydropower projects, and an additional 0.5 per cent if the project is completed in time, taking the total to 16 per cent. Various incentives are available in addition to this, totalling to handsome returns. It is argued by hydropower developers that they need these high returns to offset what is essentially a high risk business. However, these new regulations protect the developers from many of the risks, including one of the major ones - namely the hydrological risk - and pass it on to the public at large.

The new regulations now provide that in case the energy generation in any year in the first ten years of operation is less than the design energy, the project will still get paid for the full design energy. Since the actual energy dispatched is lesser, the consumers will end up paying at a higher rate for the electricity. In the process, the hydrological risk (of the water flow in the river being less than anticipated) is transferred to the consumer. And even after the 10th year, only 50 per cent of the hydrological risk is borne by the project developer. Significantly, the converse does not happen. In years when the flow in the river is higher, and the electricity generated is higher than the design energy, the project promoter gets to keep the charges recovered from the sale of the increased electricity generated.

When the project is carried out by a public sector company, the increased profits are at least presumably used in larger public interest. In case of private sector generation companies, this represents a clear case of the public bearing the risks, while the private sector walks away with the profits.

This is not only an issue of higher profits and offloading of risks by some companies; there is also a larger problem. Shielding hydropower generation companies from hydrological risks offers a perverse incentive to build in higher design energy into the project. Further, the quality of hydrological data in India is often poor. If projects do not have to bear the hydrological risk, they would be content to use low quality data by erring on the higher side. This would lead to higher design energies than what the river flows can support, with larger storages and heights for dams, leading to larger submergence, higher displacement and more environmental damage.

Indeed, such an over-design of projects is seen clearly from an analysis of existing hydropower projects carried out by Himanshu Thakkar of South Asia Network on Dams, Rivers and People (SANDRP). Thakkar's analysis of 22 years' electricity generation data of 208 projects (30,740 MW) of the 228 operational projects in India as of 31 March 2007, shows that power generation at 184 of them was below the design energy. The total capacity of these 184 projects is 25,214 MW - that is, 82 per cent of the total analysed capacity is under-performing. What is most important is that the actual 90 per cent dependable generation achieved by 90 of these 184 projects was less than half the design energy.

This means that projects have been heavily over-designed, and river flows over-assessed. Considering that an overwhelming proportion of the proposed hydropower capacity addition in India is in the North-Eastern states where there is higher uncertainty in hydrological data, protecting projects against hydrological risks is a sure way to encourage over-designing of projects.

The issue gets complicated when one considers that hydropower companies are eligible for income tax holiday. The CERC states that it wants the benefit of the income tax holiday to be available to the project developer and not passed on to the consumers. While the exact interpretation may require clarification, it appears that this provision will lead to the piquant situation where the tax amount is collected by the project from the consumers of electricity by loading the same on to the tariff, but not passed on to the Government but rather retained by them.

The new tariff regulations issued by CERC continue a trend of offering large concessions to the hydropower sector with the justification that rapid development of hydropower is urgently needed. The same trend is visible in several policy initiatives including the new Hydropower Policy of Government of India announced in 2008 (see earlier article here). However, it appears that these measures are likely to end up in making the electricity from hydropower more costly, transfer the risks to the public, and pave the way for huge profits for hydropower corporations.