Government itself to blame for backlog of cases

The state is by far the biggest litigant, and contributes a large part to the staggering backlog clogging the courts. The Centre, States and public sector companies determinedly appeal every adverse verdict, despite winning only a small minority of them eventually. Kannan Kasturi reports.
25 March 2008 -

In 1994, a clerk of the Central Public Works Department was fatally injured in a road accident involving an Army vehicle used by the Chief of Army Staff. His widow Rajwati, filed suit against Army Head Quarters and the Defence Ministry for compensation, which she was awarded 14 years later, in March 2008.

If her story is so familiar, it is because she is one among millions of Indians who are forced to engage in an unequal battle with the state - the Central Government, a State Government or one of their myriad corporations - spending years, even decades seeking justice.

The state is by far the biggest litigant in India, and contributes a large part to the staggering backlog of civil suits - over 10 million at last count - clogging the courts. The extent of Government involvement in litigation was acknowledged by Prime Minister Manmohan Singh at a conference of Chief Ministers and Chief Justices in 2004. He revealed that a sample survey conducted in Karnataka found that in 65 per cent of civil cases, the Government was a litigant, sometimes on both sides. He observed that "Government litigation crowds out the private citizen from the court system." There is little reason to assume that things have changed since then; the Chief Justice of India himself has drawn attention to Government litigiousness on numerous occasions in recent days.

What are the common subjects of litigation between a citizen and the state? One finds that matters relating to compensation for acquired land, taxation and labour disputes, and violations of terms of service and motor vehicle accidents claims figure prominently. Citizens are very often forced to litigate to seek remedy for administrative wrong-doings - workmen suing to get the provident fund or insurance that is their due, or for a direction that labour laws be implemented by the Government; employees fighting for their pensions; farmers demanding reasonable prices for their acquired lands, and accident victims seeking compensation from state-owned insurance companies and transport corporations.

It is bad enough that a citizen is forced to approach the courts against the state; worse still is the tendency of the state to automatically appeal against adverse decisions to a higher court and to relentlessly pursue litigation all the way to the highest possible level, even up to the Supreme Court. The Prime Minister, in the speech referred to earlier, also confirmed that the Karnataka survey found much of the government litigation to be in the form of appeals, and that 95 per cent of Government appeals failed. He observed: "In a way, they are appeals that shouldn't have been made in the first place."

The case of Mareppa, Narsappa, Sawaranna & Ramana, four farmers belonging to Mehboobnagar district of Andhra Pradesh is typical. Their lands were acquired for the Priyadarshini Jurala project in 1988. The Special Deputy Collector for the project passed a compensation award in 1989. The farmers sought reference to a Civil Court as they were not happy with the award. The Court of the Senior Civil Judge, Gadwal, Mehboobnagar District enhanced the compensation in 2002. The state however appealed to the High Court in 2003. The appeals were dismissed by the High Court in 2005. This time, the state did not appeal again, but the Government did not pay up and the farmers were again forced to approach the court! At a hearing on 28 August 2007, the court chided the Government and ordered it to deposit the compensation amounts within seven days.

Other citizens suffer a worse fate, dying before their claims are settled. Jammanna and Balamma, whose lands were also acquired for the project did not manage to outlive the litigation. Their sons have continued to pursue the compensation which was awarded by the Court of the Senior Civil Judge, Gadwal, Mahbubnagar District in 1996. At a High Court appearance on 6 December 2007, the lawyer representing the state requested for more time to 'get instructions' from the Government. The Court granted more time with a threat to summon the Secretary to the Government for explanations if the matter was not settled by the next date of hearing.

Thus, two decades have passed for these farmers without compensation for the lands that have been taken away from them. The dilatory tactics of the Government are visible at every step. Even after all appeals have been exhausted, Court orders to make payments are blatantly flouted by the Government. 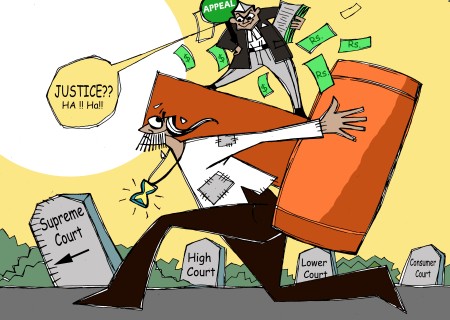 Another area of much avoidable litigation is compensation for motor vehicle accident victims. In the words of the Law Commission, which undertook a detailed review of litigation by public sector undertakings and the Government 20 years ago, "compensation for victims of accidents is a measure of social justice in as much as the bread winner may have been killed and the family become destitute". But state owned insurance companies and transport corporations act with utter callousness. Insurance companies do not settle claims even in cases where they have admitted their liability, forcing victims to approach the accident claims tribunal. State Governments whose fleet of buses are exempt from the liability of third party risk insurance fight their cases with utmost vengeance and even up to the Supreme Court.

The long queue of cases and the consequent delay in spite of having specialised accident claims tribunals is evidence of this litigiousness. In Delhi, for example, many cases admitted in 1996 or even earlier are coming up for hearing only now.

Of accountability and motives

The Law Commission found that there was much avoidable litigation by the state; it pointed to the many instances where the judges found that citizens were compelled to litigate because of the "utter indifference" of the government; where government pursued litigation on "frivolous" grounds, as a "matter of prestige" with an attitude of "vengeance" or "callousness bordering on vendetta", displaying "arrogance and a superiority complex".

Disputes relating to the valuation of acquired land have become a predictable source of litigations with Government as a party. The colonial Land Acquisition Act allows a land owner to go to Court if he is not satisfied with the compensation offered by the Government. Invariably, the Government offers compensation that is patently unreasonable forcing the farmer to litigate. Speaking about compensation related to land acquisition by the state at a workshop on 1 March 2008, the Chief Justice of India is reported to have observed: "Our system is encouraging litigation. Why should the Government not come forward with a proper structure so that people get adequate compensation and only a fraction of people would approach courts then?" (Indian Express, 2 March 2008)

Speaking of the officials responsible for litigation, the Law Commission opined that "the lack of accountability of the officer in whom the power vests to initiate litigation or perpetuate the same by preferring appeals, is largely responsible for mounting litigation ... cases are not unknown where corrupt motives may be at the root of the tendency to continue litigation so as to exhaust the other side in the fond hope that he/she/it may, out of exasperation, be willing to grease the palms. There is a third independent cause generating this tendency to initiate or perpetuate litigation and that is to avoid taking decisions ..."

In its recommendations, the commission pointed to the need for mechanisms to resolve disputes between Government and the public through arbitration or compromise before going in for adjudication and gave a number of specific suggestions. These included making it mandatory for the Government to offer to submit to abitration before a suit was filed in court against it; grievance cells, with employee representation, in all state corporations to resolve disputes related to employees; and continuous oversight of volume and quality of Government litigation by a parliamentary committee to introduce greater accountability in officers responsible for litigation.

But, twenty years after the Law Commission's incisive report, there does not seem to be any change in the profligacy of Government litigation. India has seen major transformations in many areas during these years. But few of these changes have been in government itself, and the colonial mindset that set the bureaucracy apart from and above the ordinary citizen still continues.

Not a level playing field

The inordinate delays in resolving disputes in the Courts have led to exploration of alternate dispute resolution mechanisms. Lok Adalats provide an official process for reaching agreements between disputing parties through compromise; once reached, the agreement is final and cannot be appealed in any Court. Lok Adalats are being hailed as the poor man's forum, favouring the citizen who cannot afford the cost of lengthy litigation. Special Lok Adalats focussing on a particular area of litigation such as Accident Claims or Land Acquisition settlement are also being increasingly organised. These moves appear to concede that the existing courts cannot eliminate the delays, but even if dispute resolution in the Adalats is speedier, it is arguable whether both parties bend equally to compromise.

The High Court-sponsored Lok Adalats organised for settling land acquisition related claims connected to the Somasila Project in 2006 are illustrative of the benefits and the cost to the individual. Payments to farmers for acquired land had been pending from 1985. Farmers were exhorted by the Adalat organisers, before the proceedings began, to be 'reasonable' in their compensation expectations so that a settlement could be reached. Government compensation cheques were to be immediately distributed to those who agreed to a settlement.

These farmers had already spent 20 weary years in litigation, paying for court fees and for lawyers, and spending their time, and they were up against the Government which had everything on its side - money, legal expertise and of course, the luxury of unlimited time. The farmers were the aggrieved party, having lost their land but not received any compensation. Some farmers agreed to settle, but the question remains - was the setting fair, for a mutual compromise?