Communities along the Shnongrim ridge are caught between the plans of mining companies and their own traditional livelihoods. Some are changing their minds, while others despair. Sonata Dkhar reports.
12 November 2010 -

"Why should they come? They have their land and we have ours - they don't have the right to take our land" retorted Mei, an old lady from Nongkhlieh elaka of Jaintia hills in Meghalaya, on being asked about the coming of the cement plants and the coal miners to their area.

More than a year ago, this was a commonly-shared sentiment in all the agricultural communities of the nine villages situated in what is also known as the Shnongrim ridge. Bah Karlin Phyrngap, who hails from Shnongrim village and has been voicing concerns for the area, says that "we may be poor and our area may be very small but all the people here make a living off their land. God has blessed this land and it bears fruit ... but if the government allows industries to flourish all this land will be destroyed".

His fears are now slowly but surely becoming a reality. The beginning was the clearance given for setting up Cosmos Cements Ltd after a public hearing in 2009, despite objections from all the nine villages of Nongkhlieh Elaka. Though the company is situated in the adjacent Sutnga area (a disputed area according to the people of Nongkhlieh), the 230-hectare captive limestone mines proposed for the plant are located on the Sutnga-Nongkhlieh ridge.

For a few, the coming of cement plants and mining will assist in bringing development to the area, but Bah Karlin is fast to question this development. "It may be economically viable - but we are just 1000 people. When a factory is set up 10,000 people will come, who will benefit from the schools, health centres and other things they set up? Not us, they will end up destroying our land, and pollute our environment, we may not even get water to drink", he says.

Bryan Daly Kharpran, general secretary and founder of the Meghalaya Adventurers Association, who has been caving in the ridge for 10 years now, is melancholic when he talks about hearing and sighting a group of hillock gibbons at Lum Thangbrew (a hill situated a slight distance from the caver's temporary camp). "Earlier, there was forest cover all around and one could hear wild animals, but now you can't hear them, the land is barren", he says. Fellow spelunker Simon Brooks, who is from the United Kingdom, has also observed the drastic changes when he tells us that "In 1999 there was twice as much forest cover in the Shnongrim Ridge. Now there is just so much difference".

The area has approximately 400 million tonnes of limestone deposit which is just a few feet below ground level and coal deposits further below.

Nongkhlieh Elaka, which is in the north east of Jaintia hills district is now a scarred land. Gargantuan mining equipment, heaps of coal and limestone, barren open lands and felled trees are now characteristics of what once were vast expanses of open and dense forest along with green grasslands. Scarcity of water has become an issue in an area which is the catchment for some of the rivers of Jaintia Hills, since many of the springs are drying up because "of the lowering water table" according to Bryan Kharpran. Shortage of rainfall and erratic rains also add to the existent water woes.

The area has approximately 400 million tonnes (inferred) of limestone deposit which is just a few feet below ground level and tonnes of coal deposits below, attracting several miners and cement plant owners. Though coal mining and limestone quarrying has had a fastidious growth in Jaintia Hills, Nongkhlieh has been one of the few areas that resisted the industrial owners.

But this opposition is finally witnessing large fissures - in particular, because of the changing attitudes of the people. 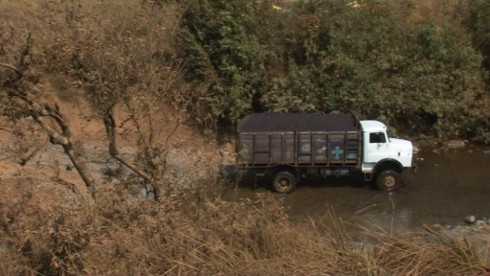 Mining truck on the Letein river.

In 2009, Bah Jo (name changed) was a jovial middle-aged man who seemed content with the life he was leading and was happy to take us around the rift passages and the different areas of the elaka. "If the companies come and we sell our land to them we are at a loss, because all our cultivable land will go" as he firmly spoke out against the coming of cement companies and coal mining in the area.

Today he is a changed person. Quiet and distant, he hesitantly welcomed us to his home. The cleared and cut hill adjacent to his home is witness to the transformation; as we later found out that it was cleared for dumping coal. Even though it may be difficult to comprehend such drastic alterations, they are an actuality.

On 16 April 2010, a letter addressed to the Executive Committee of the Jaintia Hills Autonomous District Counil (JHADC), signed only by the Rangbah Shnongs (village headman) and secretaries of six of the nine villages of Nongkhlieh stated their stand against the No-Objection-Certificate given by the Doloi (headman) of the elaka for the establishment of a cement Plant by Lafarge. Five months after, one of the villages, Lumthary, retracted stating they didn't have any objections to the Lafarge proposal, and a month later another village followed.

The reasons for such changes are many and quite complex. But in their wake the changes are also throwing up discordance among the people, which is further obfuscating the issue of mining and environment. Nongkhlieh elaka is now being marked by a never-before-seen conflict within its very social structure, and the land and environment are paying the price for it.

Bah P Ryngab attributes the state of being choice-less as one of the main reasons. "I may not allow it and may not want to give away the land, but if the village elders decide otherwise then what can I or any one of us do" he asks, rhetorically. But others have a different view. Bah Mul Pajoh, who resides in Lum Tongseng village, feels differently. According to him, if he gets the opportunity to mine coal then why shouldn't he "if I can earn a little more money".

According to H H Mohrmen, an environmental activist in Jowai, changing religious views are also partially responsible for the callous attitude of the people towards the environment. With the advent of Christianity, the closeness to nature which was part of the earlier traditional form of worship, has been slowly fading. In places like Raliang elaka, where old traditional ways still carry on, the land is marked by thick and dense forest and scores of paddy fields, unlike in the mined areas. But Nongkhlieh is also not immune from the changes around it - villagers there are witnessing the desecration of their Wah Letein (river) as excess water from the mines is directly let out into the river, which once was worshipped as a deity.

Whatever the reasons, there is no denying the changing attitudes to traditions as well as livelihoods, and by implication to the environment as well. The worries haven't gone away, but the process seems inexorable. And As Bah Karlin Phyrngap puts it "If they take away our land, rocks, trees, they are taking our brothers and sisters away from us ... we will die". But the number sharing his sentiment seems to be is shrinking.

Sonata Dkhar is an independent film-maker, based in Shillong. She received the Panos Fellowship on Climate Change Reporting for 2009-10.