MIS = Too many mistakes!

The CAG Audit of the MGNREGS reveals serious irregularities and glaring discrepancies in the data in its MIS and actual paper records maintained. Shambhu Ghatak discusses the glitches, especially in the light of findings of several other reports and the National Sample Survey data.
12 June 2013 -

There are three kinds of lies: lies, damned lies, and statistics. And the last one seems to hold true for the Management Information System (MIS). Once praised by development thinkers for making data transparent and available in the public domain to be equally accessed by all, thus ensuring Section 4 (1) of the Right to Information (2005) Act, the MIS for monitoring NREGA at the Gram Panchayat (GP) level has come under intense criticism from the Comptroller and Auditor General (CAG) audit report number 6 of 2013.

The CAG report on the Performance Audit of Mahatma Gandhi National Rural Employment Guarantee Scheme (MGNREGS) came down heavily on the MIS of the job scheme for irregular data entry made in various states and errors in the database. The CAG found the MIS data on physical and financial performance of NREGS to be unreliable. 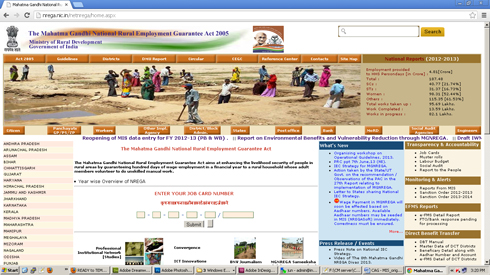 In its Second Performance Audit of MGNREGS submitted to the Parliament on 23 April, 2013, the CAG discussed large discrepancies between the data uploaded in the MIS and the actual paper records maintained or information available with the Department/ District Project Coordinator (DPC). The Government’s e-governance effort for transparency and efficiency concerning MGNREGS is at stake since discrepancies in data were observed in all types of records including number of households registered, number of job cards issued, job card number, employment demanded, employment provided, number of works, expenditure etc. Therefore, the question that can be evoked is whether the MIS is capable of real time monitoring of the MGNREGS.

Noticing unsatisfactory monitoring at the Central level, the Audit found that the Central Council did not fulfill its statutory mandate of establishing a central evaluation and monitoring system, even after six years of its existence. Deficiencies, relating to both non-maintenance and incorrect maintenance of prescribed basic records, were noticed in 18 to 54 per cent of all test checked gram panchayats, for various types of records.

In its Performance Audit Report Number XXXX11 of 2008 of the NREGA, the CAG noted that the absence of Gram Rozgar Sewaks adversely affected the maintenance of basic records at the gram panchayat level, without which it was impossible to verify employment demand and allocation for each household.

Noticing unsatisfactory monitoring at the Central level, the Audit found that the Central Council did not fulfill its statutory mandate of establishing a central evaluation and monitoring system, even after six years of its existence. Deficiencies, relating to both non-maintenance and incorrect maintenance of prescribed basic records, were noticed in 18 to 54 per cent of all test checked gram panchayats, for various types of records.

CAG report: Problems in the MIS

Some of the discrepancies observed by the present CAG Audit are as follows:

The Ministry of Rural Development (MoRD) along with National Informatics Centre (NIC) and other stakeholders, conceptualized the web-enabled MIS-NREGASoft, so as to address the planning & monitoring needs of the MGNREGS. NREGAsoft is a local language enabled, work flow based, e-Governance system and is available in offline as well as online mode to capture all the activities under NREGA at the Central, State, District, Block and Panchayat levels, according to the 2012-13 Annual Report of MoRD. NREGAsoft was prepared and deployed at http://www.nrega.nic.in by NIC in collaboration with MoRD.

Some of the objectives of NREGAsoft as retrieved from the MIS website are as follows:

An IT audit of NREGAsoft by the CAG revealed the following flaws:

Why is MIS preferred in India?

The web-based MIS places all critical parameters such as shelf of projects, sanctioned works, wage payments, number of days of employment provided and works under execution online for easy public access. MoRD’s MGNREGA Sameeksha (2012) report discussed that the MIS captured all information on the beneficiaries (including name, photograph, house location, etc.), works (attendance of beneficiaries, location of work, person-days generated, etc.), expenditure (amount spent on material, amount spent per work, etc.) and other processes and procedures (delays in registration, wage payment etc.). Thus, MIS which provides real time online data was viewed as ideal for the purpose of monitoring because of its reliability.

According to the MGNREGA Sameeksha (2012) report, the Monthly Progress Reports or MPRs were mostly hard copies of progress reports passed from the gram panchayats to the block and then to the district, to be entered online. MIS was preferred over paper-based MPRs since the latter could not be drilled down beyond the district level, which made it difficult to monitor Gram Panchayat-wise performance, issues and expenditure during 2006-07. For FY 2011-12, more than 90 per cent of the total expenditure is available on MIS (including details of beneficiaries etc.). 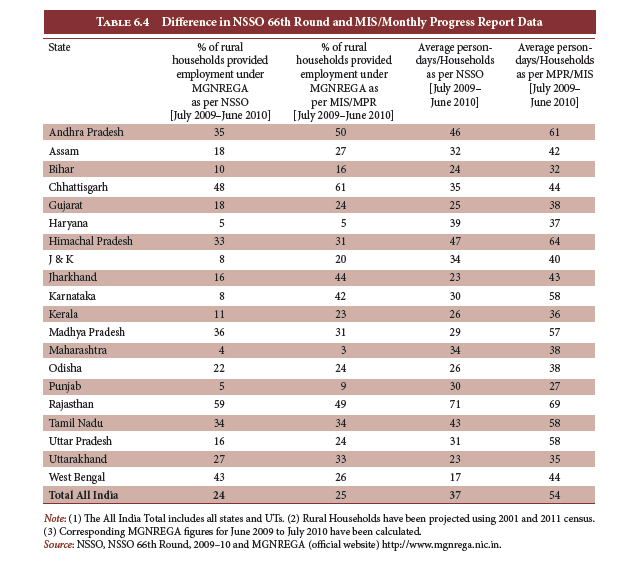 The MGNREGA Sameeksha report disclosed several discrepancies in the data reported by MIS and the National Sample Survey-NSS 66th Round data [July 2009-June 2010].

Clearly, MGNREGA Sameeksha (2012) report made no distinction between MIS and MPR data assuming that all MPR data were correctly digitized into MIS. The same report emphasized that "data on the MIS/MPR is real time, whereas NSSO data is survey data". But the CAG Audit report found discrepancies between the MIS and MPR data as well.

Why do MIS and NSS data differ?

Experts opine that discrepancies take place due to misreporting or tampering with the data. Discrepancies were usually higher in states/UTs with higher corruption in MGNREGA, lower awareness and weaker accountability systems.

By comparing data from the NSS 66th Round and administrative statistics of the MIS, Yoshifumi Usami and Vikas Rawal, in their article titled Some Aspects of the Implementation of India's Employment Guarantee (2012), also found that there was a gap between the number of households that were reported to have job cards and the total number of job cards that were issued.

According to the NSS data, 56.5 million households had job cards, whereas the MIS data showed that a total of 116.4 million job cards had been issued until 2009-10 (see Table 4 titled “Number of rural households with job cards, National Sample Survey and Management Information System of the Ministry of Rural Development, 2009-10”). Since the NSS used a different definition of household as compared to MoRD's NREGA, there was every incentive for beneficiary households to sub-divide themselves and to apply for separate job cards for each family in case of the latter.

However, Usami and Rawal (2012) proved that the discrepancy between the number of households with job cards and the number of job cards issued happened also because the MIS data came from administrative records that were manipulated by local-level administrators. There was a strong possibility that a number of cards were issued officially, but not provided to the households. This was corroborated by their rigorous empirical study which found that as per the MIS data, a substantial proportion of households that officially held job-cards never sought work or worked under the Scheme.

Data from the 66th Round of NSS Survey on Employment and Unemployment also indicated that a substantial proportion of rural households demanded work under MGNREGS, but were not provided any work at all, as recorded by Usami and Rawal. About two-thirds of such households were not given work because they had not been issued job cards. The difference in the MIS data between the number of persons/households who demanded work and the number of persons/ households who were provided employment was very small. The MGNREGA Sameeksha (2012) report too argued that in case of MIS data, one could see marginal differences in number of households who demanded work and those who received work. However, the NSSO data may not be entirely accurate for the same since it is based on a 365-day recall of the beneficiaries. It may not be possible for the beneficiaries to be accurate in recalling information over a period of one year whether they sought work under the job scheme during the last 365 days.

What is to be done?

The rampant discrepancies noted naturally raise questions as to the way forward regarding accurate data reporting with respect to social welfare schemes such as the MGNREGS. On one hand, technology is not a silver bullet for effective implementation and monitoring of MGNREGS. But on the other hand rejecting the MIS outright would be like throwing out the baby with the bathwater. The system should have proper checks and balances. Keeping that in mind, the CAG made certain key recommendations as follows:

The MGNREGA Sameeksha (2012) report acknowledged the problems with the MIS and suggested that more national level survey-based studies are required to verify the authenticity of MIS data.

Shambhu Ghatak is a researcher on developmental issues like hunger, food security and employment.