Although the government has spent large sums of money tackling problems, most social and economic indicators in the country are far short of the goals. Jaydeep Biswas and Debashish Sircar say we need better interim assessments of how money is spent, and social infrastructure to complement physical nation-building.

In his budget speech this year, the Finance Minister P Chidambaram underlined the need to achieve outcomes through budget outlays. He meant that the money spent by the government must produce the desired results; merely provisioning the money, or even spending the amounts that are allocated to specific purposes, does not achieve the results that one expects from them. Since budgeted amounts are really the people's money spent by the government, it is natural that the people expect to obtain results for the public good from such expenditure. This is a fundamental point about accountability in a democracy. People often wonder what happens with the money that the government claims to spend for their welfare. Mr.Chidambaram emphasised the need for obvious results that would answer this question.

A refreshing admission of past failure and need for improvement? Certainly. But why do outlays not produce the outcomes one expects from them? It's easier not to repeat the mistakes of the past if we first understand where we have gone wrong thus far.

To most people, outcomes simply mean results. For example, in a primary health care programme, one desired outcome could be universal immunization of all children before they complete their first year. Another outcome we might seek from such a programme is reduction of maternal mortality, primarily by ensuring that all pregnant women receive at least 3 check-ups by trained medical personnel. Similarly, from public works, an important outcome expected is creation of good physical infrastructure such as roads that provide better connectivity. In primary education, a key outcome is to have all children complete five years of good quality schooling and demonstrate attainment of appropriate learning standards.

And so on. Such improvements are tangible, and therefore easily recognised as good outcomes. But how does one connect these outcomes to the money spent in achieving them? Typically, through the twin elements of effectiveness and efficiency. To be able to achieve a particular outcome, the expenditure has to be properly directed, i.e. the money must be spent on things that are effective in producing the outcomes desired. Also, the expenditure must be efficient, i.e. in the most cost-effective manner possible, and without corruption siphoning off part of the budgeted money.

To understand the links between outlays into outcomes requires a combination of management systems and social processes. One of the effective ways to do this is through a management tool called Logical Framework Analysis (LFA). Also known as 'logframe' analysis, is used widely across the world in project management. LFA helps plan the transformation of a set of inputs (such as money, training, and material resources) into a series of outcomes (such as full immunization of children, or reduced infant deaths). LFA helps to set up a series of hierarchical objectives that can be progressively achieved by undertaking various activities. The goal at the top lays down the outcome that is expected out of the project and is something that makes a tangible impact on the lives of the people for whom the programme is implemented. 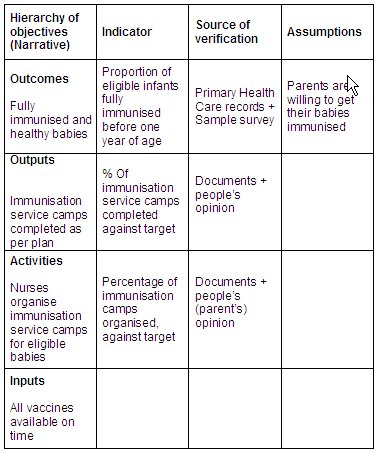 For instance, in a logframe the desired outcome from the establishment of a park with recreational facilities for children would be to have a happy and possibly healthy set of children (and perhaps parents) in the neighbourhood. Typically, this would be one order higher than the first-level output, which is the physical infrastructure of the park itself. The happier community would be something that results from the creation and actual use of the park and its facilities by the people for whom it was intended. Each objective is linked to a higher-level objective through a defined logical path detailing the activities to be undertaken. So LFA provides a critical path to reach outcomes by beginning with outlays. A monitoring and evaluation plan is also developed through the LFA that tracks progress on this path. To achieve these outputs, a number of different activities - organizing funds, finding the land, putting people in charge, creating and sprucing up the facilities etc - will be required.

The objectives, however, are often abstract and therefore one needs indicators of success for each objective. In this example, we are seeking a 'happier neighbourhood', which means we need to be able to measure the 'happiness' we are trying to create and foster. The indicators help us to determine whether progress is being made towards the objectives.

Now to return the question we asked at the beginning? Why have our large outlays on social and economic improvement not produced the results we anticipated? Partly, because the steps we discussed in a typical LFA are generally neglected in most social programmes. Schemes are drawn up without proper analysis of problems, and ambitious goals are set without linking them with the intermediate objectives. Indicators of success are not defined, and monitoring of progress is often the weakest link. Thus, the only easily recognised point of failure is the non-achievement of the objective, which is simply too little, too late, to revise our course.

Effectiveness and efficiency work to ensure that the objectives aren't thwarted, and the right outcomes result - such as in primary health mentioned above. First, they ensure that adequate funds are spent be spent on the right item; in this case on vaccines and medicines. It is common to find -in many health programmes - that there is little money left for vaccines and medicines after paying salaries of staff. An emphasis on effectiveness would throw up a red flag. And once adequate funds are provided on the right item i.e. for vaccines and medicines, an emphasis on efficiency ensures expenditure without corruption - so that 'value for money' results - such as, for example, in children getting their immunisation shots on time.

Another compelling requirement for achieving good and sustainable outcomes is the creation of 'social infrastructure' to complement physical infrastructure; this is being increasingly recognised in the latest research. The goals of a robust democracy - active citizenship, accountable governance, protection of rights, etc. - must be considered among the desired outcomes of public spending too. Public works departments offer a good example. It is widely thought that road-laying, drainage, and other tasks of public works departments are fraught with corruption, and an important goal of administrators is to reduce the instances of fraud and crime in these areas. One way to measure progress towards this goal is through enabling social infrastructure - giving local residents authority over some of the planned processes and actively inviting their inputs.

It is a fact, though often ignored, that many citizens can and would like to take an active interest in monitoring public works, and can judge whether government is delivering the desired outcomes. When people have a say in monitoring and evaluating performance, they are empowered, and it makes government more accountable. Hence to verify whether results are being delivered, people's voices have to be strengthened so that their opinions count. This needs to be done in addition to strengthening the internal monitoring systems of public works - or any other government program or plan - which should be critical and incisive at every stage of implementation. Citizens' actions in engaging adminstrations at every level should form part of the logframe in which analysis of individual programmes is carried out.

In summary, there is a need to create institutions that outlast the expenditure and passing actors on the development scene, so that more stable achievements are made. The set of rules and practices, especially those that have a direct bearing on the well-being of the people and especially the poor and disadvantaged, are very important to be set up properly. These so called 'softer' issues of social processes and institutional change are often ignored, leading to unintended outcomes and unsustainable ones, or lack of outcomes altogether. The purposefulness of the FM's urging can be judged by the creation - or absence - of intermediate yardsticks and social infrastructure. Without these, we will be doomed to more outlays, and the inevitable stasis that has accompanied them all these years.

Debashish Sircar is an IAS officer and Economic Adviser. Jaydeep Biswas works as a Governance Adviser.