Struggling to go beyond the basics

Sikkim leads the nation in per-student expenditure by quite some distance, but bureaucratic hurdles to progress common elsewhere are to be found here too. Himanshu Upadhyaya reports.
30 September 2012 -

In August 2010, the Chief Minister of Sikkim, Pawan Chamling announced the Total Literacy Mission, 2015 - a vision to transform things in the state through equitable, holistic, inclusive and globally competitive education. The state government also claims to have accorded the highest priority to elementary education, and has incurred the highest per-child revenue expenditure on education in the country - Rs.6,667 as against the national average of Rs.1,337.

Certainly, the state has successfully provided access to elementary education for all, with equitable access to boys and girls, and rural as well as urban children. But there are areas where more needs to be done.

A recently-tabled Comptroller and Auditor General (CAG) audit of the performance of elementary education in the state during 2006-2011 revealed that the Perspective Plan for the development of education was prepared by Education Consultants India Ltd in May 2003. Eight years from that date, the department hasn't still initiated any action to get the approval of the government to begin implementing the plan. Indeed, after spending Rs. 6.57 lakhs on preparing the document, the department also didn't care to incorporate any of the suggestions voiced by the consultants in the annual plans it prepared.

The planning process for the annual plan ideally starts at the habitation level, and moves upward to block, district and state levels. Also, annual plans should ideally flow from the Perspective Plan. However, the audit scrutiny revealed that annual plans were prepared by the Secretary, Human Resource Development Department without obtaining inputs from District Education Officers (DEOs). CAG report states that annual plans didn't contain any targets or strategies to ensure universal retention, improvement in educational outcomes etc.

Indeed, it appears that the only purpose for which the Annual Plans were made was to avail budget outlays on a year-to-year basis.

The grand announcment of the Total Literacy Mission did not spur the department into much action, either. The establishment of the State Council of Education Research and Training (SCERT) was notified in September 2010, but even a year later, it had not been actually constituted, says the CAG audit. There was also a promise to embark on a Teacher Training Mission, and to formulate a Teacher Transfer Policy, but these remained on paper as well. 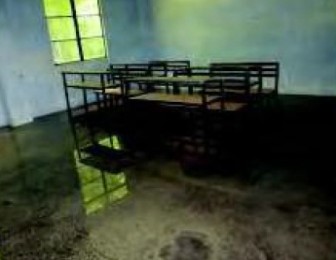 Although computers and accessories costing more than a crore were purchased and delivered to the schools, the department didn't develop the course curriculum and software applications. (Picture: Rain water in the classroom of Shipgyer Primary School)

In statements made in August 2010, the state promised to provide all schools with computers and internet connectivity, to facilitate computer literacy and computer aided learning. But only 15 schools out of 776 got computers along with internet facilities under the Sarva Shiksha Abhiyan (SSA) scheme. 426 computers and accessories purchased under Computer Aided Learning Program (CALP) funds were not put to use, since department had not yet developed the course curriculum, software applications and training module for teachers. Various important committees such as the State Advisory Committee and State Quality Education Committee, envisaged under the RTE framework, had not been constituted as of November 2011.

While the state boasts of the highest per-child spending on education, there was a 37 per cent shortfall in the funds it was supposed to contribute to SSA. The central government, for its part, wasn't doing any better - it indulged in short release of its share in SSA funds by 31.90 percent.

While the state has a very positive Pupil-Teacher-Ratio on average, there is a concentration of excess teachers in easily accessible areas, affecting the quality of education in remote areas. Records in respect of South District revealed that 42 out of 107 Junior High Schools had excess teachers, whereas 18 schools in this district suffered from a dearth of teachers.

The audit team selected 40 schools all over the state to verify this. Its joint inspections with department officers and head teachers showed a concentration of teachers in excess to the needed strength in 32 schools, and a shortage in two. This was the case despite the department's notification in February 2010 that laid emphasis on transferring excess teachers to the schools that had shortages.

In October 2009, state government amended the Teachers Recruitment Rules, 2008 and prescribed the minimum qualification for recruitment as a primary school teacher as 'Senior Secondary Pass with professional training of two years in DIET or equivalent'. Scrutiny of records in 40 schools showed that 124 teachers (out of 324) did not possess this minimum qualification, and were untrained as on March 2011. The percentage of trained teachers was comparatively better in Primary Schools (76 percent) that in Upper Primary Schools (56 percent). North district fared worse on this count than the three others.

In September 2010, state government implemented Advancement of Educational Performance through Teacher Support (AdEPTS) survey in 18 schools, covering 267 teachers of elementary schools. While none of the teachers scored 'A', 80 per cent scored 'B' or 'C' and the remaining 20 per cent got 'D'. Similarly in order to gauge teaching learning processes in classrooms, the department carried out the Basic Achievement Survey in 112 schools in February 2011. The survey results showed that while most students (82 to 97 per cent) were average or below average in Mathematics, 56 to 69 per cent were less than average in Environment Studies/Science and Technology.

In order to improve the quality of education in the state, the department had allocated funds to initiate two interventions: a Learning Evaluation Program aimed at developing language reading material and science and mathematics kits, and a Computer Aided Learning Program (CALP). The first one failed, since the department didn't actually spend the funds earmarked for it!

For the CALP, Rs.50 lakhs per district was allocated for training teachers, creating infrastructure, developing and producing state specific e-learning materials and sensitising statutory bodies. But although computers and accessories costing more than a crore were purchased and delivered to the schools, the department didn't develop the course curriculum and software applications, or even the training modules for implementing the program. It was nothing more than a purchase contract for computers, which were never used.

The excessive focus on creating 'infrastructural access' seems to be holding back the state, and preventing it from moving beyond achieving the basic indicators of literacy and enrolment. It is evident that mere policy announcements are not enough. A serious review of the system to understand why the highest per-child expenditure in the country has not delivered evident learning outcomes is needed, and may even help prevent other states from repeating Sikkim's mistakes.

BACK TO SCHOOL : Meaningful restart of education is critical
MORE ARTICLES
on similar topics ...
EDUCATION