Tunnels in the hills

The construction of dam-related tunnels in the hills of Sikkim has led to questions about their potential impact on the fragile ecology of the region. Ratna Bharali Talukdar reports.
09 March 2012 -

The popular perception of the construction of mega dams to generate electricity, particularly in North-Eastern states, is not positive. The various movements against such projects have presented us a uniformly bad picture - of adverse impact on the fragile ecology of the region, as well as the lives and livelihoods of people in downstream areas.

The situation in Sikkim is no different. When a devastating earthquake of magnitude 6.9 on the Richter scale shook the state on 18 September 2011 claiming 77 lives, this debate took centre-stage in this Himalayan state. The tremor either damaged or collapsed houses and buildings of 53,172 families - nearly half the total households in the state.

North District was the worst hit by the tremor in the state. With a tiny population of 43,354 according to the 2011 Census, and strategically located bordering China, one needs to obtain a special permission to enter into the district itself. The river dam site of the 1200 MW Teesta phase III, the largest river dam in the state, designed and developed by Teesta Urja Ltd (TUL), is located in the heart of Chungthang sub-division of this district. It was the worst hit area in the earthquake, where not a single house was spared by the tremor.

The mega dam, which is described by the developers as a state-of-the-art and a run-of-the-river project, has been constructed at the confluence of two torrent rivers Lachen-chu, and Lachung-chu in Chungthang village. These mountain rivers are the sources of the mighty Teesta river, the main water course and lifeline of Sikkim. These two rivers also flow through Lachen and Lachung - the pristine land of Bhutia people.

TUL itself lost 17 labourers and officials during the earthquake. The construction work suffered subsequently too, as most of the contract labourers worked in the dam site fled immediately after the tremor, fearing for their lives.

The company has completed construction of the 14-km-long main tunnel of the dam (out of a total of 34 km of tunnel construction) for diversion of the main river course through the main hill of Chungthang, that was devastated most during the tremor. This tunnel connects the dam site at Chungthang to Singhik in Mangan, the district headquarter. T R Dhiman, the General Manager of the company says the river will be diverted to Singhik point through the main tunnel, from where there will be a natural drop of about 800 meters, to generate electricity.

The tunnel remained safe despite the earthquake, and the company authorities opened it to use as an alternative route for carrying thousands of tremor victims stranded in those areas by massive landslips.

But the earthquake has caused delays, inevitably. "Our mission is to commission this project at the shortest possible time period so that optimal benefits can be accrued to the beneficiary states as well as the state of Sikkim. The project started in 2008 was originally targeted to be commissioned in March 2011. However, with the tremor and its subsequent situation, it would now be delayed for another 8 months," Dhiwan says. Stressing the company's focus on time, he says that despite a large number of contract labourers leaving the project site immediately after the earthquake, TUL resumed construction within a two weeks. 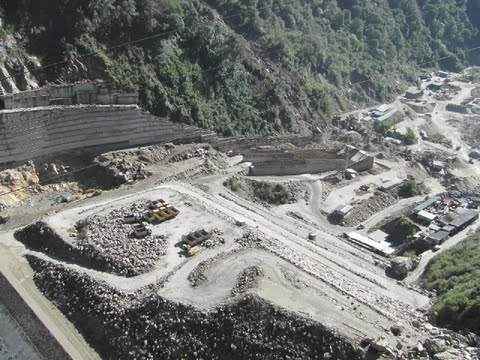 Sikkim, which has hydro-power potential of about 8000 MW, is coming up with a number of hydro-electric projects to boost its economy.

•  The power to protect rivers
•  Massive dam plans for Arunachal

Dhiman says none of the local people were displaced while constructing the dam, and that the company is using sophisticated technology to protect the fragile land and ecology of the hills. Dhiman claims that "it is the best studied and investigated project in the country" by various agencies with the most dependable hydrology, with data of over 30 years to determine the dependable flow of the river.

"Though the tremor had caused devastation in the entire district, damaging almost all the houses, our project site was completely safe. We regret the death of our persons. But these casualties and injuries were sustained only on the roads due to falling boulders from landslides caused by the earthquake and its aftershocks, and not due to collapse of the tunnel or damage of project site", he says. The company has made provisions for compensation to all of them at per company rules, apart from the government sanctions.

However, locals allege that the blasting inside the hills, done by various companies while constructing the tunnels of hydroelectric projects in the state, was primarily responsible for damaging the buildings. This was only compounded by huge landslips during and aftershocks of the tremor.

"The hills and mountains in Sikkim are naturally fragile and therefore massive landslips are frequently experienced in most parts of the state. Due to blasting of the hills for construction of the tunnels of hydro electric projects the hills have become more fragile and therefore when the earthquake hit they shook violently leading to collapse of the houses and buildings and destruction of roads by landslips of unimaginable magnitude. Nature too has an endurance limit. However this is often forgotten, due to which such devastation has occurred," says Lendup Lepcha President, Chungthang Panchayat.

This is also the common perception among thousands of earthquake-hit people in Sikkim. The state government, however, has brushed aside these apprehensions. "While individual houses and government office buildings have been damaged to a large extent, the construction site of the dam was safe, and they could resist the shaking," says T W Lepcha, member of Lachen-Mangan legislative assembly constituency. He also drew this reporter's attention to a different issue, saying, "This reveals the housing pattern of the state is faulty. Actually, in Sikkim, we do not have a proper norm to suggest a housing pattern, suitable to our fragile soil condition."

The MLA also says the state government has backed hydro-electric projects because the state, being located in a fragile region, does not have many options for growing its economy. The only industry in Sikkim is tourism, and it lacks suitable land for agriculture production or other means of occupation. In such a situation, the hydro-power energy is the most cleanest and green energy that can be harnessed for revenue generation as well as for the process of nation-building, he says.

"Hydro power is the most economical source of energy. In Sikkim, we are not even either consuming it, or using it for irrigation and other purposes. These rivers, mostly torrent in nature are just flowing down, leaving huge potential for power generation" he adds. The politician also argues that the government is keeping in mind the issues of the fragile ecosystem and the unique bio-diversity here while giving permission for construction of hydro-power projects.

Sikkim, which has hydro-power potential of about 8000 MW, is coming up with a number of hydro-electric projects to boost its economy. Most of these are run-of-the-river projects, which unlike regular dam projects do not create large-scale displacement because the electricity is generated with much smaller reservoir area. In such projects, penstock pipes are laid to channel water to a turbines at a lower elevation; in Sikkim too, a number of tunnels have been constructed inside the hills at project sites throughout the State.

Krishnamurthy, senior GM of the company says, people talk about the impact of blasting without really knowing much. The hills are too big to be damaged by the blasting, he claims. While one can certainly feel a minor amount of vibration at the time of a blast, an earthquake is a much bigger thing - thousands and thousands of times more powerful than the blasting.

"The hills are nearly 200 to 500 meters above the tunnels, and it is just impossible to have any lasting impact from blasting. Even with wild blasting, one cannot have much of an impact on the hills. However, the blasting that TUL has been carrying out is pretty controlled. We have used hi-tech blasting equipment. We do not undertake any law-less blasting. To ensure safety to the soil condition, we have used a series of delays while operating a blast," he adds.

Explaining how the company has been taking utmost care during blasting to protect the soil, Krishnamurthy claims that in order to reduce the vibration impact the company has used the most modern technologies. It has the provision of measuring the vibrations from a particular distance. There is an instrument to measure the vibration. "A normal old building can resist 10 mili-meter vibrations per second. Our blasting vibration never crossed even one mili-meter, per second. So it cannot affect the buildings and hills at all, " he claims.

He adds that he has personally given such demonstrations in many villages of North district in the state to make local people aware of such techniques.

The officials of TUL also say that during the tremor, distressed people in the state used the company's main tunnel extensively, as the main road in Chungthang was damaged heavily and even completely washed away in some portions. As road communication could not be established for several days following the shock, the main tunnel constructed to make diversion of the river was used for carrying both people and goods - which was completely a new experience for the people. The company also airlifted stranded people by drafting its chopper service.

Lepcha claims that the new experience of traveling through the tunnels have made the local people confident of such provisions, and they are now demanding construction of such tunnels elsewhere too. In fact, the chief Minster Pawan Kumar Chamling has also laid a foundation stone of a six-km-long tunnel in Theng point of Chungthan sub-division in response to this demand, he says. Lepcha traveled through the tunnel himself by car immediately after the tremor to reach Chungthang, to give local people confidence in this route.

"The state government has been assured by the construction agencies that tunnels are being constructed with utmost care and considering the fragile soil conditions. Still, we are not denying the apprehension among a section of local people. For instance, the local people of Lachen and Lachung areas are still opposing hydro-power projects in their respecting areas over rivers Lachung-chu and Lachen-chu. The chief minister is waiting till the people come to a conclusion. While moving for development activities, we also do not want to antagonise our people," he adds.

Ratna Bharali Talukdar is a freelance journalist based in Guwahati, Assam. She received the Chameli Devi Jain Award for Outstanding Women Media Person and the Ramnath Goenka Excellence in Journalism Award in 2005 and 2006 respectively. Reporting for this article was made possible by the Inclusive Media fellowship of the Centre For The Study Of Developing Societies.