Floods in Sutlej, made in China

An early warning by China on impending floods in the Sutlej river helped avert major loss to human lives in June. Yet, India's disaster preparedness plans have been found wanting. India still does not have reliable information from China about glacial lakes that are prone to flooding the Himalayan rivers, writes Sudhirendar Sharma.
11 July 2005 -

After flooding the markets with its cheap goods, China has now become the cause for recurrent floods in India. The Pareechhu (glacial lake on the Pareechhu river in China, a tributary of Sutlej) disaster may slip into hydrological history but the chances of flash floods will continue to haunt the lower riparian region across the border in Himachal Pradesh. With flash floods having ravaged the entire region twice in the past five years, the diplomatic failure in engaging the Chinese into sharing vital data on river hydrology within its territory seems glaringly evident. 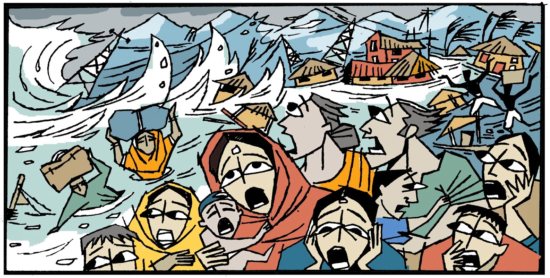 Five years ago, on the fateful night of 1 August 1, 2000, a 50-ft high wall of water in the Sutlej river had swept away 200 people from Kinnaur and Shimla districts in Himachal Pradesh. Caught unaware, the government had dismissed the incident as freak natural phenomena caused by cloudbursts. China too had attributed the floods in Sutlej to 'natural' causes on the Indian side. It was ISRO scientists who stunned and corrected that view with a detailed study of satellite data. Had it not been for them, the attribution to cloud bursts would have sustained, as before.

This time, an early warning by China on the impending disaster brewing behind the glacial lake formed in July 2004 on the Pareechhu river helped avert major loss to human lives. Yet, the country's disaster preparedness plans have been found wanting on several fronts. No sooner had the flood waters receded in the river, the government covered-up its shortcomings by announcing that the situation has been under control as the 'worst is over'.

The 1,500 MW Nathpa-Jhakri Hydroelectric Power Station on the banks of Sutlej has had to shut down four times, since the first silt deluge in the river in 1993, owing to such floods.  •  Was the Bhakra dam worth it?
•  An election year scarcity

Pareechhu lake may have vanished and flood waters in Sutlej may have receded but the worst is far from over. Given the geological rumblings and the changing climate in the Himalayas, rivers often carry the brunt of such abrupt variations in the upper reaches of the treacherous mountains. Two disasters in quick successions in the Sutlej basin are indications enough that the 334 glaciers in the river basin may be in a state of grave unrest.

Secrets of this river basis lay embedded in the mountains. The Pareechhu river which starts as a trickle on the upper reaches of the Himalayas within the Indian territory, re-emerges like a dinosaur a few kilometres later after meandering inside the Chinese territory. 'Whatever might happen to the river inside our territory is nobody's concern', China seems to reiterate stubbornly and frequently. Neither does China permit experts to conduct surveys inside its territory nor does it share hydrological data.

The politics of dominance is evident! China does to India what India does to Pakistan and Bangladesh, hiding vital hydrological data on the transboundary rivers like the Indus and the Ganges as defence secret. However, locked up in this secret are 24 glacial lakes which are as vulnerable as Pareechhu lake, ready to burst at their seams at the slightest of climatic provocations. The signs are ominous!

Using global climate data, the Washington-based Worldwatch Institute had for long warned that the rivers originating in the Himalayas are expected to swell abnormally and then fall to dangerously low levels. Basing its argument on the fact that the Himalayan glaciers were rapidly melting, the report had also warned about the possibility of sudden bursting of glacial lakes due to above normal discharge. Those warnings have already come true.

Some diplomatic manoeuvring has been underway in the recent past for sharing hydrological information but there is no evidence of data exchange during the recent floods. Reports indicate that in the absence of any authentic information on the depth of the Pareechhu lake, Indian authorities were continuously making guess estimates to gauze the actual impact. That the glacial lake was 123 hectares in size was long known from satellite imageries, it was the depth of the lake which was an area of concern.

Sutlej floods go beyond the conventional framework of flood mitigation and disaster management. From contentious cross-border diplomacy to abrupt climatic change and from transboundary water sharing to impending ecological destruction, these flash floods spillover to plug hydroelectric power production in the hills alongside reducing reservoir storage capacity downstream as well. The fact that these floods have started occurring frequently adds to the water woes.

The 1,500 MW Nathpa-Jhakri Hydroelectric Power Station on the banks of Sutlej has had to shut down four times, since the first silt deluge in the river in 1993, due to such floods. Precariously located along the swirling waters of the rivers, the power plant may well be the first victim should glacial lakes in the upper reaches breach again. The Gobind Sagar reservoir feeding the legendary Bhakra Hydroelectric Station is the next victim as the river empties near 5000 ppm (50 grams of silt per litre of water) of sediment load in the already shrinking dam.

New Delhi's handling of the present crisis will determine the depth of its understanding. From Himachal Pradesh in the north to Arunachal Pradesh in the east, there are rivers that have their basins hidden in our neighbour's territory. Unless deft diplomatic handling brings the upper riparian nation to the negotiating table, India will be at the receiving end of the disasters that are waiting to happen. However, much will also depend on how indeed India positions itself as an upper riparian to other neighbours.