Although telecentres have caught the imagination of government, their adoption is caught in a false pedagogy that treats entitlements as services and citizens as customers who pay service charges. The focus on putting a price on governance must be stemmed, writes Vivek Vaidyanathan.
06 March 2008 -

Over the past few years, there has been a lot of talk about Information and Communication Technologies (ICTs) as the next big thing for socio-economic development. This hope is based on the fact that ICTs can accelerate decentralisation, transparency and citizen-centric participation, and through these revitalise and rejuvenate democracy. Certainly ICTs possess a transformatory power, but to understand the potential vis a vis development needs, a closer examination is needed.

In this article, I examine the 'telecentre', which - as an amalgam of many different technologies - appears to have caught the imagination of government, development practitioners, funding agencies and corporates alike. A telecentre is a public place where people can access computers, the Internet, and other digital technologies that enable people to gather information, create, learn, and communicate with others while they develop essential 21st-century digital skills. While each telecentre is different, their common focus is on the use of digital technologies to support community, economic, educational, and social development-reducing isolation, bridging the digital divide, promoting health issues, creating economic opportunities, and reaching out to youth for example. The above definition of a telecentre by Wikipedia quite aptly captures its essence.

There are literally thousands of telecentre initiatives that dot the country, most of which are a mix of government pilot projects, NGO-driven initiatives and private for-profit projects. Now the Government of India is getting into the picture in a much more structured manner and is rolling out 100,000 'Common Service Centres' (CSCs) for 600,000 villages as part of its National E-Governance Programme (NeGP).

The potential of telecentres

A telecentre has the ability to forge together initiatives that weave disadvantaged communities into the mainstream, initiatives which bring together divergent needs of a community and create opportunities which lead to overall social and economic development. Typically, a telecentre would start out by providing a pool of development services, providing information related to best practices related to agriculture, health, education, livelihood opportunities & computer education. In addition to this, it would provide utility bill payment services.

By doing this the telecentre lays the groundwork for different sections of the community to come together and take part in government activities. While one might be inclined to dismiss these activities described above as trivial, it must be kept in mind that this is but the first step towards connecting citizens with government.

The ability for citizens to create and shape policy and the role played by telecentres in this regard is an area whose potential is only now unfolding.

•  Information or technology?
•  E isn't everything
•  Lessons from good telecentres

There are also initiatives by the government to make e-governance a two-way process. For instance, the government has started putting together draft policy papers on the Internet and invites inputs as part of various consultation processes. Communities which are directly affected by government plans and policies have a real chance to provide input, when such solicitations are brought to their attention. Also, in many cases, individual telecentre initiatives run by government at the district level have well established online grievance redressal systems which allow citizens to make complaints against erring government officials/public servants; complaints which are directly looked into by authorities at the highest level.

Not to sit and admire these accomplishments at the risk of losing sight of the larger picture, but the possibilities described above would have been very difficult to imagine and enforce even a few years ago. The ability of ICTs (in this case, telecentres) to bypass traditional encumbrances thus goes a long way toward bringing about citizen participation in governance.

Of course, participating in governance is quite different from shaping governance (being involved in the policy planning process from scratch). So far we've looked at citizens being able to access information on development services and the ability to talk back to government. This is only the beginning; going further, the ability for citizens to create and shape policy and the role played by telecentres in this regard is an area whose potential is only now unfolding.

A major development in this regard is the concept of 'community informatics'. While plenty of information can be made available at a telecentre, the validity of such information can vary greatly. How can this be tackled? Could citizens themselves validate - or even create - data using their local knowledge, so that its veracity is improved? The most likely answer to this question lies in community informatics (CI), which is a simple yet effective and participatory mechanism. CI refers to the process of information gathering being undertaken by communities in a bottom-up, participatory and collaborative manner so that this information directly complements and or authenticates institutional data, which then feeds into policy in that relevant domain.

CI also allows direct monitoring of government schemes by local communities. For instance, it is well known that the number of Below Poverty Line (BPL) families is often under-reported in government estimates, simply because governments are loath to be seen as presiding over great poverty. But under-counting doesn't eradicate poverty, and the sufferings of the uncounted are very real. CI can help them overcome such neglect; an enumeration process undertaken by the community itself would be more definitive in identifying BPL families, allowing it to challenge the empiricism of institutional data. 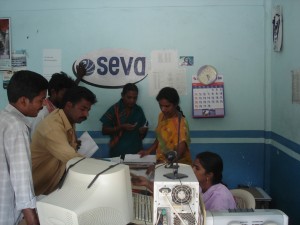 What role does the telecentre play in this process? While the actual data gathering and collation takes place offline, the telecentre is the space where the community (through volunteers) gathers and uploads the information on to computers. Where there is Internet connectivity and linkages to the government backbone network (State Wide Area Network), such data can directly feed into that system too, and be more representative than institutional data. Even if there is only intermittent connectivity, a printout of the data can be physically delivered to the government office where it gets processed and feeds into policy (Such work-arounds are being resorted to by quite a few pilot projects initiated by governments).

As governments move to a culture of e-governance, more and more data gets digitised and the opportunities for communities to participate in the overall development process increase exponentially. Once there is a certain regularity and comfort with this process, the telecentre becomes this space where people come to acquire information, hold community meetings, to an extent where government officials recognise this as an important platform and use it to interact with the community.

Thus, the telecentre acquires a certain credibility and legitimacy, by which it has the power to shape and change power equations within the community itself. In the Indian context, one gets to see pilot projects that have worked exactly this. There are specific projects which work exclusively with women's collectives, Dalits and other marginalised groups. By firmly keeping the ownership of telecentres with the constituencies they work with, many of the sponsor and volunteer organisations have managed to initiate a change in the power equations. And although there has been opposition from those sections of the community who are most likely to lose out, the changes are evident and sustainable.

At a very practical level, more development-domain departments (health, education) must be linked to telecentres in a way that citizens are in a position to benefit from entitlements that are met by these departments. This will go a long way in realising the potential of telecentres.

But there are shortcomings too. There is also an urgent need to challenge - and change - the 'efficiency' based pedagogy which is at play while describing the working of a telecentre. In the Indian context, telecentres (specifically those run by the government) have mainly been perceived as tools of e-governance. Some of the more famous initiatives are Akshaya (Kerala), Rural E-Seva (West Godavari- Andhra Pradesh) & Bangalore One (Bangalore). Telecentre functionaries describe these as 'one stop shops' where one accesses services like utility bill payment, procurement of digitized land ownership records and obtaining birth and death certificates (customers typically pay a service charge which is shared between the entrepreneur and the government department providing the service). Apart from the government functions, a telecentre may also run commercial functions like printing, photocopying etc.

The description of 'entitlements' as 'services', of 'citizens' as 'customers', and the notion of a 'service charge' are pointers towards this pedagogy. The focus of putting a price on governance is rather unfortunate and must be stemmed at the earliest. Telecentres should be thought of the same way as health centres, education facilities and roads - as public infrastructure.

What is most appalling is that nearly universally, the only kind of sustainability that ever gets talked about is that of financial sustainability - that the telecentre has to be in a position to fund itself in a matter of a year or two, and in this melee, concepts of community ownership, participation and social sustainability are thrown out the window. The 100,000 Common Service Centres the government is promoting through 'Public Private Partnership' model also suffer from this. The telecentres will be auctioned out to highest bidders, who in addition to providing government services can offer commercial services and in this way recover their investments. Clearly, that is an invitation to focus on the latter, although the purported purpose of the government in establishing the CSCs is the former.

Vivek Vaidyanathan is with IT for Change.