Timbaktu Organic is scaling up

A silent crisis, similar to the one foretold above, has already crept up on us in the sphere of health and nutrition. Even as more and more people look better fed an epidemic of diabetes is sweeping across India. In Mumbai there are now hoardings advertising special health insurance schemes for people afflicted by diabetes. One of the reasons for this is that over the last 50 years there has been a dramatic decline in the variety of grains consumed in India. Moreover, millets which provided an essential nutritional balance have virtually vanished from most kitchens across India.

Over the last one decade 758 farmers have committed suicide in Anantapur district alone. Between 1998 and 2003 it is estimated that one lakh farmers have killed themselves in different parts of India.

Timbaktu is of the view that this is due not only to increased indebtedness of farmers but also because of mono-cropping which entails higher risks in terms of both production and marketing.

•  Nothing unscientific about it
•  Persistence with organic pays off

There is a complicated link between this reality and why farmers across India are killing themselves in despair. Timbaktu Organic is one of the initiatives that seeks to grapple with these multiple crises in a composite manner. This is an initiative that simultaneously aims to foster ecological balance, food security and economic democracy through an innovative form of socially engaged investing.

Timbaktu Organic is the brain-child of Timbaktu Collective, a well-known NGO based near Chennekothapalli village in Anantapur District. It is a collaboration of Adisakthi Thrift Cooperative Society, Chennekothapalli and the Timbaktu Collective. The former handles the work of marketing the organic produce, through its Adisakthi Dharani program and the latter manages the work of promoting organic farming with the dryland small-holder farmers. Timbaktu Organic is a label used to refer to the initiative as a whole and is also the brand name used by Adisakthi Dharani for marketing its products. TO is run by a core group of members of the marketing and farming teams of Adisakthi and Timbaktu. Mary Vattamattam heads Timbaktu and A Chennakesavulu heads Adisakthi; both are based at Chennekothapalli village.

Timbaktu Organic started in 2005 with with 27 farmers covering 80 acres in 1 village. In 2006 (current season), Timbaktu Organic is working with 160 farmers, covering 480 acres in 8 villages. The aim is to enhance the farmers' income by at least 20%, over the three and half year period and do this through sustainable forms of agriculture. This venture builds on the existing base of the Collective's various strengths. These include the successful promotion of the Mahasakthi cooperative thrift society network, composed of the Adisakthi, Ananthasakthi and Mahilasakthi cooperative societies which together now have a membership of 8023 women part spread over 119 villages. 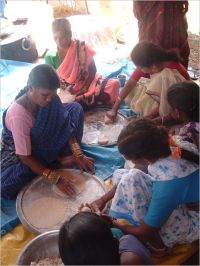 In the same twelve years that this network came up the Collective has also done substantial work on regeneration of wastelands and watersheds. Adisakthi, which is the most established of the three cooperatives, is taking up the marketing component of Timbaktu Organic, through its new division  Adisakthi Dharani.

Timbaktu Organic is aiming to break through the mono-cropping of ground-nut, which has severely depleted the soil. The counter to this is promotion of millets and pulses through organic farming methods. But without marketing support for the organic produce, the farmers could be in even deeper trouble than they are now. This in turn means raising public awareness about the importance of millets.

It is not difficult to make a case for millets. They are very high in nutritional value and help to prevent diabetes. They can grow in rain-fed conditions and are thus relatively more eco-friendly than paddy rice. They do not require huge dams for irrigation and the consequent displacement. But all of these reasons do not automatically add up to a better price for millets. The market for cereals, at present, heavily tilted towards paddy and wheat, offers too low a price for millets thus making it an unattractive proposition for farmers. Thus the key challenge for Timbaktu Organic initiative is to make a large enough impact on public choices so that the market value of millets improves along with the expanding demand for organic food in general.

As noted earlier, at present 160 farmers have committed a total area of 480 acres for organic production. Two complete cycles of procurement, processing, storage, packaging and sale of organic produce have already been completed. The farmers have been participating in organic fairs, bazaars and food festivals, both in urban and rural areas. In addition millet food promotion exercises have been organised in all the organic farming villages and local towns. A local millet hotel is being set up and trials have been initiated with local bakers on millet baked food stuffs. 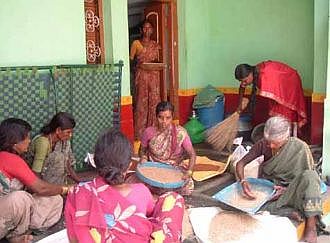 So far Timbaktu Organic's customers include a number of residents of Chennekothapalli, Timbaktu schools and offices and farmers. A network of urban buyers in Bangalore, Chennai, Pondicherry and Hyderabad (with some presence in Mumbai, Delhi, Pune) buy the organic produce regularly. The products are sent by regular transport service companies. The retail end is mostly organic food stores and processing units. Demand from the urban market has been huge; in the second business cycle, most of the stock was exhausted within three months of the procurement. It is significant that trade enquiries far outweigh the production estimate for the coming two seasons.

So far this initiative has been supported by investments by participating farmers, the Adisakthi MACT Society, loans from the friends of Timbaktu community  as well as grants from Sir Dorabji Tata Trust in Mumbai, the Centre for Sustainable Agriculture Hyderabad and a seed grant from the Collective itself.

The immediate expansion plans of this business involves support marketing of all the organic produce of the farmers this season (2006). And this now requires an additional capital investment of Rs.24 lakhs. Timbaktu Collective is hoping to raise this capital by inviting individuals to do socially responsible investing. In line with that, is inviting individuals to make a loan to Timbaktu Organic at 0-5% per annum interest rate for a period of five years. The minimum amount for such loans in Rs.10,000/-.

The premise behind this investment model, says the Timbaktu Organic team: "development that is financially sustainable (economically viable), ecologically sound (protects and nurtures the environment) and socially conscious (benefits disadvantaged and marginalised communities), can only be triggered if the investors behind the venture encourage such a triple bottom line focus."

Timbaktu Organic's stresses that it wants the marketing venture to be driven by socially responsible or 'green' investment from concerned and like-minded individuals and firms, and not by investors looking to maximise financial return only. It also does not not want to run the operation purely on grants. The organisation wants to be able to meet the demands of its different stakeholders like any learning business organization, and acknowledges that working on a 'returns' basis ensures scalability of the venture.

Rajni Bakshi is the author of "Bapu Kuti: Journeys in Rediscovery of Gandhi" and a former Homi Bhabha Fellow. She has been working on the theme of how the market mechanism can serve the common good.